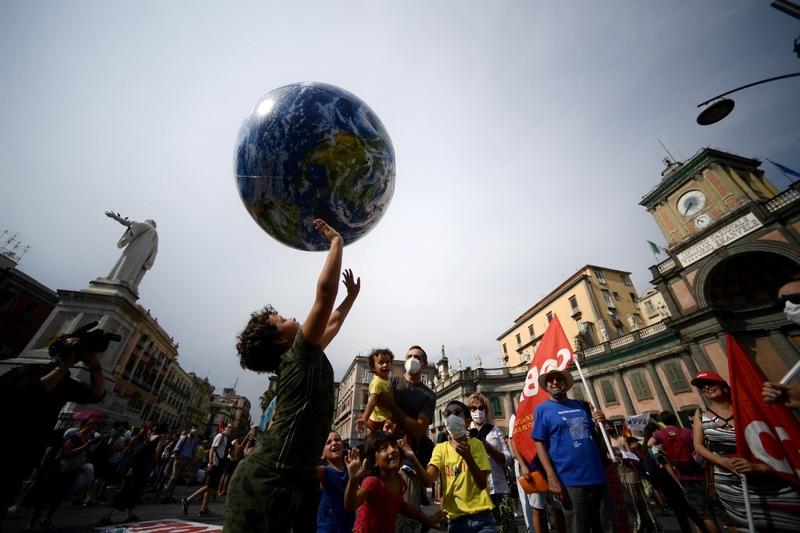 Environment ministers from the Group of 20 nations were unable to reach full agreement on key climate goals, just 100 days before a critical international conference kicks off.

After marathon negotiations that ran through the night, the ministers couldn’t find common ground on phasing out coal or how much to limit global warming, Italian Ecological Transition Minister Roberto Cingolani said at a press conference Friday in Naples.

The divisions among the G20 nations bode badly for United Nations climate talks set to start Oct 31 in Glasgow. Leaders and diplomats including US presidential climate envoy John Kerry have repeatedly stressed that the meeting, known as COP 26, may be the last chance to set international policies that would prevent the planet from warming more than 1.5 degrees Celsius from pre-industrial levels, which scientists say is key to staving off the worst impacts of climate change.

“The G20 accounts for 80 percent of all global emissions,” Patricia Espinosa, head of the UN’s climate change secretariat, said during the meeting. “There is no path to 1.5C without the G20.”

Ending the use of coal, the dirtiest fossil fuel, was a major sticking point. Italy, which is hosting the G20 meeting, pushed to include that goal within the official communique that will be issued Saturday. However, a number of countries including India and Russia resisted

Ending the use of coal, the dirtiest fossil fuel, was a major sticking point. Italy, which is hosting the G20 meeting, pushed to include that goal within the official communique that will be issued Saturday. However, a number of countries including India and Russia resisted, Cingolani said.

“It is frustrating that despite the progress made by some countries, there was no consensus in Naples to confine coal to history,” said Alok Sharma, the incoming COP26 president, following the meeting. The question over phasing out coal will now be kicked to the gathering of G20 leaders in October, taking place in the days immediately before COP26 starts.

As the talks dragged on overnight from Thursday into Friday, the US, Canada and Europe lobbied for including the goal of limiting warming to 1.5C. But other countries were unwilling to go beyond the 2015 Paris Agreement’s less ambitious target range. In the end, the text recognized that the impacts of climate change at 1.5C are much lower than at 2C.

This year is seen as a crunch time in climate policy, because all 197 countries in the Paris accord must submit enhanced national plans for cutting emissions. So far only 97 have done so, the UN’s Espinosa said. At the meeting, all countries agreed to submit their updated plans before COP26. The nations also reached agreements on other fronts, such as ensuring a green recovery from the pandemic.

Indonesia, the world’s eighth-largest source of carbon emissions, submitted a new national plan during the meeting. However, it had the same top-line emissions targets proposed five years ago. Its longer-term goals show that the country plans for peak emissions in 2030 and could reach net-zero greenhouse-gas emissions by 2060 or sooner.

“Indonesia should step up its efforts to address the climate crisis,” Tjokorda Nirarta Samadhi, director of the World Resources Institute’s Indonesia office, said by email. The country should “commit to stop investing in new coal plants and reach zero deforestation by 2030, coupled with substantial reforestation.”

The next chance for energy and environment ministers to discuss the issues will come as soon as Sunday. Sharma has organized a two-day meeting for a broader group of countries in London, where he hopes they will be able to find common ground on key points that will be examined at COP26, including cross-border carbon trading.

Small island nations, which are some of the most vulnerable to the impacts of climate change, said they were “really encouraged” to see a strong debate at the G20 meeting, with countries in favor of tough action refusing to back down. Still, the group noted the continued powerful political influence of the fossil-fuel industry.

“The value of the coal, oil, and gas industry is not worth the losses we are seeing globally,” Ambassador Diann Black-Layne of Antigua and Barbuda said by email. “This does not make economic sense but demonstrates that the politics of the fossil fuel industry seems to be far more important than the rest of the global economy and its people.”