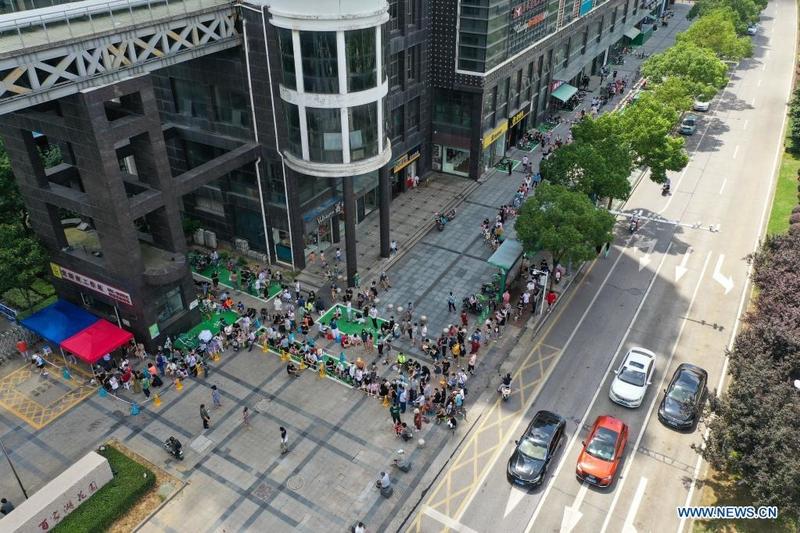 BEIJING/NANJING - The Chinese mainland on Friday reported 13 new locally transmitted COVID-19 cases and 22 imported ones, the National Health Commission said in its daily report on Saturday.

The sole locally transmiatted case in Sichuan involved a 26-year-old woman who took a flight from Nanjing on July 17 and arrived in Mianyang the next day.

She was diagnosed as a confirmed case on Friday during mass testing among travelers from Nanjing, the capital city of east China's Jiangsu province, according to Sichuan's provincial health commission.

Nanjing with a population of more than 9.3 million has registered a cluster of local cases after positive results were found during routine nucleic acid testing for its airport staff.

The remaining 12 new local cases were reported in Nanjing, which also saw four asymptomatic ones.

By Friday, the number of locally transmitted confirmed cases in the latest COVID-19 outbreak in the capital city of Jiangsu province had risen to 35, with another 18 asymptomatic ones, according to the Nanjing municipal health commission.

All the new infections reported on Friday are staff of the city's airport and their close contacts, said Yang Dasuo, deputy director of the municipal health commission.

All the 35 confirmed cases are under treatment in a designated hospital and are in stable condition, Yang said. The 18 asymptomatic ones are in isolation and under medical management in the same hospital, the official added.

Among the 22 new imported infections, five each were reported in Guangdong and Yunnan, four in Fujian, three in Sichuan, two in Shanghai and one each in Tianjin, Henan and Hubei.

No new suspected cases or deaths related to COVID-19 were reported in the day.

READ MORE: More than 1.5b COVID-19 shots administered on mainland

Also reported were 22 new imported cases, of which five each were reported in Guangdong and Yunnan, four in Fujian, three in Sichuan, two in Shanghai and one each in Tianjin, Henan and Hubei

The total number of confirmed COVID-19 cases on the mainland reached 92,497 by Friday, including 681 patients still receiving treatment, 16 of whom were in severe conditions.

A total of 87,180 patients had been discharged from hospitals following recovery on the mainland, and 4,636 had died as a result of the virus.

There were three suspected COVID-19 cases on the mainland on Friday.

As of Friday, more than1.52 billion doses of COVID-19 vaccines have been administered on the Chinese mainland.