A French patrol boat, on which nine magistrates and three Ivorian police and gendarmerie officers spent two days to strengthen their capacities and better combat the piracy that is ravaging the Gulf of Guinea, is seen in the port of Abidjan, in Abidjan, on Nov 8, 2019. (PATRICK FORT / AFP)

The number of attacks on vessels globally jumped 20 percent last year to 195, with 135 crew kidnapped, the International Maritime Bureau’s Piracy Reporting Centre said in a Jan 13 report. The Gulf of Guinea accounted for 95 percent of hostages taken in 22 separate instances, and all the three hijackings that occurred, the agency said.

The number of attacks on vessels globally jumped 20 percent last year to 195, with 135 crew kidnapped, the International Maritime Bureau’s Piracy Reporting Centre said in a Jan 13 report. The Gulf of Guinea accounted for 95 percent of hostages taken in 22 separate instances, and all the three hijackings that occurred, the agency said

The attacks have pushed up insurance and other costs for shippers operating off West Africa, with some resorting to hiring escort vessels manned by armed navy personnel. AP Moller-Maersk A/S, which transports about 15 percent of the globe’s seaborne freight, said decisive action needs to be taken.

“It is unacceptable in this day and age that seafarers cannot perform their jobs of ensuring a vital supply chain for this region without having to worry about the risk of piracy,” said Aslak Ross, head of marine standards at Copenhagen-based Maersk. “The risk has reached a level where effective military capacity needs to be deployed.”

The Gulf of Guinea encompasses a vast tract of the Atlantic Ocean that’s traversed by more than 20,000 vessels a year, making it difficult for under-resourced governments to police.

Fringed by an almost 4,000-mile-long shoreline that stretches from Senegal to Angola, it serves as the main thoroughfare for crude oil exports and imports of refined fuel and other goods.

Twenty-five African governments, including all those bordering on the gulf, signed the Yaoundé Code of Conduct in 2013 to tackle piracy. It aims to facilitate information sharing and established five maritime zones to be jointly patrolled, but has been only partially implemented and most navies remain focused on safeguarding their own waters.

Bertrand Monnet, a professor of criminal risk management at France’s EDHEC Business School who has studied piracy in Nigeria’s oil-producing Niger Delta region for 15 years, estimates that a maximum of 15 bands operate offshore West Africa, each comprising 20 to 50 members.

Hostages are usually held for ransom in Nigeria, the regional powerhouse which has taken the lead in preventing attacks. Its government plans to commission nearly US$200 million of new equipment this year, including helicopters, drones and high-speed boats, to boost the navy’s capabilities.

Nigeria is committed to “ensuring that this menace of piracy is gotten rid of in our waters, so that those with legitimate business in shipping, fishing, and oil and gas can go about their business without fear,” Rear-Admiral Oladele Daji, commander of the Nigerian Navy’s western fleet, said in an interview.

Many shipowners favor a more muscular international effort modeled on the military response to hijackings offshore Somalia, which was the global epicenter of piracy from about 2001 to 2012. 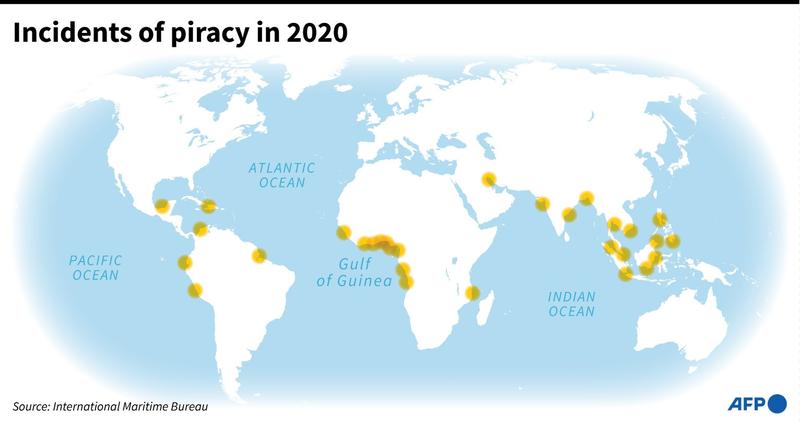 Armed guards and warships dispatched by the European Union, NATO and a US-led task force to protect vessels traveling through the Suez Canal, one of the world’s busiest trade routes linking Europe to Asia, helped bring the problem under control.

If national governments focus on their territorial waters –- the 12 nautical miles (14 miles) from their shores –- major naval powers could reduce piracy further afield in the gulf by deploying two or three frigates equipped with helicopters, said Jakob Larsen, head of maritime security at the Baltic and International Maritime Council, a Copenhagen-based shipowners’ group. He considers such support unlikely because the sea routes aren’t as strategically important as those off Africa’s east coast.

“There is little international appetite for getting involved in Nigeria’s security problems,” he said.

While the west African attacks were initially concentrated offshore Nigeria, they’ve since spread to waters off Benin, Equatorial Guinea, Gabon, Ghana, Togo and Cameroon, according to Kamal-Deen Ali, executive director of Accra-based Centre for Maritime Law and Security Africa and a former Ghanaian naval officer.

The number of violent attacks in the Gulf of Guinea has remained fairly consistent over the last decade, but abductions of more than 10 people have become increasingly commonplace, said Dirk Siebels, senior analyst at Denmark-based Risk Intelligence.

The pirates are increasingly operating deeper out to sea, with kidnappings on average taking place 60 nautical miles offshore in 2020, according to the IMB. The furthest out took place in mid-July, when eight machine-gun wielding pirates boarded a chemical tanker off Nigeria’s coast and kidnapped 13 crew members before fleeing. Only unqualified seamen remained on the Curacao Trader, which was left adrift 195 nautical miles from the coast. The crew were freed the following month.

“The perpetrators of such incidents are perfectly aware there is almost no risk of being caught,” Munro Anderson, a partner at London-based maritime security firm Dryad Global, said. “That is precisely the kind of incident an international naval coalition could mitigate.”