Having won at Paris St Germain in their opening Champions League game, Man United are now in a commanding position in their group and are beginning to look like a squad with real strength in depth

The striker, in the headlines recently due to his campaigning over free school lunches, showed he has not been distracted from his day job as he came off the bench with 27 minutes left and led United to an impressive victory.

Rashford is only the second United player to score a hat-trick as a substitute after his manager Ole Gunnar Solskjaer did so against Nottingham Forest in 1999.

“I think the manager wanted me to up the tempo. That for us means going forward. There was definitely spaces there. We looked dangerous throughout and that we could score every time we went forward,” Rashford said.

“It was a real team performance. The ones who started did well and the substitutes did well too.”

Having won at Paris St Germain in their opening game, United are now in a commanding position in the group and are beginning to look like a squad with real strength in depth.

Solskjaer opted to leave Bruno Fernandes alongside Rashford on the bench and handed starts to Paul Pogba and Donny van de Beek in midfield. 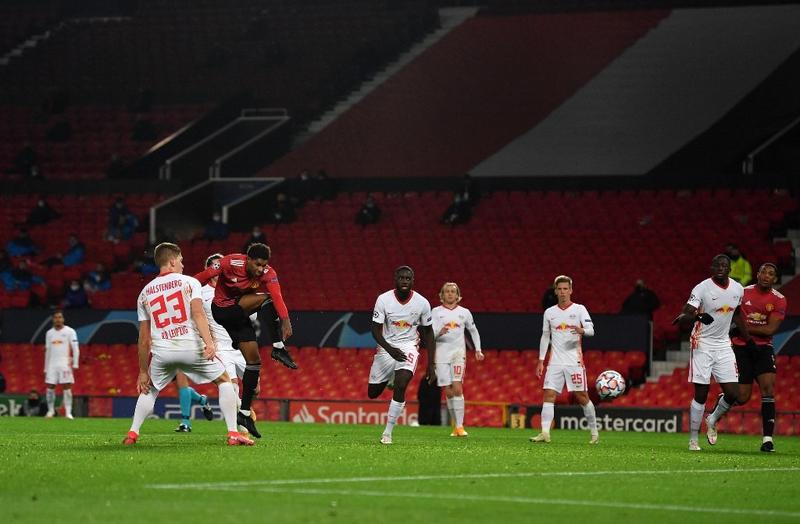 Mason Greenwood, also restored to the starting line-up, opened the scoring in the 21st minute, delivering a clinical finish after being slipped through by Pogba.

The VAR review suggested Greenwood may have been narrowly offside but the goal was allowed to stand.

Leipzig, who reached the semi-finals in last season’s competition, stuck in the game well and could have drawn level when Ibrahima Konate’s header was kept out by David De Gea.

Rashford came on for Greenwood in the 63rd minute and soon set about deciding the match.

The England striker raced on to a long ball from Fernandes to make it 2-0 in the 74th minute, with the initial offside call being overturned on review.

Rashford made it 3-0 after Fred robbed Marcel Sabitzer and Anthony Martial added the fourth from the penalty spot after he had been brought down by Sabitzer.

The hat-trick, inside 19 minutes, was completed in stoppage time when Rashford blasted home after good work from Martial cutting in from the left.