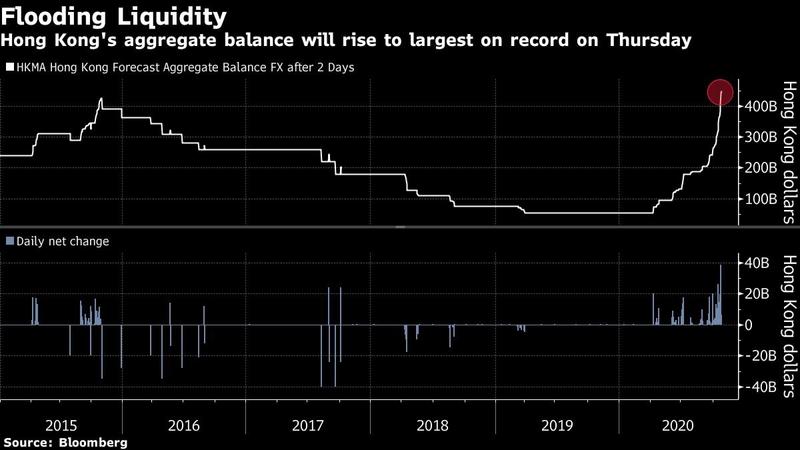 Investors keep piling into Hong Kong ahead of Ant Group Co’s mega listing, with demand for the local dollar prompting authorities to flood the banking system with unprecedented liquidity.

The Hong Kong Monetary Authority sold a record HK$31.8 billion (US$4.1 billion) worth of local dollars to curb the currency’s strength, lifting the interbank liquidity pool to almost HK$450 billion

The Hong Kong Monetary Authority (HKMA) on Tuesday sold a record HK$31.8 billion (US$4.1 billion) worth of local dollars to curb the currency’s strength. This will lift the interbank liquidity pool to almost HK$450 billion on Thursday, surpassing the previous high in 2015.

The HKMA has stepped in 83 times this year to prevent the local currency from strengthening past its permitted trading range with the US dollar. The pace of interventions has picked up recently, and October’s size will top HK$183 billion, the largest on record.

An elevated liquidity pool means interbank rates will likely remain steady despite massive demand for cash during large stock sales. Suppressed borrowing costs will also benefit local businesses struggling in the wake of last year’s anti-governement protests in the city and the impact of the coronavirus epidemic on the economy.

Ant’s initial public offering, month-end bank regulatory checks and demand for the Hong Kong government’s inflation-linked retail bonds -- or iBonds -- have helped increase demand for the local currency, said Carie Li, an economist at OCBC Wing Hang Bank. “This situation will likely ease up once Ant’s IPO finishes in early November,” she said. “By then, some capital may leave Hong Kong, allowing the Hong Kong dollar to move away from its strong end to trade at around 7.75-7.76 per dollar.”

However, the aggregate balance could still have room to rise further in coming months, given the local dollar’s interest rate premium over the greenback and with further listings by Chinese mainland firms in the pipeline, Li added.

The one-month Hong Kong dollar lending rate, known as Hibor, was at 0.41571 percent as of Tuesday, near a multiyear low. The Hong Kong dollar was little changed at 7.75 per US dollar as of 11:02 am Wednesday.