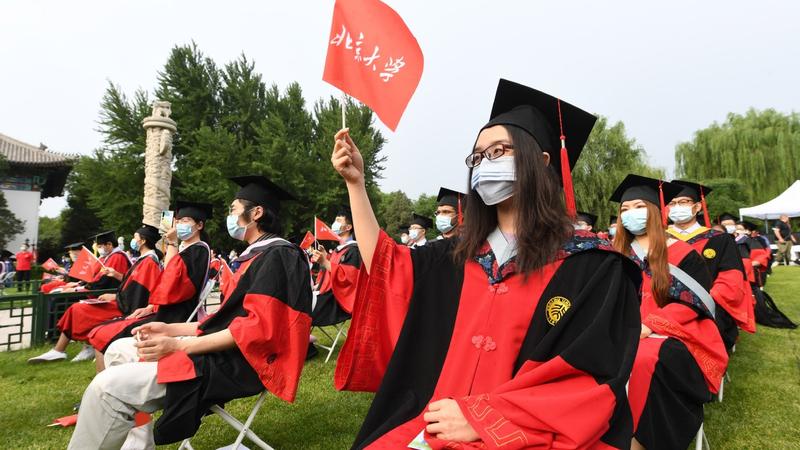 Fewer graduates from China's top two universities－Tsinghua University and Peking University－have chosen to continue their education abroad in recent years, according to data from the two institutions.

It added that the figure has continued to fall this year, without providing details.

Tsinghua University said 15.3 percent of last year's graduates went abroad to study, down 1.2 percentage points from 2018, while data from Peking University showed that 14.8 percent of graduates from the university chose to study abroad after their graduation, down from 15.2 percent in 2018

Meanwhile, it said that 29 percent of last year's graduates have chosen to continue their studies at domestic universities and research institutes, compared with 28.5 percent in 2018 and 2017.

Graduates who have chosen to work after graduation preferred Chinese State-owned enterprises and private firms rather than foreign companies, said the university.

Last year, 33.4 percent of Tsinghua graduates who joined the workforce opted for Chinese private enterprises, 31.3 percent went to SOEs and only 5.2 percent chose foreign companies, a situation which has remained relatively unchanged for the past five years.

The university said more graduates preferred SOEs and Chinese private enterprises rather than foreign ones because domestic companies have enjoyed rapid development and have a greater demand for talents.

Data from Peking University showed a similar trend, with fewer graduates choosing to continue their studies abroad. Last year, 14.8 percent of graduates from the university chose to study abroad after their graduation, down from 15.2 percent in 2018 and 15.6 percent in 2017.

Among Peking University graduates who opted to work after their graduation, although fewer chose employment at SOEs over the past three years, this remained the most preferred option for graduates. About 27.1 percent of its graduates last year who had signed employment agreements chose to work at SOEs, down from 28.8 percent in 2018 and 30.4 percent in 2017.

In contrast, 10.7 percent of its graduates last year who joined the workforce chose employment at Sino-foreign joint ventures or foreign enterprises, compared with 13.8 percent in 2018 and 8.8 percent in 2017.

Chen Zhiwen, editor-in-chief of online education portal EOL, said the trend for Chinese students to prefer domestic universities and enterprises over foreign ones is inevitable as the country has enjoyed great development in recent years.

Fewer graduates from top Chinese universities will choose to study abroad as the nation's higher education sector gets stronger and students do not need to go abroad to enjoy a better education, he said.

In the 1980s and 1990s, only the best students could go abroad to study, usually with the help of scholarships from foreign universities, but studying abroad has now become a common practice among middle-income families in China, he said.

Unlike their predecessors, who could enjoy great career prospects, students who study abroad nowadays do not enjoy many more advantages in the employment market than their domestic counterparts, he said.

Similarly, while in the past, people could make much more money from working at foreign enterprises than domestic ones, domestic enterprises such as Huawei, Tencent and Alibaba now offer higher salaries to graduates than their foreign counterparts, he added.

Liu Xuanbo, a PhD candidate at Tsinghua University, said he chose to study in China because he preferred his research to be consistent.

"I enjoyed a good relationship with my supervisor, and I also got my master's degree at Tsinghua, so I think it is good for me to continue my research here and such consistency is good for my future development."

He said he plans to live and work in China, so it's better to get familiarized with the academic environment.

"What's more, now we have many exchange programs to support me if I want overseas experience, and it should not be a big obstacle."

Lu Minjiang contributed to this story.