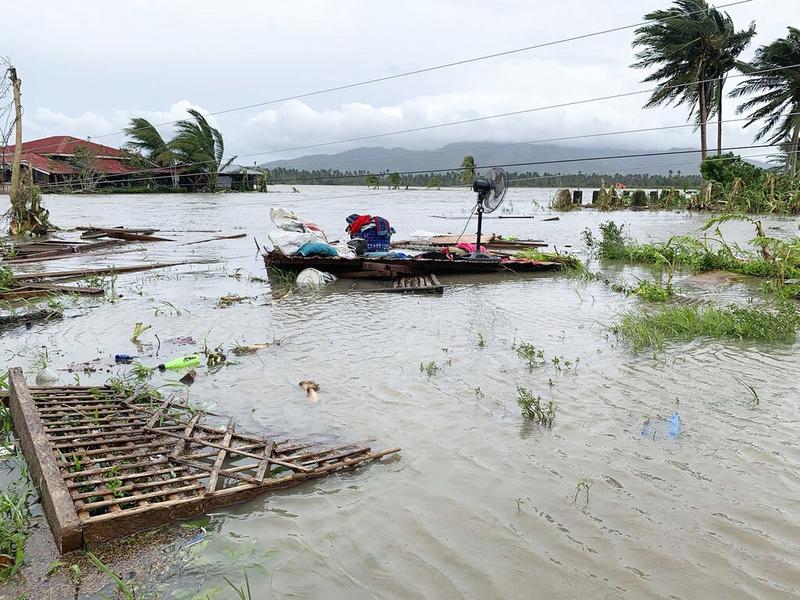 The remains of a house are surrounded by floods in Pola town on the island of Mindoro, central Philippines, Oct 26, 2020. (ERIK DE CASTRO/AP)

MANILA - Thirteen people are missing as Typhoon Molave battered the Philippines, triggering flooding, tearing off roofs, and knocking down trees, a disaster agency said on Monday.

Nearly 25,000 people in the Bicol region were evacuated amid threats of landslides and flash floods, authorities said. Classes were suspended the capital region and in several provinces

The Philippine Coast Guard (PCG) reported that one person is also missing after a yacht sank off Bauan town in Batangas province, south of Manila. The seven other crew members of the yacht were rescued, the PCG said.

Typhoon Molave made its first landfall in Tabaco City in the Bicol region, south of Manila, early on Sunday evening.

There were no immediate reports of deaths from the typhoon.

Nearly 25,000 people in the Bicol region were evacuated amid threats of landslides and flash floods, authorities said. Classes were suspended the capital region and in several provinces.

The state weather bureau warned that the typhoon will dump more rain in many provinces and regions, including in the capital Manila.

Molave is the 17th typhoon or tropical storms to batter the Philippines this year amid the COVID-19 pandemic.

About 20 typhoons pass through the disaster-prone Philippines a year, mostly in the second half. The government in May said storms are likely to complicate the nation’s fight against the coronavirus as it will have to evacuates tens of thousands of people from typhoon-hit areas.