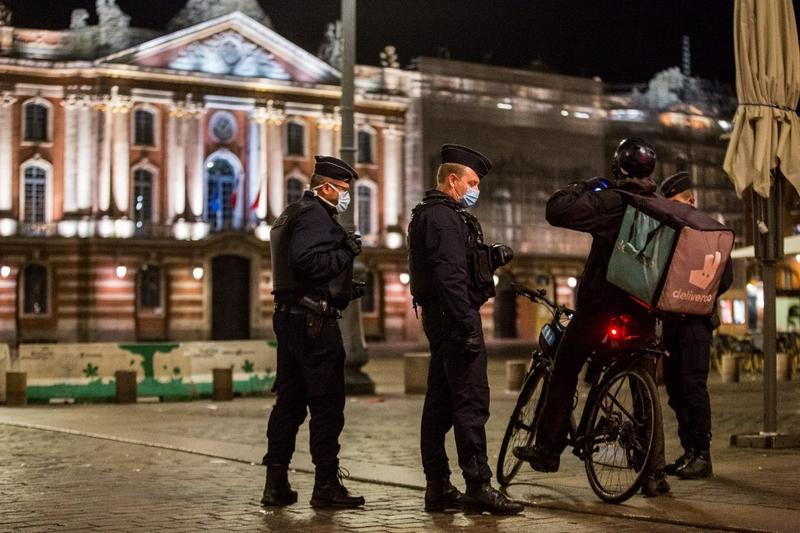 Members of the French National police, CRS, control a delivery man, as they patrol on the place du Capitole, in Toulouse southwestern France, on Oct 24, 2020. (FRED SCHEIBER / AFP)

Croatia has reported record-breaking new COVID-19 cases in five consecutive days as of Sunday, with 2,421 cases reported in the past 24 hours

The new cases took the total to 1,138,507, with France now ahead of Argentina and Spain to register the world’s fifth highest number of cases after the United States, India, Brazil and Russia.

In the past three days, France has registered over 139,000 new cases, which is more than the 132,000 cases registered during the two-month lockdown from mid-March to mid-May.

The health ministry said that 116 people had died from coronavirus infection over the past 24 hours, compared to from 137 on Saturday, taking the total to 34,761.

The number of people who tested positive during massive testing under way in the whole country increased to 17 percent, from 16 percent on Saturday and around 7 percent a month ago.

Like many other European countries, including neighbours Britain, Spain and Italy, France has seen a second wave hit in recent weeks.

The head of the Paris region health authority, Aurelien Rousseau, said on BFM television that the circulation of the virus in the region was accelerating and that the situation in French hospitals was becoming more and more tense.

“This is a dangerous moment for many countries in the northern hemisphere as cases spike,” Tedros said in an online meeting of the Berlin-based World Health Summit. “We still have a long haul ahead of us.”

He urged that vaccines, once available, be spread among “some people in all countries rather than all people in some countries.”

The number of confirmed cases in the African continent has reached 1,707,741, the Africa Centers for Disease Control and Prevention (Africa CDC) said on Sunday.

The Africa CDC said in a statement that the death toll related to the pandemic stood at 41,145 as of Sunday afternoon.

A total of 1,399,238 people infected with COVID-19 have recovered across the continent, the Africa CDC said.

The most affected African countries in terms of the number of positive cases include South Africa, Egypt, Morocco, Ethiopia and Nigeria.

The Southern Africa region is the most COVID-19 affected region both in terms of the number of confirmed positive cases as well as the number of deaths.

Argentina on Sunday reported another 284 deaths from COVID-19, pushing the national count to near 29,000, according to the Ministry of Health.

The central province of Buenos Aires, the largest in the Latin American country, continues to be the most affected with 527,320 cases, accounting for 48.35 percent of the national total.

Argentine President Alberto Fernandez, in a virtual meeting organized by a bank, Banco Credicoop, said that the arrival of a vaccine against COVID-19 will help stop the spread of a second wave of the coronavirus in the country.

"I have the impression that Argentina is at a point where we can see an exit on the horizon. The vaccine is close, and with the vaccine, we will be able to avoid what Europe is experiencing -- a second wave of the coronavirus," the president said.

Argentina launched a lockdown on March 20 to contain the spread of the disease and has extended it until Nov 8.

According to the country's Ministry of Health, 13,493 new infections have been registered since Saturday, bringing the total caseload to 5,394,128. 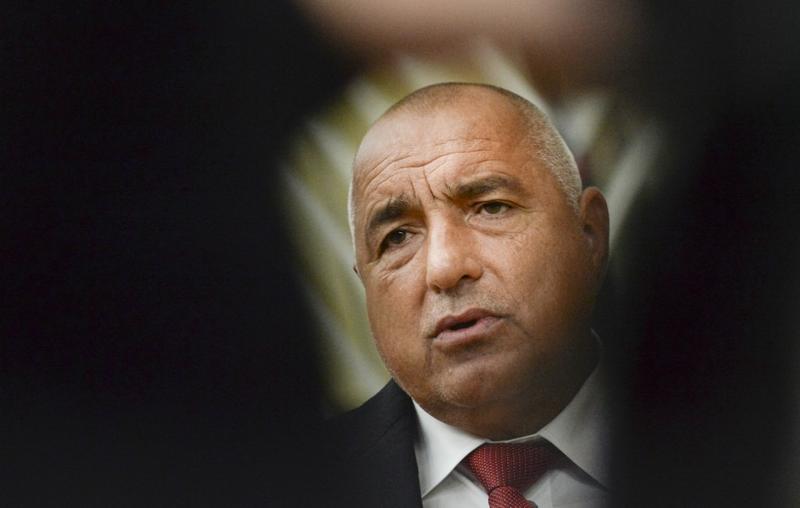 Bulgarian Prime Minister Boyko Borissov said on Sunday he had a “general malaise” after testing positive for coronavirus and would stay at home for now for any treatment, as recommended by his doctors.

Borissov, who on Friday met Keith Krach, US undersecretary of state for economic affairs, has informed the US Embassy in Sofia of the situation, the head of Sofia health inspectorate said.

The government press office said Borissov was able to carry out his duties and was in constant contact with his ministers as the Balkan country grapples with a spike in new coronavirus infections and daily anti-government protests since July.

Borissov had self-isolated late on Friday after he was informed that a deputy minister who he had been in contact with five days ago had tested positive.

Health authorities lifted Borissov’s quarantine late on Saturday after two negative results from coronavirus tests, but then he tested positive on Sunday.

Bulgaria, like many other European Union countries, is seeing a steep rise in new infections. There were 1,043 new cases reported on Sunday in the country of 7 million people, bringing the total to 37,562, including 1,084 deaths.

Cases of the novel coronavirus (COVID-19) infection in Chile declined 12 percent in the past two weeks, with the total caseload since the start of the outbreak here reaching 502,063, the Ministry of Health said on Sunday.

Cases have decreased in 12 regions, but are on the rise in others, including La Araucania, Los Rios, Nuble and Tarapaca.

In the past 24 hours, tests detected 1,540 new cases of infection, for a positivity rate of 4.3 percent.

Regarding the death toll, 52 more patients died in the past 24 hours, raising the total number of COVID-19 fatalities to 13,944.

Some 478,252 people have recovered from the disease nationwide. 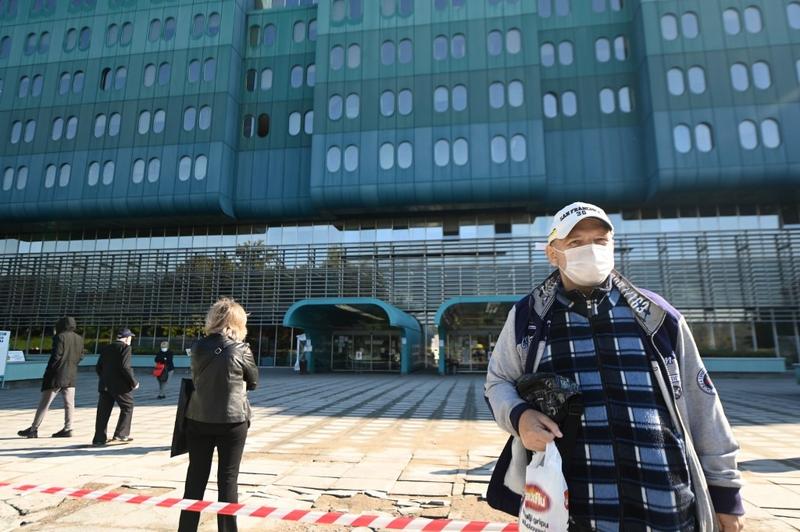 A man wearing a face mask stands with others as they wait to be admitted to the Dubrava Clinical Hospital in Zagreb on Oct 19, 2020, amid the COVID-19 pandemic. (DENIS LOVROVIC / AFP)

Croatia has reported record-breaking new COVID-19 cases in five consecutive days as of Sunday, with 2,421 cases reported in the past 24 hours.

To contain the spread of the coronavirus, Croatia's National Civil Protection Headquarters announced on Sunday new measures that will take effect midnight Monday.

The measures include mandatory physical distancing, a ban on all public events with more than 50 people, the new limit of the number of people attending weddings and funerals and the provision that public events and gatherings can last up to 10 pm while weddings until midnight.

Mayor of Ecuador's capital Quito, Jorge Yunda, said Sunday that he will quarantine himself "as the regulation requires" after testing positive for COVID-19.

"The activities we carry out expose us more to the virus, and although we take every measure, I want to inform you that I tested positive in my last test," Yunda tweeted.

He urged the public to continue to protect themselves against the virus.

The mayor, who is a doctor by training, has in recent weeks inaugurated public works in different neighborhoods of Quito, Ecuador's most populous city and the national epicenter of the pandemic.

According to the Ministry of Public Health, the exponential growth in COVID-19 infections continued with 1,609 cases reported in the last 24 hours, bringing the citywide tally to 50,694. 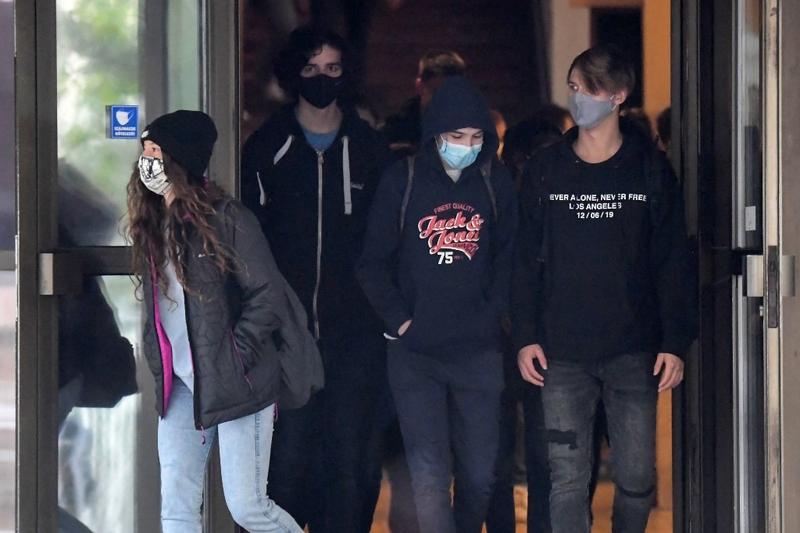 Hungary registered 3,149 new COVID-19 cases on Sunday, a new daily record since the outbreak of the epidemic in the country, according to the government's coronavirus information website.

Figures from the website showed that the total number of confirmed cases since the COVID-19 outbreak in Hungary stood at 59,247, with 16,242 recoveries and 1,425 fatalities. Currently, 2,449 COVID-19 patients are being treated in hospital, including 221 on ventilators.

The website called on Hungarians to brace themselves for further increase, as infections are increasing across Europe.

The National Center for Disease Control of Libya on Sunday reported 1,639 new COVID-19 cases over the past 24 hours, the highest daily increase recorded in the country so far.

The center said that 766 more recoveries and 5 more death were reported.

Lithuanian Health Ministry announced on Sunday afternoon that the total COVID-19 cases in the country have hit 10,184, an increase of 603 compared with the figure reported on Saturday.

The ministry's data showed that 4,073 people have recovered from the coronavirus-caused disease, which has claimed 134 lives.

So far, a total of 951,701 tests have been carried out in the country, according to the ministry.

Russia registered 17,347 COVID-19 cases over the past 24 hours, a new all-time high, as infections have been resurging, the country's COVID-19 response center said Monday.

Along with many other European countries, Russia has been witnessing a steep growth in COVID-19 cases over the past weeks after many restrictions were lifted and people gathered in large groups. 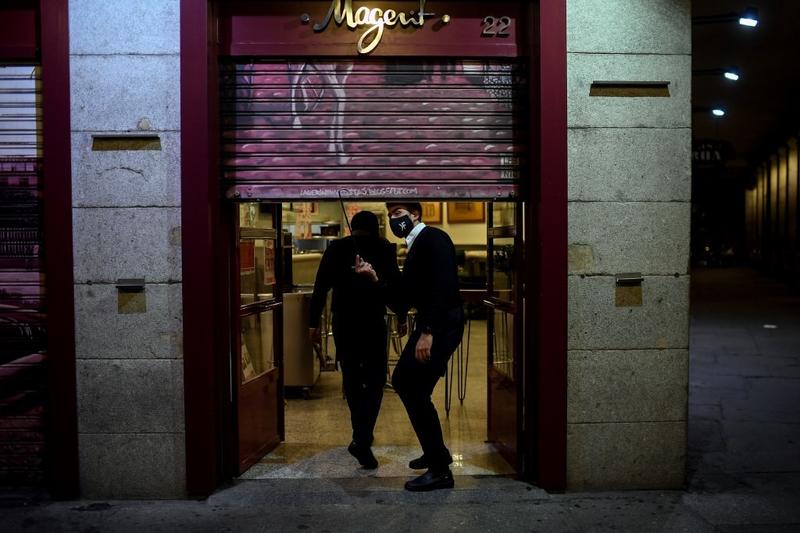 Spanish Prime Minister Pedro Sanchez announced a new state of emergency on Sunday in an effort to curb soaring coronavirus infections, imposing local nighttime curfews and banning travel between regions in some cases.

The measures go into force from Sunday night and will require all regions except the Canary Islands to impose a nighttime curfew and limit the number of people allowed to meet to six.

Catalonia was one of the first regions on Sunday to use the new legislation to impose a curfew, which will take effect at 10 p.m. Establishments open to the public will have to close at 9 pm.

Police were patrolling the city before the curfew took effect and locals welcomed the new rule.

Other regions that announced curfews from Sunday night included Cantabria and La Rioja.

Spain imposed one of the toughest lockdowns early on in the pandemic and then relaxed curbs over the summer.

But like many other European countries it has seen a second wave hit in recent weeks, and now has one of the highest numbers of infections in Western Europe. Total cases rose to 1,046,132 on Friday, while the death toll is nearing 35,000.

The state of emergency will need parliamentary approval to last beyond 15 days. Sanchez asked for parliament to approve its extension up to May 9.

Another 19,790 people in Britain have tested positive for COVID-19, bringing the total number of coronavirus cases in the country to 873,800, according to official figures released Sunday.

The coronavirus-related deaths in Britain rose by 151 to 44,896, the data showed.

The latest figures came as doctors in Britain raised grave concerns about the pandemic situation in the autumn and winter period.

A research from the British Medical Association (BMA) showed more than half of healthcare staff in the country saying they are "quite anxious" about what is to come.

More than a third of doctors believe the British government's three-tier alert system will have no impact on efforts to contain the spread of COVID-19, Sky News reported. More than 6,000 doctors took part in the survey.

The United States has seen its highest ever number of new COVID-19 cases in the past two days, keeping the pandemic a top election issue as Vice President Mike Pence travels the country to campaign despite close aides testing positive.

The United States reported 79,852 new infections on Saturday, close to the previous day's record of 84,244 new cases. Hospitalizations are also rising and have hit a two-month high and deaths are trending upwards, according to a Reuters tally.

So far in October, 29 states have set records for increases in new cases, including five considered key in the Nov 3 presidential election: Ohio, Michigan, North Carolina, Pennsylvania and Wisconsin.

Cases in the Midwest set a new record on Saturday and the number of hospitalized COVID-19 patients in that region hit an all-time high for the ninth day in a row.

Hospitals are strained in several states including North Dakota, which is the hardest hit based on recent new cases per capita, according to a Reuters analysis.

Pence’s chief of staff, Marc Short, tested positive on Saturday as well as multiple other senior aides. Despite the outbreak, the White House said the vice president would press ahead with campaigning, visiting North Carolina on Sunday and Minnesota on Monday.

President Nicolas Maduro said Venezuelan scientists have isolated a molecule that inhibits the COVID-19 virus and will ask the World Health Organization to evaluate its possible use on a global scale.

The active ingredient is a derivative of ursolic acid from a plant and non-toxic to humans, Maduro said in an appearance on state television Sunday. Six months of research at the government-backed IVIC scientific institute led to the discovery, he said.

“The molecule will be mass-produced and delivered worldwide for the cure of COVID-19,” according to Maduro.

Ursolic acid is sold in the US as a dietary supplement with reputed anti-inflammatory properties.