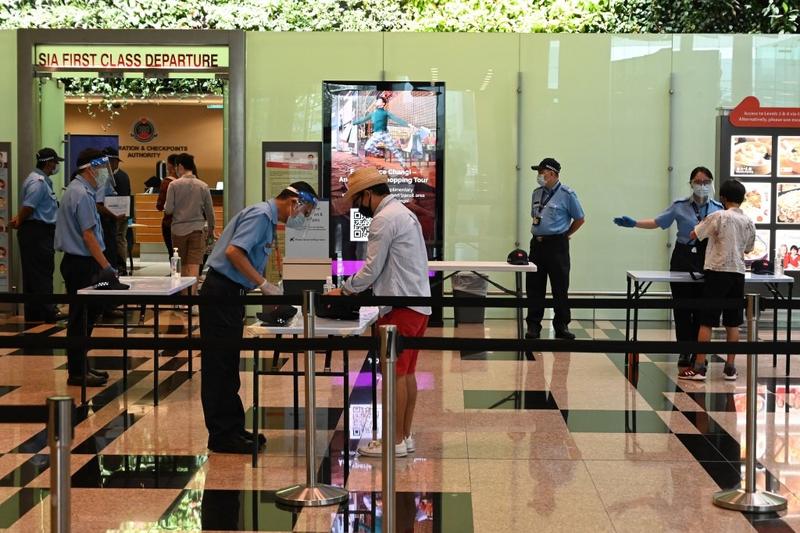 Diners go through security check to board the Singapore Airlines Airbus A380 plane at Changi International Airport in Singapore on Oct 24, 2020. (PHOTO / AFP)

SEOUL / JERUSALEM / DAMASCUS / AMMAN - Singapore is seeking to reduce the amount of time it takes to regularly check migrant workers for coronavirus infection by piloting the use of antigen rapid tests.

For a period of four weeks, a group of 1,000 migrant workers will undergo antigen rapid testing every seven days, the Ministry of Manpower said in a statement Sunday. That’s in addition to the polymerase chain reaction test that they receive every 2 weeks. The new method potentially allows infected workers to be isolated more quickly, reducing the risk of the virus spreading to other residents in dormitories.

Singapore is distributing contact-trace tokens and bolstering the testing of workers after infections in dormitories exacerbated the outbreak earlier this year. Airports are also studying rapid antigen checks, which look for the presence of the virus’s proteins, making them quicker and cheaper but less accurate than established methods that detect its nucleic acids. The better-known polymerase chain reaction tests have been regarded as the gold standard for Covid testing.

Polymerase chain reaction tests, however, take a day to confirm results, while antigen rapid tests indicate if a person is positive within half an hour, the ministry said. It will evaluate the effectiveness of the trial and assess the suitability of including it into regular routine testing for workers. 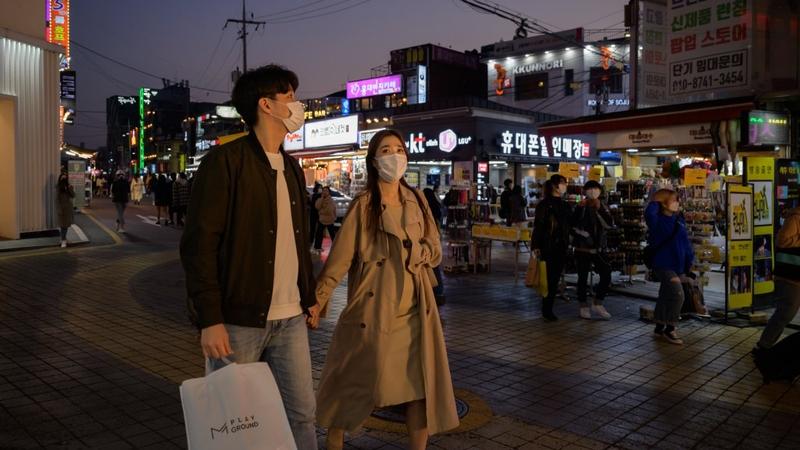 In a photo taken on Oct 18, 2020 people wearing face masks walk on a street in the Hongdae district of Seoul. (PHOTO / AFP)

The number of South Koreans who have died after getting flu shots has risen to 48, the Korea Disease Control and Prevention Agency (KDCA) said on Saturday, adding that the vaccines would continue to reduce the chance of having simultaneous epidemics.

The health authorities said they found no direct link between the deaths and the shots. They plan to carry on with the state-run vaccination programme to try to avoid having to fight both the flu and the coronavirus over the coming winter.

“After reviewing death cases so far, it is not the time to suspend a flu vaccination programme since vaccination is very crucial this year, considering ... the COVID-19 outbreaks,” KDCA Director Jeong Eun-kyung told a briefing.

Jeong said the review had shown no direct link between the flu shots and the 26 deaths that have been investigated.

Some 20 initial autopsy results from the police and the National Forensic Service showed that 13 people died of cardiovascular, cerebrovascular and other disorders not caused by the vaccination.

The death toll among those who have been vaccinated rose by 12 cases from a day earlier to 48 on Saturday.

The rising deaths have caused some doctors and politicians to call for a halt to the government campaign to vaccinate about 30 million of the country’s 54 million people.

While encouraging people to get flu vaccines, Jeong issued precautions to take before getting the shot, such as drinking enough water and telling healthcare workers about any underlying medical conditions. She also advised people to wait 15-30 minutes before leaving the clinic where they receive their vaccine.

Ekrem Imamoglu, mayor of Turkey's largest city Istanbul, said on Saturday that he was hospitalized after testing positive for COVID-19.

"Today, I tested positive for COVID-19. I am feeling well and will be recovering in the hospital," Imamoglu tweeted.

In a video posted on his social media accounts, the mayor said he came to hospital on Friday evening with a 38-degree fever and spent the night there.

"There is nothing that can be viewed as negative in a medical sense," he remarked.

Istanbul's American Hospital said at a press release that the mayor was admitted to the hospital with symptoms of upper respiratory tract infection and tested positive for the coronavirus.

Turkish Health Minister Fahrettin Koca earlier announced that Istanbul, with a population of over 16 million, has accounted for 40 percent of the total COVID-19 cases in the country.

Israel's health ministry reported on Friday 573 new COVID-19 cases, bringing the total in the country to 309,413.

The death toll reached 2,372, with 43 new fatalities. The number of patients in serious condition decreased from 573 to 548, out of 969 patients currently hospitalized, according to the ministry.

A month-long nationwide lockdown in Israel was lifted on Oct. 18 but many restrictions have remained in place, including a ban on large gatherings.

Meanwhile, schools and many businesses including restaurants, bars, shops, gyms, cinemas, barbershops, and other "non-vital" working places are still closed.

Israeli Prime Minister Benjamin Netanyahu said on Saturday that Israel's special cabinet for handling the COVID-19 is set to convene on Sunday to discuss allowing shops and more schools to reopen.

According to Israeli media, the special cabinet will also discuss shortening the country's lockdown exit strategy from nine to five or six steps.

The World Health Organization (WHO) on Saturday donated 8.8 tons of protective and medical supplies to Syria to fight against the COVID-19 pandemic, state news agency SANA reported.

The shipment, delivered to the country through the Damascus International Airport, included personal protection gear for health workers as well as medications and other medical equipment, said the report.

He said the WHO provided laboratory aids for disease diagnosis and training courses for health workers in addition to working on providing them with personal protection needs and drawing plans to implement what the science has reached to deal with the pandemic.

For his side, Syrian Health Minister Assistant Ahmad Khleifawi stressed the importance of the visit of the WHO delegation as it is the first for the organization's regional director to Syria after the outbreak of the pandemic.

Minister of State for Media Affairs Ali Al-Ayed said the government had endorsed the necessary health protocol prepared by the committee of organizing border crossings.

The decision seeks to "strike a balance" between bringing home stranded Jordanians and controlling the rate of imported COVID cases, said Al-Ayed, who is also the government spokesperson, according to the state-run Petra news agency.

The border crossings to receive passengers during this phase will be limited to the al-Mudawara crossing, the King Hussein Bridge, and the Sheikh Hussein Bridge, according to procedures that take into consideration the number of passengers at each of the crossings, the minister added.

The tally of COVID-19 cases in Jordan exceeded 50,000 on Saturday after 1,820 new infections were recorded.

The total COVID-19 cases in the kingdom rose to 50,750, while the fatalities from the virus climbed by 32 to 540, the Jordanian Health Ministry said in a statement.

Taking a swipe at arch-foe the United States, Khamenei said Iran must enforce curbs better and end disputes between institutions over the pandemic.

The ministry also reported 55 new deaths and 3,021 more recovered cases in the country, raising the death toll from the infectious virus to 10,568 and the total recoveries to 378,209.

The World Health Organization (WHO) said on Saturday that it will provide 2 million US dollars in aid for Iraq to cope with the COVID-19 pandemic, as the Iraqi Health Ministry reported 3,204 new cases in the country.

Wael Hatahit, head of the WHO's emergency team in Iraq, said in a press release that WHO will provide medical assistance for Iraq during the last months of this year to support the country's health sector in confronting the coronavirus pandemic.

In the upcoming two months, the organization will focus on preparing a large shipment of protective equipment including diagnostic devices for medical workers in order to maintain their safety, Hatahit added.

Kuwait reported 695 new COVID-19 cases and four more deaths, raising the tally of infections to 120,927 and the death toll to 744 in the country.

The Kuwaiti health ministry also announced the recovery of 670 more patients, taking the total recoveries in the country to 112,110.

The Qatari health ministry announced 254 new COVID-19 infections, raising the total number of confirmed cases in the Gulf state to 130,965.

It said 269 more recovered from the virus, bringing the overall recoveries to 127,868, while the fatalities remained 229 for the second consecutive day as no new deaths were reported.

Palestine reported 410 new coronavirus cases, taking the tally of infections in the Palestinian territories to 61,593, including 54,307 recoveries and 514 deaths.

The death toll surged to 118,534, with 578 deaths recorded since Saturday morning.

For nearly a month the COVID-19 cases have been witnessing a downward trend, as this is the third consecutive day when the number of active cases has been below the 700,000-mark in the country.

On Saturday the total number of people cured crossed the 7-million mark.

Indian government's focus has been on ramping up COVID-19 testing facilities across the length and breadth of the country.

Victoria state, Australia’s COVID-19 epicentre, on Sunday delayed an expected announcement on the easing of lockdown restrictions due to an outbreak in Melbourne, prompting warnings that residents were at a “financial and mental breaking point”.

The restrictions have limited most retail businesses in the state’s capital to providing online services only since early August, and 5 million people living under stay-at-home orders were expecting an announcement on Sunday.

Andrews said he decided to wait until test results showed whether all infections in the latest outbreak were linked.

Mongolia reported one COVID-19 case, bringing the national tally to 338, said the health ministry in a statement on Sunday.

"A total of 673 tests for COVID-19 were conducted across Mongolia yesterday and one of them was positive. The latest case is a transport driver who has entered Mongolia via Altanbulag border point," said the statement.