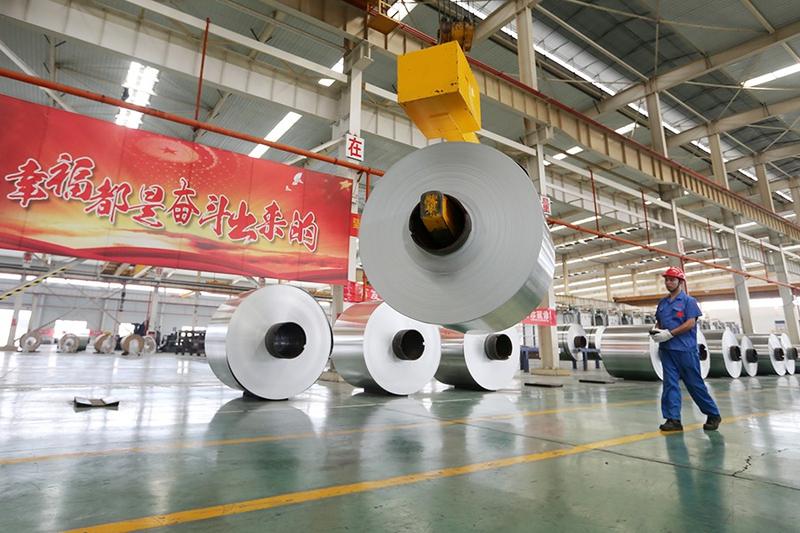 In this undated file photo, an employee oversees movement of aluminum rolls at a plant in Huaibei, Anhui province. (PHOTO / XINHUA)

Amid the rising tide of protectionism and unilateralism, China can promote awareness among other countries of the benefits of globalization, as long as it maintains relatively fast growth and keeps opening up the economy.

Lin Yifu, counselor of the State Council and honorary dean of the National School of Development at Peking University

During the process of pushing forward domestic circulation, the world's second-largest economy can further improve the level of opening-up of its science and technology, financial and industrial sectors, said Qiu Baoxing, counselor of the State Council and former vice-minister of housing and urban-rural development.

"Domestic and international circulation is mutually reinforcing each other," he said. "By promoting domestic circulation, we will keep the opening-up of China's primary, secondary and tertiary sectors at the same level, maintain the equilibrium of opening-up in coastal and inland regions by allowing a freer flow of the factors of production, and use the impact and good business environment of cities to propel the opening-up of rural areas."

Facing a global slowdown in economic growth, the biggest contribution that China can make to the world is to maintain a stable and faster growth than other countries, said Lin Yifu, another counselor of the State Council and honorary dean of the National School of Development at Peking University.

Global economic growth is slowing down and so will China's growth. But compared with other countries, China is still the one that maintains fastest growth in the world, said Lin. In his opinion, China will maintain its annual rate of contribution to global economic growth at around 30 percent or even higher.

"Promoting domestic and international circulation means providing a larger market to the other countries amid China's market expansion ...During the process of development, China needs natural resources and technologies abroad. This will become an important growth driver for other countries," he said.

"Amid the rising tide of protectionism and unilateralism, China can promote awareness among other countries of the benefits of globalization, as long as it maintains relatively fast growth and keeps opening up the economy."

Due to the growth in income, China saw an increased contribution of the services sector to its GDP. As a result, the contribution of China's exports to GDP dropped from 35.4 percent in 2006 to 17.4 percent in 2019, and the number will keep falling gradually. Although there are short-term reasons behind the new development pattern of "dual circulation" advocated by China's top leadership, a more important reason actually lies in the trend of Chinese economic development, Lin said.

To realize domestic circulation, the fundamental measure is to continuously deepen reforms so that consumption will become the most important driver of China's economic growth, said Yao Jingyuan, a research fellow of the Counselor's Office of the State Council.

Yao said he hopes that the final consumption expenditure will contribute to more than 70 percent of China's GDP growth by 2035, rising from 57.8 percent last year.

"The key to increase consumption is to improve residents' income by making the pie bigger through our pursuit of innovation-driven high-quality development. As we cannot increase the size of the pie in a day, China should increase the proportion of urban and rural residents' income to the primary distribution of income," he said.

In addition, he advised the government to further increase the efficiency of market-based resource allocation and deepen reforms that will improve the overall quality of economic growth.