By Willa Wu in Hong Kong 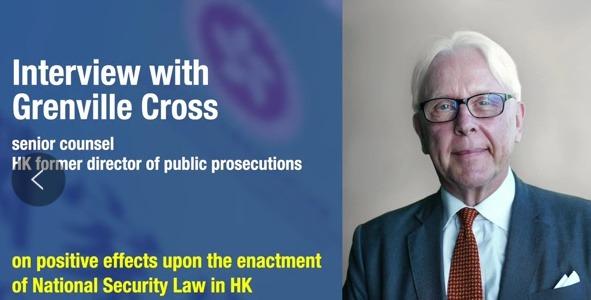 The National Security Law for Hong Kong has brought “immediate positive changes” to the city’s political and economic landscape, as well as its people’s daily lives, says Grenville Cross, a prominent barrister and former director of public prosecutions in the Hong Kong Special Administrative Region.

In a face-to-face interview with China Daily, he said the immediate political changes could be seen from the fact that those who had been behind last year’s anti-government protests have since scaled back their activities, while several local subversive organizations have been disbanded.

Enacted on June 30 in time for the 23rd anniversary of the establishment of the HKSAR, the National Security Law for Hong Kong outlaws acts of secession, subversion, terrorism and conspiracy with external forces to endanger national security. The police said that as of Sept 27, a total of 28 people had been arrested under the law.

Grenville Cross said the immediate political changes could be seen from the fact that those who had been behind last year’s anti-government protests have since scaled back their activities, while several local subversive organizations have been disbanded

Shortly before the law’s promulgation, several radical political groups, including Demosisto, Hong Kong National Front and Studentlocalism, which had all advocated Hong Kong independence, broke up, and unruly, violent protests have since diminished.

With the violence and demonstrations having subsided, changes created by the law can also be seen in police operations, said Cross, who was appointed the SAR’s director of public prosecutions in October 1997 and served for more than 12 years until October 2009.

He referred to the standing down of riot officers about two weeks after the legislation came into force. About 4,000 officers, or two-thirds of the anti-riot unit, were reportedly redeployed to their original duties, which included street patrol and maintaining law and order in general.

“At the height of the protests, many police officers had to be relocated and redirected from their normal duties in order to deal with the unrest. As I say, that caused a surge in general criminal offenses, making Hong Kong a far less safe place to live in,” Cross said.

Hong Kong saw an overall 9.2 percent annual increase in crime at the end of last year after recording a downward trend in overall crime for 12 successive years.

“Now that the police are returning to their normal duties, Hong Kong will again be one of Asia’s safest cities. And this is directly related to the National Security Law,” he said. 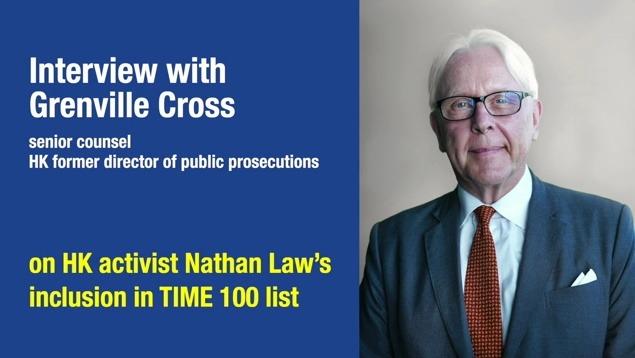 The veteran barrister noted the law is also welcomed by local business chambers, banks and major hotel groups because it shows that peace is returning to the streets and business can function again.

“All these are good not only for the people, but also for those who want to do business in Hong Kong,” said Cross.

Hong Kong’s National Security Law made world headlines when it was enacted.

Some Western governments and politicians have been ramping up pressure on the SAR and Beijing, citing “loss of confidence” and “fear” of the law.

Cross noted that the National Security Law is also welcomed by local business chambers, banks and major hotel groups because it shows that peace is returning to the streets and business can function again

Britain, Canada and Australia suspended extradition agreements with Hong Kong and warned their citizens against coming to the city. The US government even slapped economic sanctions on 11 incumbent or former officials of the central government and the HKSAR it deemed responsible for the law’s enactment.

“It’s all orchestrated by the US State Department, particularly (Secretary of State) Mike Pompeo. They know that Hong Kong is important to China in various ways as a banking and legal center. And if they can harm Hong Kong, they think this will somehow undermine China too. That’s why they want to inflict maximum harm. But, I don’t believe they’ll succeed,” Cross said.

In his view, Hong Kong fugitive Nathan Law Kwun-chung is no more than a “useful idiot” — a saying in England that refers to people who can be easily manipulated in order to further the political agenda of certain powers and agencies.

Law, 27, is a co-founder of the disbanded Hong Kong localist group Demosisto.

State broadcaster CCTV reported in August that Law, along with five other radicals, is wanted by Hong Kong police on suspicion of violating the city’s National Security Law. He fled for the United Kingdom in June and has since been actively working with foreign politicians in an “international alliance” against China.

Law was recently named by Time magazine as one of the “100 most influential people” of the year.

Cross noted that the list is based on that magazine’s readership and people can be included for either good or bad things they’ve done. “Some people just overlook that,” he pointed out.

He said Law has been working for some time to advance US interests and undermine the interests of China. The fugitive was among the group of people who asked the US in September last year to pass the “Hong Kong Human Rights and Democracy Act” which commits the US to supporting the protests in Hong Kong and calls for sanctions and other diplomatic actions if Hong Kong is pronounced “insufficiently autonomous”.

“He spent a lot of time running down China and Hong Kong in the UK and the US. He has made a lot of people in various parts of the world worry about Hong Kong and China. And to that extent, he has been influential.

“But it’s certainly not an honorable thing for him to have done so much damage to his own country and his home city. And it’s not the sort of thing I think any decent young person in Hong Kong would want to emulate,” said Cross.