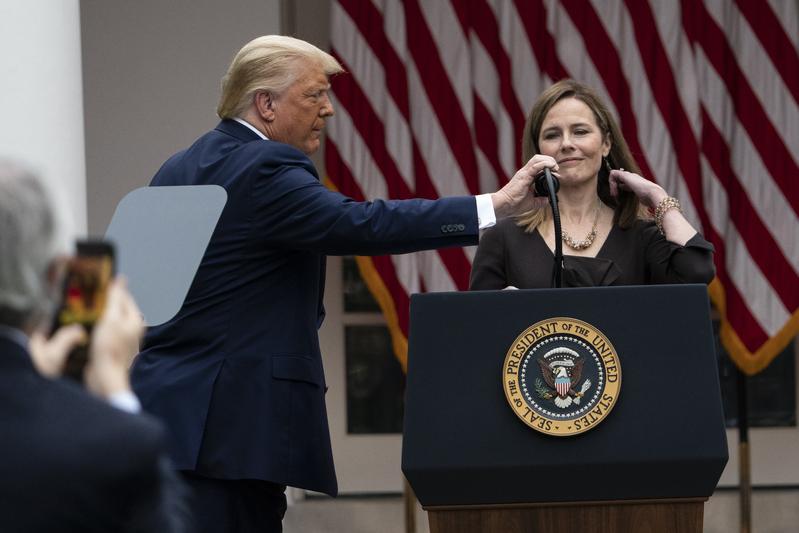 President Donald Trump adjusts the microphone after he announced Judge Amy Coney Barrett as his nominee to the Supreme Court, in the Rose Garden at the White House, Saturday, Sept. 26, 2020, in Washington. (ALEX BRANDON / AP)

WASHINGTON - US President Donald Trump announced on Saturday that he is nominating Amy Coney Barrett, a conservative federal appellate judge, for the Supreme Court.

"She is a woman of unparalleled achievement, towering intellect, sterling credentials, and unyielding loyalty to the Constitution," Trump said of Barrett from the White House Rose Garden.

"This should be a straightforward and prompt confirmation," he said, while calling for a "respectful and dignified" process for the Supreme Court nominee.

Barrett, who sits on the bench of Chicago-based US Court of Appeals for the 7th Circuit, said that she has "no illusions that the road ahead of me will be easy, either for the short term or the long haul."

Barrett, who sits on the bench of Chicago-based US Court of Appeals for the 7th Circuit, said that she has "no illusions that the road ahead of me will be easy, either for the short term or the long haul"

"I assure you that I will meet the challenge with both humility and courage," she continued. "If confirmed, I would not assume that role for the sake of those in my own circle, and certainly not for my own sake, I would assume this role to serve you," she added.

Trump selected Barrett to fill the seat vacated by the death of Justice Ruth Bader Ginsburg, a leading liberal voice on the country's highest court.

Barrett, if confirmed by the Senate, would give the conservative wing a solid 6-3 majority at the Supreme Court. At age 48, she would also be the youngest member of the nine-justice bench and likely serve for decades to come.

Republicans, who enjoy a 53-47 advantage in the Senate, appear to have enough votes to approve Trump's third Supreme Court pick and they intend to hold a confirmation vote before the November election with an eye to energizing the conservative base. Only two Republican senators have said they would not support taking up a nominee prior to Election Day.

Democrats oppose moving forward with a vote on Ginsburg's replacement so close to the election, citing Senate Majority Leader Mitch McConnell's decision in 2016 to block then-US President Barack Obama's Supreme Court nominee because it was an election year, which all but ensures a fierce confirmation battle on Capitol Hill in the coming weeks.

McConnell and Senate Republicans have argued that this time is different because the Senate and the White House are held by the same party.

In a statement on Saturday, McConnell, a Kentucky Republican, said that he looks forward to meeting with Barrett next week, adding that the nomination will receive a vote on the Senate floor in the weeks ahead.

The Senate Judiciary Committee reportedly plans to start the official process to confirm Barrett on Oct 12, which includes hearings, with a full chamber vote tentatively set for the week of Oct 26.

Senate Minority Leader Chuck Schumer said he "will strongly oppose this nomination," calling it "shameless" efforts to replace Ginsburg less than 40 days before the election.

"This reprehensible power grab is cynical attack on the legitimacy of the Court," the New York Democrat wrote in a statement.

A mother of seven, Barrett was nominated by Trump for the US Court of Appeals for the 7th Circuit in 2017 and was later confirmed by the Republican-led Senate with a 55-43 bipartisan vote.

The jurist previously served on the faculty of the Notre Dame Law School, teaching on constitutional law, federal courts, and statutory interpretation. Prior to that, she clerked for Judge Laurence Silberman of the US Court of Appeals for the DC Circuit and for Associate Justice Antonin Scalia of the US Supreme Court.

Barrett, who earned her bachelor's degree from Rhodes College in 1994 and her J.D. from Notre Dame Law School in 1997, also litigated constitutional, criminal, and commercial cases in both trial and appellate courts as an associate at a Washington, D.C.-based law firm.

Trump's announcement on Saturday came a day after Ginsburg became the first woman to lie in state at the US Capitol. She will be laid to rest at Arlington National Cemetery across the Potomac River from Washington, DC

A renowned champion of women's rights, Ginsburg died last week at the age of 87 due to complications related to metastatic pancreas cancer. She was appointed to the Supreme Court by then-U.S. President Bill Clinton in 1993 and was the second woman appointed to the high court.

"My most fervent wish is that I will not be replaced until a new president is installed," Ginsburg reportedly dictated to her granddaughter Clara Spera a few days before her death.

Trump recently suggested that it was Democratic politicians who wrote Ginsburg's dying wish, a claim that critics have called baseless. The president and the justice had traded barbs since mid-2016, when he was the presumptive Republican presidential nominee.

Trump successfully appointed two conservatives on the Supreme Court, Neil Gorsuch in 2017 and Brett Kavanaugh in 2018, tilting it to the right with 5-4 majority.

US Supreme Court justices, who have life tenure and can serve until they die, resign, retire, or are impeached and removed from office, play an enormous role in shaping the country's legislation and policies on issues such as abortion, LGBT rights, gun rights, health care, climate change, and presidential powers.