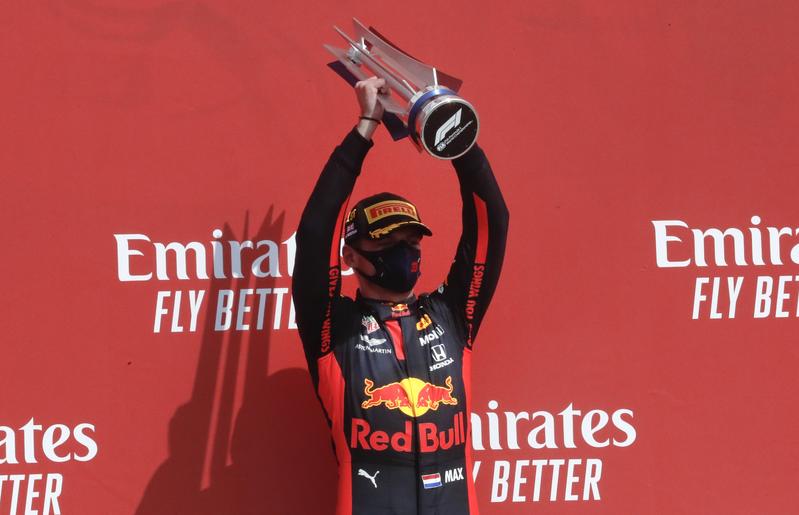 Red Bull driver Max Verstappen of the Netherlands holds up the trophy on the podium after taking first place in the 70th Anniversary Formula One Grand Prix at the Silverstone circuit, Silverstone, England, Aug 9, 2020. (FRANK AUGSTEIN / POOL / AP)

In a race dictated by tyre wear and strategy, six-times world champion Hamilton swept past Mercedes team mate Valtteri Bottas two laps from the end to take second place and stay 30 points clear in the standings.

Hamilton, who gained an extra point for fastest lap, also equalled Ferrari great Michael Schumacher’s record of 155 career podium finishes and extended his own unmatched scoring run to 38 races in a row.

“I didn’t see it coming, but after the first stint it seemed like we were really good on tyres,” said Verstappen as he celebrated a ninth career win that lifted him to 77 points with Hamilton on 107.

“I didn’t really have a lot of tyre issues at all. We just kept pushing.”

An unhappy Bottas dropped to third overall on 73 points after starting on pole position in a race run, like all the others, without spectators due to the COVID-19 pandemic.

“As a team, we were sleeping at some point when Max managed to get ahead of us and my strategy was far, far from ideal. Lots to learn from today, I think,” said the Finn.

Mercedes had won the delayed season’s four previous races, and taken every pole, but Verstappen was alone among the top 10 on the grid to start on the hard tyres and it paid off in a race celebrating the championship’s birth at Silverstone in 1950. 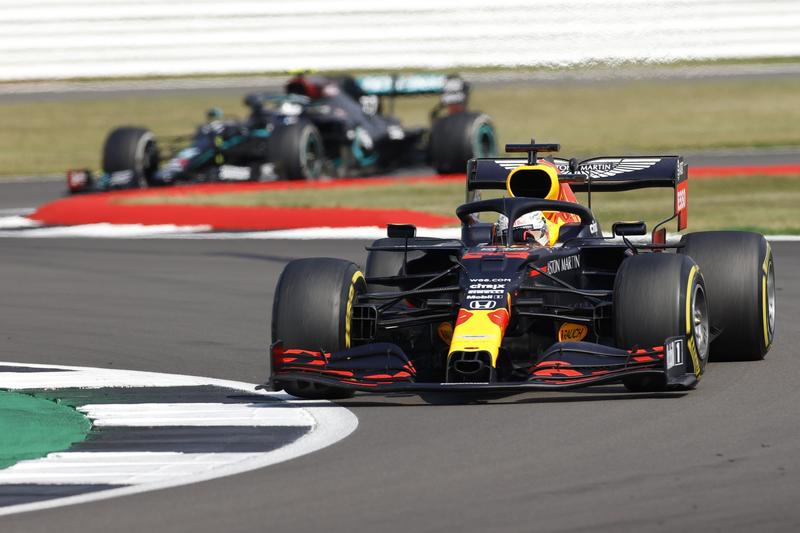 Mercedes were mindful that Hamilton and Bottas had both suffered late blowouts at the previous weekend’s British Grand Prix at Silverstone, when Hamilton won on three wheels, in trying to eke out a one-stopper.

Pirelli had brought softer tyres this time and Mercedes were suffering in a fast-changing two-stop race with Verstappen able to run a longer first stint to seize the initiative.

“The tyre’s not going to blow, right?,” Hamilton asked about his rear left with 17 laps to go. “We think it’s OK. It’s just the blistering,” came the reply.

Verstappen’s confidence throughout was evident, the youngster replying to a team warning about his tyres by saying he was not about to sit behind “like a grandma”.

“We haven’t really had an opportunity in all the races so far to push them and I could see we were pushing them. I tried to put the pressure on, they had to pit, I did my own pace,” he said.

Hamilton ultimately made his second pitstop with 11 laps to go, using his fresh tyres to quickly pass Ferrari’s Charles Leclerc before targeting Bottas.

Leclerc ended up fourth after doing just one stop.

His team mate Sebastian Vettel, a four-times world champion who is leaving at the end of the year, had another dismal afternoon — spinning on the opening lap and fortunate not to take out other cars before dropping to last and finishing 12th.

Hulkenberg had started third as a replacement for COVID-positive Mexican Sergio Perez but his hopes of a first podium at the 178th attempt faded at the start and he ended up making three stops.

The sixth round of the championship is at Barcelona’s Circuit de Catalunya next weekend.