Hong Kong ‘will continue to thrive’

By Joseph Li in Hong Kong 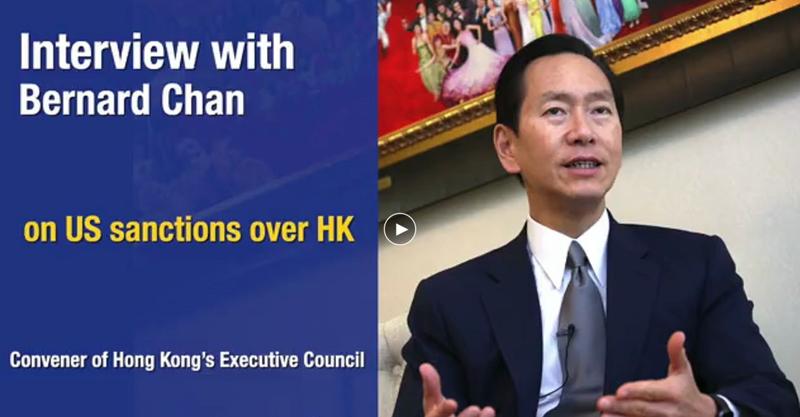 Hong Kong will continue to do well despite US sanctions because the city has the backing of the central government, the convener of the non-official members of the Executive Council told China Daily.

Bernard Charnwut Chan, who is also a Hong Kong deputy to the National People’s Congress, the nation’s top legislature, said the US has hurt its own interests by imposing sanctions on Hong Kong and mainland officials.

The veteran business leader said he has spoken to officials of many US companies that are based in Hong Kong.

In a one-on-one interview on Friday, Chan said that what really concerns many of the 1,300 US companies in Hong Kong is not the new National Security Law for the city, but the US sanctions that followed.

“They are actually not worried about the National Security Law (for Hong Kong). Because why should they worry about it? I mean, they’re here to do business. They are not interested in promoting separatism. They’re not interested to subvert State power,” Chan said.

Instead, they are more concerned about the US actions because many of the US financial companies’ clients are Chinese citizens in Hong Kong and the mainland, he added.

ALSO READ: US sanctions 'only to be self-defeating'

Only hours after Chan talked to China Daily on Friday, the US on Friday listed 11 mainland and Hong Kong officials as sanctioned and barred from financial dealings in the US.  Chan said all this rhetoric about sanctioning the Hong Kong government and Chinese companies is certainly not helpful.

“I already have quite a few friends in business asking me whether it is still OK to invest in the US. So they might consider choosing other places to invest,” Chan said.

Hong Kong, caught in the middle of disputes between China and the US, will be affected, but it may gain at the same time, he said.

“Chinese mainland corporations in the US that are forced to leave and return to China or Asia may choose Hong Kong as the place for IPOs, and the same for Chinese (research and development) talents,” he said.

The hostility in the US against Chinese companies and Chinese scientists and researchers is driving them back to Hong Kong, he said.

“The persecution of Huawei and TikTok shows that the US is targeting business entities, (and this was) aggravated by the arrogant closure of the Chinese Consulate in Houston,” he said.

“I think it is still in the best interest for everyone to see a healthy relationship between the US and China.”

But he again warned that even if the US continues to adopt such policies, Hong Kong is not afraid as “we have China behind us”.

Chan also said he supports the government’s decision to postpone the Legislative Council election by 12 months, to Sept 5, 2021, noting the decision will ensure the election will be conducted in a safe and fair manner.

He suggested the government can make use of the next 12 months to explore ancillary measures such as electronic ballot distribution, electronic voting, voting by mail, and also special voting lines for senior citizens at the polling stations.

Meanwhile, as for the “vacuum period” between the election postponement and the rescheduled election, Chan suggested extending the current legislative term (2016-20) by one year. He said that is “the simplest way to resolve the matter.” The NPC Standing Committee will deliberate a proposal during its four-day meeting that started Saturday about how Hong Kong’s legislature should operate in the wake of the election postponement.

ALSO READ: NPC to decide on legislative operation in HK over deferral

The State Council has submitted a proposal to the NPCSC requesting it to make a decision on the continued operation of the sixth Hong Kong Legislative Council before the 2021 election.