Record buyers get back in vinyl groove 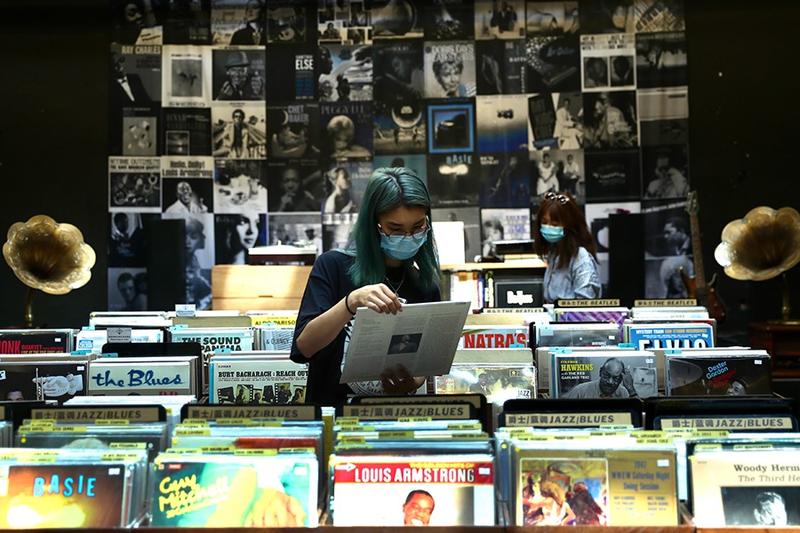 LiPi-Records is one of the biggest stores selling vinyl discs in Beijing. (ZOU HONG / CHINA DAILY)

Since launching his debut album Jay in 2000, Mandarin pop star Jay Chou has built a massive fan base in Asia.

To mark his 20th anniversary in the music industry, the singer will release a set of vinyl records, Chou's record company Sony Music announced on June 30.

Featuring 150 songs from his 14 albums during the past 20 years, the set will include a blank vinyl disc to promote Chou's upcoming album.

"This is the first time I have released on vinyl. My first album was released on Nov 6, 2000, and it's meaningful for me to celebrate my career with a set of such discs," Chou said.

I didn’t like listening to pop music, but when the song (Yesterday Once More) was playing on a turntable, I was overwhelmed by both the sound and design of the album cover

Vinyl plays a small but vital part in China's music industry. Rather than disappearing, the format is making an impressive comeback amid competition from digitalized music.

The resurgence of interest in vinyl also underscores the fact that the country has become a dynamic force in recorded music.

The Global Music Report: Data and Analysis for 2019, published on May 4 by the International Federation of the Phonographic Industry, showed that China remained the seventh-largest market for recorded music.

Chou's longtime friend, lyricist Vincent Fang, who has written songs with the singer since 2000, said, "The release of Chou's old albums on vinyl can serve as time capsules, locking in our memories."

Fans have reacted warmly to Chou's release on vinyl.

Bao Leshan, a 30-year-old Beijing office worker, has reserved a set of the records.

A big fan of Chou since she was a primary school student, Bao has bought all the singer's albums, attended his concerts and even visited Tamkang High School in Taiwan, a location for Chou's directorial debut movie, Secret.

"I have never bought any vinyl records before and I know nothing about them. I don't even have a turntable, but I am planning to buy one to listen to Chou's music," she said.

Total global revenue in the recorded music industry reached US$20.2 billion last year, a rise of 8.2 percent from 2018. Revenue from vinyl rose by 5 percent, and now comprises more than 16 percent of overall physical income.

Vinyl records and the stores selling them remain largely unknown to many fans in China, who are content to listen to music on their smartphones and other devices.

However, there are a number of independent record stores in bigger cities, and more people are buying vinyl records in search of the perfect sound. 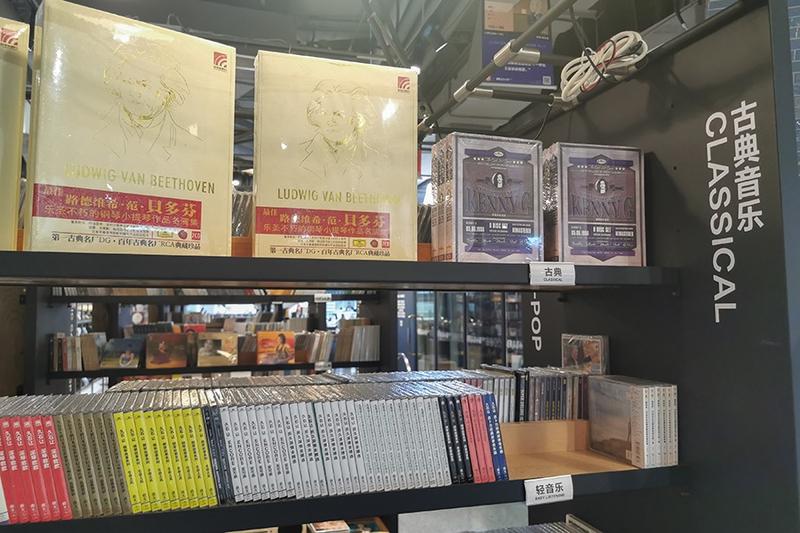 Vinyl records are stocked at a music store in Shanghai. (WANG GANG / FOR CHINA DAILY)

LiPi-Records, one of the biggest stores selling vinyl discs in Beijing, is located in the landmark 798 Art Zone, home to vibrant art galleries, cafes and restaurants.

Inspired by the song Yesterday Once More, released on United States vocal and instrumental duo The Carpenters' fifth album Now &Then in 1973, the store's founder, Ma Chi, started to collect vinyl records.

When he visited a record store in Seoul during a business trip to the South Korean capital in 2007, he heard the song playing on a turntable.

Ma, who formed a punk band while studying flight vehicle design at Beihang University in Beijing and who worked for a Swiss company in the capital, said the song touched him and he became "enchanted" by vinyl records.

"I didn't like listening to pop music, but when the song was playing on a turntable, I was overwhelmed by both the sound and design of the album cover," he said.

The store now occupies a 300-square-meter site and there are three branches－in Shenyang, capital of Liaoning province, where Ma was born and raised, and also Blue Note Beijing and Blue Note Shanghai, two offshoots of the renowned Blue Note Jazz Club in New York.

"I was lucky that the store made a profit not long after it opened in 2009. I didn't plan to run it as a business, just as a hobby. I was glad to have like-minded people drop by to share music and stories with me," Ma said.

The store at the art zone now sells about 1,000 vinyl records a month and has built up a solid fan base.

"The first time I heard music on vinyl was when my mother played it at home on a turntable she bought for 30 yuan, which at the time was her month's salary. I learned to sing songs from those records," Ma, 36, said. 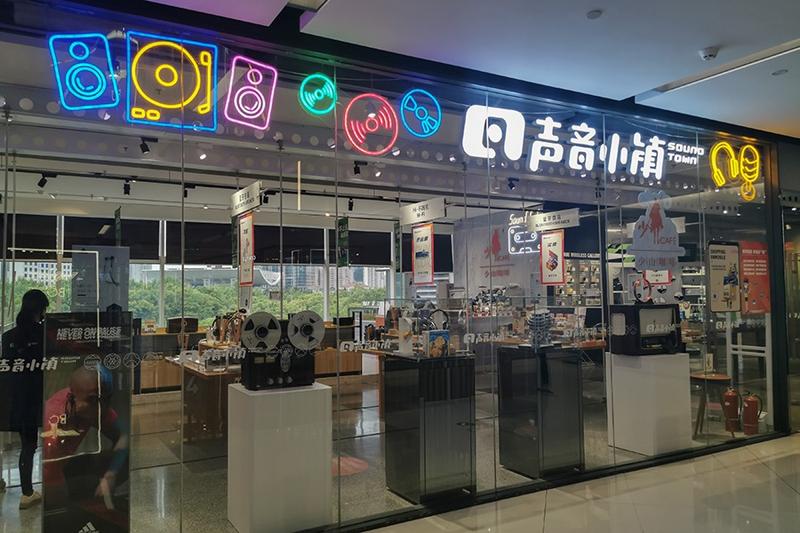 Vinyl records are stocked at a music store in Shanghai. (WANG GANG / FOR CHINA DAILY)

He remembers one of the songs from those discs－The Sea, My Hometown, released in 1982 on the soundtrack for the Chinese movie The Sea is Calling.

"But it's wrong to associate vinyl records with old, outdated music, as many contemporary pop stars, both from China and overseas, have released such records, which have attracted young fans."

Xu Fangfang, who buys vinyl records at second-hand markets in Beijing, said the first such disc she purchased was a copy of the annual CCTV Spring Festival Gala from the 1980s, one of the most-watched TV shows in China.

She became friends with Ma in 2014 when she visited his store in the art zone.

For Xu, a music lover from a young age, listening to albums on vinyl has become a habit.

Seeking the perfect sound, she has bought nearly 400 vinyl discs, including albums by Icelandic singer Bjork, rock bands Queen from the UK and Nirvana from the United States, and live recordings by symphony orchestras. She has four turntables, including an old Yamaha model.

Graduating from art school in Chongqing, Xu, 42, moved to Beijing in the early 2000s, where she worked for an advertising company and shopped at second-hand markets. She now works for a film and television company in the capital.

"Unlike hearing music on a smartphone, listening to a vinyl record is a complete experience, from reading the lyrics on the sleeve notes to putting the disc on the turntable," Xu said. "The sound is etched on the vinyl exactly as it is recorded in analogue. What you hear is the full, complete sound." 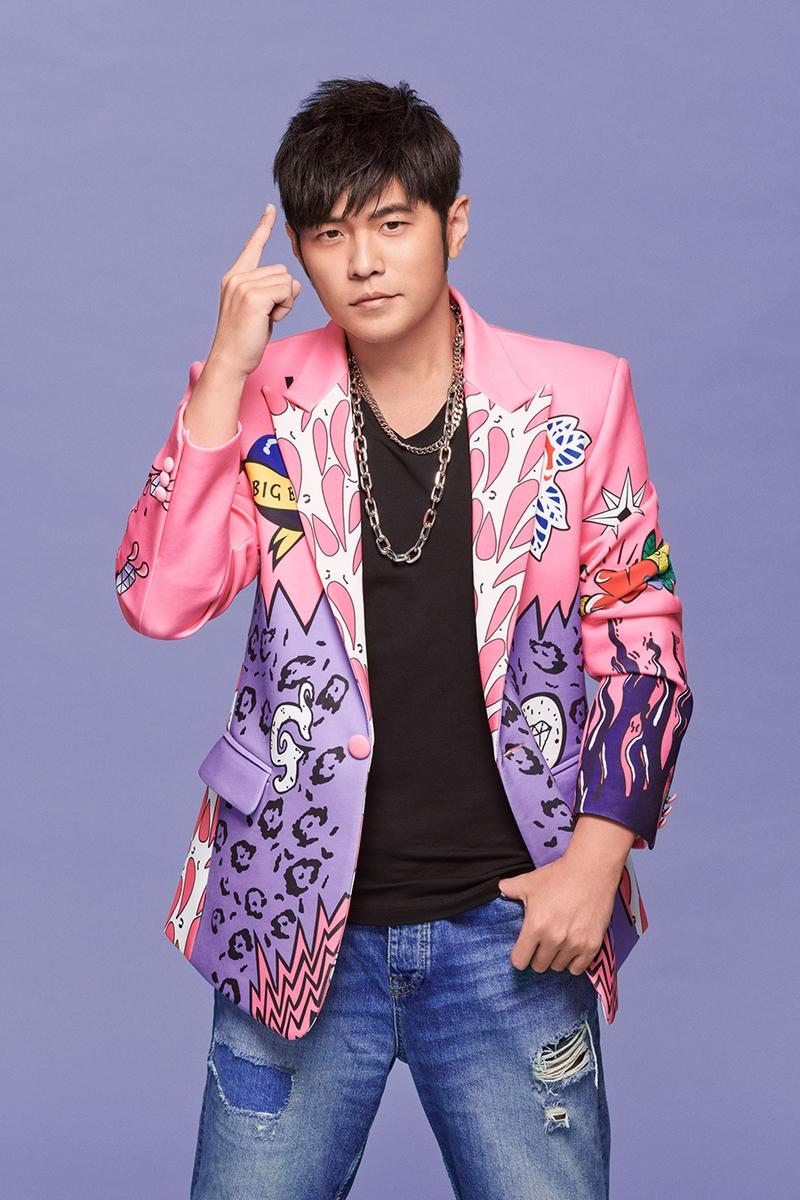 Jay Chou is releasing a set of vinyl records to mark his 20th anniversary in the music industry. (PHOTO PROVIDED TO CHINA DAILY)

In the 1980s, the recording industry on the Chinese mainland was booming, with millions of cassette tapes sold.

However, with the emergence of online streaming, vinyl records appeared to be on the verge of extinction.

Between 2002 and 2005, in particular, sales of CDs and other types of musical recordings fell sharply in China as a result of piracy and online streaming, with customers deserting record shops in droves as they stopped buying physical discs.

Even the bigger record companies struggled to stay afloat.

In the 1990s, China Record Group Co, the biggest and oldest company of its kind in the country, sold about 10 million records a year, including pop, folk and classical music by Chinese singers and orchestras, according to Hou Jun, the company's vice-president.

In the early 2000s, annual sales fell to some 10,000 copies, with a huge change in the way music was consumed leading to many Chinese record companies folding.

In the late 1990s, China Record Group Co closed its last vinyl production line due to the declining market for physical records.

However, in 2018, when the company celebrated its 110th anniversary, it launched a project to revive vinyl output, importing a production line from Germany and setting up a factory in Shanghai.

Hou said: "We are optimistic about the market for physical records in China, although it will take time to recapture the glory years of the 1990s. Completion of the factory shows that the production of vinyl records in China, which started in Shanghai in the 1920s, is ready to take off again in the city."

In 2018, to mark the 40th anniversary of China's reform and opening-up, China Record Group Co released Our New Era, a vinyl disc featuring 12 songs from 1978 to 2018 reflecting the significant changes in China during this period.

Last year, the company celebrated the 70th anniversary of the founding of the People's Republic of China by releasing a set of vinyl records, which included pop and folk songs, instrumental pieces and traditional Chinese opera.

Xiong Zhiyuan, founder and general manager of the Beijing company Zhongkehuijin Digital Technology, said the vinyl resurgence is the result of commercial rediscovery and appreciation of these discs among collectors and record stores.

The company repairs, safeguards and digitalizes a large number of century-old vinyl records.

For example, it has collected all the songs of Peking Opera master Mei Lanfang (1894-1961) from institutions and private collections at home and abroad, including from Mei Baojiu, Mei Lanfang's youngest son who was a prominent Peking opera singer.

Xiong said: "Life is improving all the time in China, and some listeners have realized that vinyl produces a better sound. Many people see it as a kind of tangible entertainment that is just as impressive as works of art."