Hong Kong stocks joined the rest of the world in bull market territory Monday, after a more than US$1.1 trillion rebound.

Mainland investors have been buying record amounts of Hong Kong equities, while sentiment has been fueled of late by a heavy activity of initial public offerings and secondary listings of US-listed Chinese mainland companies

The Hang Seng Index jumped 3.8 percent, extending its rally from March’s low to 21 percent. Tencent Holdings Ltd and Hong Kong Exchanges & Clearing Ltd have contributed 48 percent of the index gains during the period, according to data compiled by Bloomberg.

The market responded positively after the Law of the People's Republic of China on Safeguarding National Security in the Hong Kong Special Administrative Region took effect Tuesday.

Sino Biopharmaceutical Ltd, the gauge’s biggest gainer of 2020 as of June 30, and Tencent were the only two Hang Seng members to fall Monday while underperforming sectors in Hong Kong -- including autos, commodities and financials -- soared.

Mainland investors have been buying record amounts of Hong Kong equities, while sentiment has been fueled of late by a heavy activity of initial public offerings and secondary listings of US-listed Chinese mainland companies, triggering inflows into new-economy shares and HKEX. Meanwhile, mainland stocks have surged to multiyear highs. 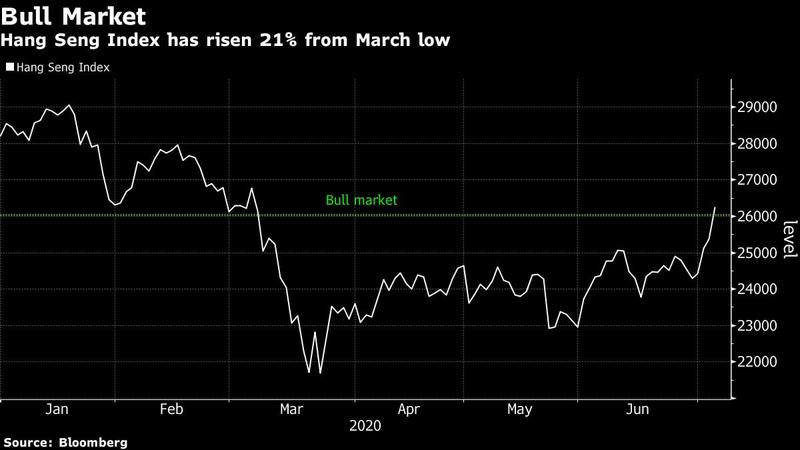 Despite the recent jump, the Hang Seng Index needs to rise another 10 percent to reach pre-pandemic levels. Only nine of the gauge’s 50 stocks are higher for 2020.

However, Jefferies predicts the index should reach 30,000 by year-end, thanks to factors including interest rates and no evidence of outflows despite the city’s economy being in a year-long recession.

Hong Kong’s economy suffered its biggest-ever contraction in the first quarter, and the government expects the city’s economy to shrink between 4 percent and 7 percent in 2020.

A few technical bullish signs are still flashing in the market. The Hang Seng is still trading near the lowest level versus the global peers since 2003, while it is about 50 percent cheaper than the S&P 500 on a price-to-earnings basis, the biggest discount since at least 2005.