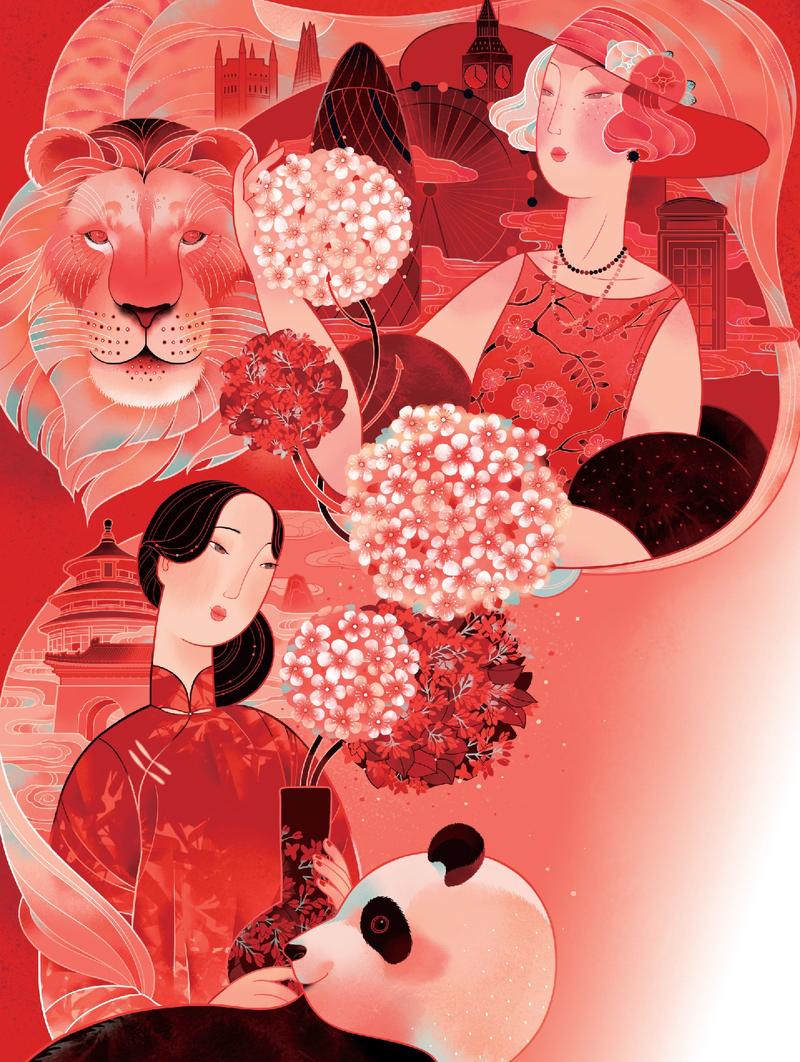 The United Kingdom could be dealt a severe economic setback if Chinese telecom giant Huawei is barred from taking part in creating the country's 5G network, according to experts.

Some Conservative members of Parliament are calling on the UK government to reverse its decision taken in January to back Huawei's involvement in the next generation of wireless network technology.

Many in the business community are worried that any such U-turn would deny the UK the opportunity to be a European leader in the technology at a time when the country's economy needs a significant boost.

The UK has seen the third-highest number of deaths globally from the coronavirus pandemic, its GDP contracted by 20.4 percent in April and the country may fail to reach a trade deal with the European Union by its self-imposed deadline of the end of this year.

Much hinges on a report by the National Cyber Security Centre in the UK, which is due to be published this month. Some believe this may lead to the government backtracking on its earlier Huawei decision.

Alistair Michie, a UK business executive with long ties to China, said, "It will be deeply damaging to the UK if the British government bends to pressure to eliminate Huawei from its 5G network."

Michie, chair of the International Council at the Center for China and Globalization, an independent think tank based in Beijing, added that much of that pressure is coming from the United States.

"The US government is adopting a totally flawed strategy in its attempts to block global digital advances by trying to throttle China. The digital revolution thrives on open borders and exchanges and has already utterly changed the world, with immense benefits for everyone," he said.

The UK telecommunications industry has made its position clear on the issue.

Scott Petty, chief technology officer for Vodafone UK, a leading telecoms company, said any reversal of the Huawei decision would deny the UK a technological advantage.

"The UK's leadership in 5G will be lost if mobile operators are forced to spend time and money replacing existing equipment," he told Reuters.

"The British government should make efforts to expand 5G coverage and invest in the next stage of this technology, instead of stripping out the equipment of the Chinese telecoms equipment maker."

The UK and China have an almost perfect economic symmetry. The UK is the world's largest exporter of services after the US, and China has huge demand for services as it moves its economy away from being dependent on manufacturing.

China also offers the UK a major new market for its goods and services as the latter embarks on new trading relationships after leaving the European Union. The UK is also strategically placed on the western edge of the Eurasian section of China's Belt and Road Initiative.

Although China is the UK's fifth-largest trading partner, with a total volume of£80 billion, few observers doubt that there is huge potential for major growth.

However, in April, a group of Conservative MPs formed the China Research Group, or CRG, with the aim of resetting the relationship between the two countries. Huawei's involvement in the UK's 5G network has been a large part of the group's focus.

The CRG is chaired by Tom Tugendhat, also chair of the House of Commons Foreign Affairs Select Committee. In recent months, he has been a high-profile critic of China in the media.

Many commentators have said that the CRG appears to be following in the footsteps of the similarly-named European Research Group, home to euroskeptic Conservative MPs and which played an important role in the UK leaving the EU.

Chris Yang, chairman of the Hampton Group, a strategic consultancy based in London specializing in Chinese business and investment, fears that the new group has the same closed mind toward China as some in the ERG had about Europe.

"From what I have learned, the proposed reset of relations being led by the China Research Group is not being approached with either an open or an informed mindset," he said.

Yang, who has advised leading Chinese companies－including all banks－setting up in the UK, as well as leading multinationals operating in China, believes there needs to be a more informed debate in the UK about the importance of the China market.

"This discussion is vital. China is on track to become the largest global economy," he said, adding that within the next decade it is estimated that the country will have a middle-class population of 750 million.

"This biggest domestic market in the world by far is one that the UK should not ignore, in order to deliver rising prosperity to British people."

Douglas McWilliams, executive deputy chairman and founder of the Centre for Economics and Business Research, a consultancy headquartered in London, said it is important not to combine Brexit and the UK's relations with China.

"Suggesting that the issues are Brexit-related is missing the point. The problems have come from the deterioration of relationships between the US and China. The EU is facing the same problems, and the UK would have faced them even had the country voted to stay in the EU," he said.

Ian Goldin, professor of globalization at the University of Oxford, said the danger of part of the debate about China in the UK is that it risks a new Cold War, which would be bad for everyone.

"History is unfortunately full of examples of politicians taking their countries down very dangerous and dark roads," he said.

Goldin, a former economic adviser to late South African president Nelson Mandela, said the UK and other European countries need to resist pressure from the US to take its side against China.

Tugendhat, from the CRG, who is a former officer in the UK's volunteer Territorial Army－renamed the Army Reserve in 2013－has even suggested that UK universities should reduce their dependence on Chinese students and relax visa requirements for their counterparts from countries such as India. More than 120,000 students from China are studying at UK universities, providing income of £1.7 billion (US$2.1 billion).

UK author and academic Martin Jacques believes there is "appalling sentiment "behind such a suggestion, as if Chinese students are somehow not to be trusted in an environment where many have been subject to racial abuse.

"The universities are hugely against this (suggestion). The Chinese are easily the largest group of foreign students at British universities. The whole sector would be badly affected by any serious reduction in the number of Chinese students," he said.

"The idea that there is a pool of Indian students in a position to replace them is, frankly, ludicrous. India is a much smaller economy, although that doesn't seem to be widely understood."

Many UK businesses operating in China want to see a deeper relationship between the two countries.

Steve Lynch, managing director of the British Chamber of Commerce in China, said he does not mind a "robust debate", as long as it is informed.

"It is critical that informed voices are heard equally and that assessments are objective," he said.

Many UK businesses remain frustrated that the country's trade policy toward China is often reduced to huge missions, which visit the country every few years.

By contrast, German Chancellor Angela Merkel makes routine visits to China focused on her nation's business interests in the country, where many German companies, such as Siemens and BMW, have a major presence.

Despite the views of some of his backbench MPs, UK Prime Minister Boris Johnson declared himself a "Sinophile" during Prime Minister's Questions in the House of Commons last month.

As mayor of London, he made a number of visits to Beijing, including a high-profile trip during the 2008 Olympics. Some members of the UK business community in China believe he will make similar visits as prime minister once the pandemic is over and a trade deal is agreed with the EU.

Simon MacKinnon, chairman of technology company Xeros China, who is based in Shanghai and has been in China since the 1980s, said he has had indications that Johnson will make such trips.

"After Brexit, the UK has the opportunity to follow our French and German competitors in regular top-level engagement with China on trade and other matters," he said.

"British prime ministers have only come to China every two or three years with a big trade delegation, but the UK business community in China is encouraged to hear that Johnson is looking at more-regular visits."

Even before Johnson took office, there were signs that the UK wanted to build a new firmer relationship with China.

In May last year, Mark Sedwill, the UK's outgoing cabinet secretary and head of the country's Civil Service, took a delegation to China that comprised 12 permanent secretaries from government departments.

Michie, from the Center for China and Globalization, said a visit at this level was unprecedented.

"It laid the foundations for an exceptional understanding between the UK and China. It showed the UK reaching out to China to match the Chinese cultural approach, where long-term stable relationships are paramount.

"Ministerial visits to China often deliver no more than handshakes and staged photos, but this demonstrated a commitment to continuity."

Jacques, author of When China Rules The World: The End of the Western World and the Birth of a New Global Order, said a benign view of colonialism is often a barrier to relations between the UK and China and also other Asian countries.

He said such a view is based on the belief that Western political systems are still universal.

"It is a self-congratulatory view of the West's contribution to the world. People who espouse this view never talk about the malign effect of colonialism and what we did to the world. They are being rather wrong-footed by the Black Lives Matter campaign at the moment and the whole issue of slavery," he said.

However, Yang, from Hamptons, believes that the optimism about UK-China relations that arose during Xi's state visit is still very much alive.

"There might be a vocal minority of political leaders in the UK currently hogging the headlines, but I believe that the goodwill between China and the UK that created the foundation of the 'golden era' remains in place," he said.

"There is a huge opportunity for the UK to create mutual opportunity and prosperity with China in business, particularly through services. This is why it is vital there should be an informed and intelligent strategic analysis undertaken by the UK to decide how its relations with China should progress." 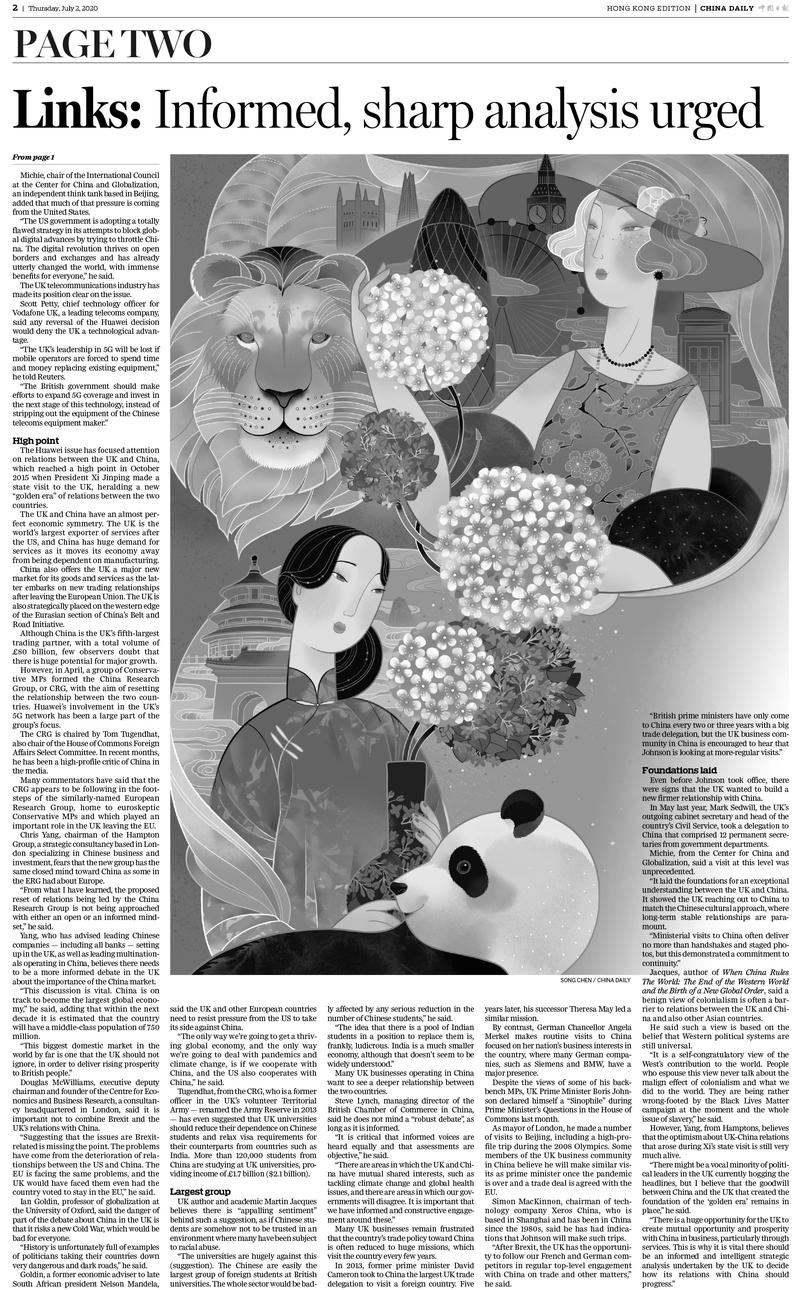