He Ting and Xiao Han were classmates at Shanghai Normal University, where they majored in traditional Chinese painting, an ancient art they were so enthralled with that they decided to make a career out of promoting it in the modern era.

Despite its long history, artists He Ting and Xiao Han believe that traditional Chinese paintings, which usually evokes a sense of an idyllic life and tranquility, can still be seen as vibrant in today's busy world

After completing their graduate studies, the duo took on jobs, such as art editor or a lecturer at a school for the elderly, before realizing that the best way to promote the ancient art is to experiment with it themselves, as well as present it in a way that is relevant to younger generations.

The pair, both aged 30, are now full-time artists running their own studios for traditional Chinese paintings.

Traditional Chinese painting, dating back thousands of years, is usually created using ink and water-based colors on materials such as paper or silk.

Despite its long history, He and Xiao believe that the art, which usually evokes a sense of an idyllic life and tranquility, can still be seen as vibrant in today's busy world.

This concept of theirs is now being showcased in a collection of 28 paintings at the Shanghai Public Art Museum. The ongoing exhibition will end on July 5.

The paintings, designed to fit round and folding fans, come in different styles.

Xiao's paintings are created on round spun silk fans. Most are inspired by the pure, simple life of people in the Southern Song Dynasty (1127-1279) and the idyllic poems depicting pastoral landscapes and rural life by Chinese poet Lu You during the Song Dynasty (960-1279).

"That's my ideal painting style and ideal life in a busy world," says Xiao, who has set up a home studio near Huangxing Park in Shanghai with a window allowing him to enjoy the sunrise. Xiao depicts the life he pursues in his paintings, which feature scenes of people making tea, reading, and listening to birds chirping. 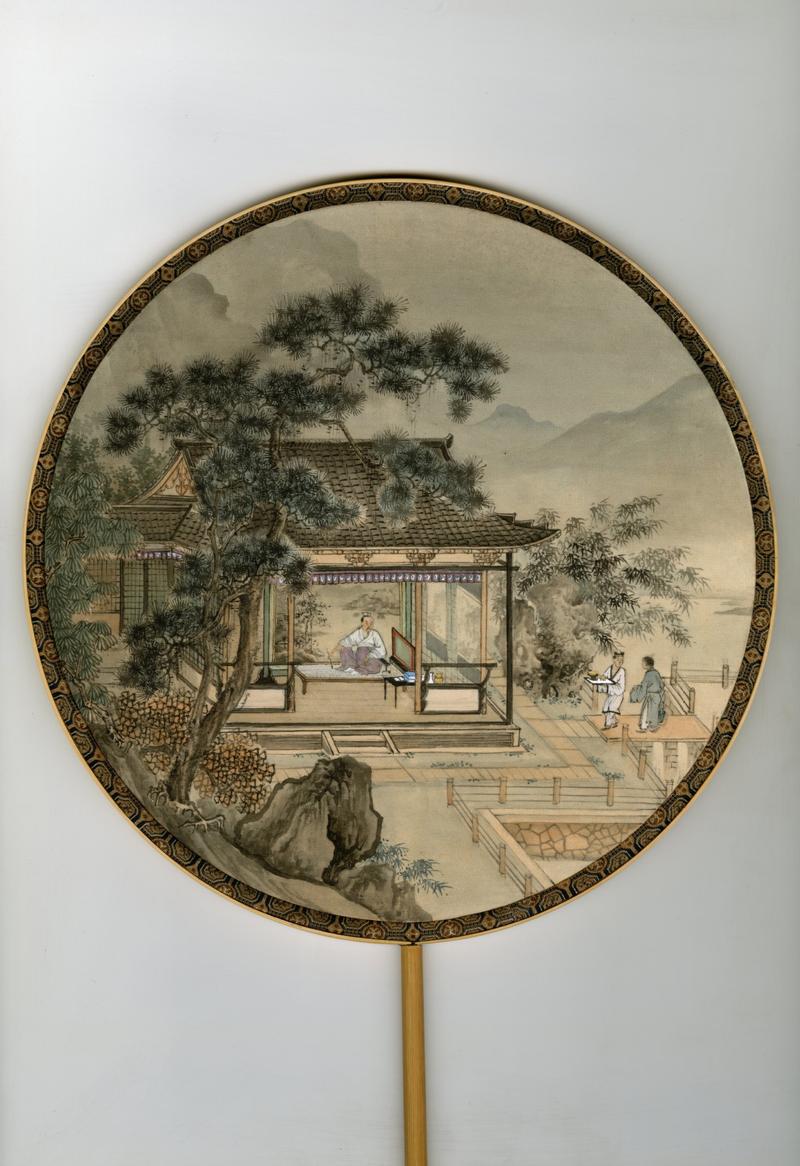 A round silk fan featuring a traditional Chinese painting by Xiao Han is among the 28 artworks on show at the Shanghai Public Art Museum. (PHOTO PROVIDED TO CHINA DAILY)

Instead of focusing on people and life, the folding fans decorated by He Ting, on the other hand, feature paintings that illustrate landscapes, birds and fishes.

Born in the coastal city of Xiangshan in Zhejiang province, He fancies the warm, delicate views of Jiangnan water towns.

In addition to Chinese painting techniques, He also draws pattern styles and color designs of Japanese Nihonga and Western paintings, adding bright tones to the works. He only chooses light colors from Western paintings that can fit into the style of Chinese ink.

In an attempt to reach a wider audience, especially younger generations, He has been sharing his works on the popular video streaming website Bilibili.

To find inspiration, the duo frequent bookstores, art exhibitions and visit scenic spots, such as Huangshan Mountain in Anhui province, to do sketching.

"We're lucky to be living in an era where the government fully supports the culture industry and is promoting the revival of traditional Chinese culture. As the country develops, artists gain more opportunities to spread the culture both at home and abroad," says He.

He is presently working on developing cultural and creative products and online mini-programs to promote art students' innovative ideas in the future.

Xiao says he plans to further his studies in poems and arts history. He also wants to travel extensively by the time he turns 40.

"Traveling expands my knowledge and experience beyond the metropolis and textbooks, which will greatly broaden my horizon and benefit the creation of artistic works," Xiao says.

The artist also hopes to pursue the kind of life depicted in ancient paintings and integrate the essence of these ancient works into his own creations.

"In this way, my real life can be similar to the ideal life in art works, and the works I create can show the spirit of both earlier masters as well as my own," he says.