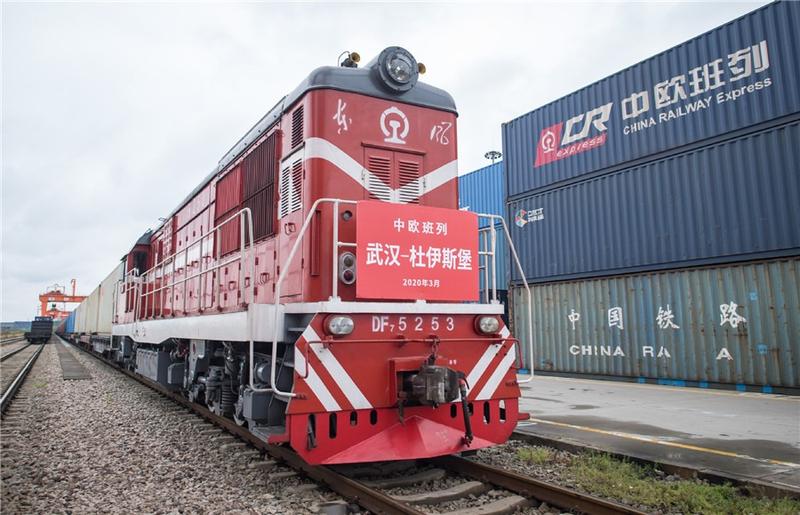 In this March 28, 2020 photo, a China-Europe freight train bound for Duisburg of Germany pulls out of the Wuhan terminal of China Railway Intermodal in Wuhan, Central China's Hubei province. (PHOTO / XINHUA)

President Xi Jinping reaffirmed China's commitment to stepping up the planned political agenda it has with Germany and the European Union in a telephone conversation with German Chancellor Angela Merkel on Wednesday night.

Experts said the global pandemic has become a catalyst for China and the EU to reshape their relationship. Though they have differences in many fields, cooperation remains the first priority for both parties, they said

It is an indication, experts said, that China-EU coordination and cooperation will create more global stability amid the COVID-19 pandemic.

The phone call between Xi and Merkel－whose country will take over the EU's rotating presidency during the year's second half－came as a series of diplomatic events between China and the bloc had to be postponed due to the novel coronavirus outbreak.

Xi told Merkel that China stands ready to work with Germany and the EU to strengthen strategic cooperation, uphold multilateralism, tackle global challenges and jointly add certainty to the current world of uncertainties.

ALSO READ: China to work with Germany, EU to add certainty to the world

Given that the Chinese economy's fundamentals remain unchanged in signaling stable and long-term growth, Xi told Merkel that the country is still committed to further opening-up to the rest of the world and wants to expand international cooperation.

Xi said the "fast track" launched recently between China and Germany to help their enterprises speed up the resumption of business activities also contributes to maintaining the stability of international industrial and supply chains.

On Saturday, a charter flight operated by Germany's Lufthansa Airlines brought around 200 German business executives and technicians to Tianjin thanks to the "fast track" arrangement.

Germany greatly appreciates the announcement made by Xi that a Chinese COVID-19 vaccine would be a global public good, Merkel said. Under current circumstances, she said, it is crucial to enhance international solidarity and multilateralism to win the global fight against the pandemic.

Germany is willing to strengthen exchanges with China and continue to support the World Health Organization playing its important role so as to promote international public health security cooperation, she added.

It was the third telephone conversation between Xi and Merkel since the start of the COVID-19 outbreak.

Foreign Ministry spokesman Zhao Lijian confirmed on Thursday that a summit of China and EU countries planned for September in Leipzig, Germany, will be rescheduled because of the pandemic. China is willing to continue coordination and communication with Germany and the EU about the event, he said at a daily briefing.

A summit between China and Central and Eastern European countries set for the first half of the year in China was also postponed.

Experts said the global pandemic has become a catalyst for China and the EU to reshape their relationship. Though they have differences in many fields, cooperation remains the first priority for both parties, they said.

Huang Ping, former director of the Institute of European Studies at the Chinese Academy of Social Sciences, said the world needs coordination and cooperation between China and the EU. Both China and the EU uphold multilateralism, openness and inclusiveness, which benefits them and other regions, too, Huang said.

At a news conference in Brussels last week, EU High Representative for Foreign Affairs and Security Policy Josep Borrell underlined the importance of the relationship with China, and said the pandemic has accelerated existing trends.