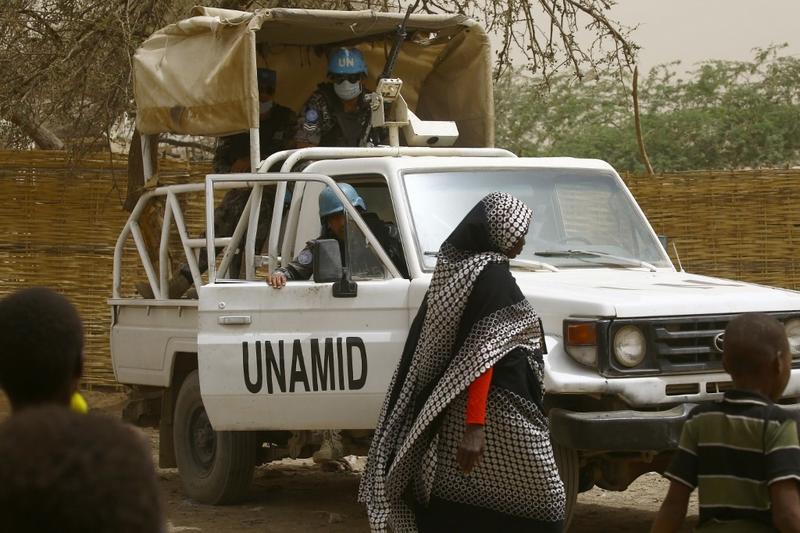 In this April 12, 2016 photo, members of the UN-African Union mission in Darfur (UNAMID) exit their vehicle at the Zamzam camp for internally displaced persons in Northern Darfur. (ASHRAF SHAZLY / AFP)

UNITED NATIONS - The Security Council on Thursday adopted two separate resolutions to extend the mandate of the United Nations-African Union Hybrid Operation in Darfur (UNAMID) for two months, and to set up a follow-on presence in Sudan.

Resolution 2525 decides to extend UNAMID's mandate for two months, till Dec 31, 2020, and further decides that UNAMID shall maintain its current troop and police ceiling during this period. The Security Council intends to decide by Dec 31, 2020, courses of action regarding the responsible drawdown and exit of UNAMID.

The council, in a separate resolution, decides to establish a UN Integrated Transition Assistance Mission in Sudan (UNITAMS) for an initial period of 12 months.

UNITAMS is tasked to help Sudan with its political transition; to support peace processes and the implementation of future peace agreements; to assist peacebuilding, civilian protection and rule of law; to support the mobilization of economic and development assistance and coordination of humanitarian assistance.

The western Sudanese region of Darfur has been plagued by a war between Sudanese government forces and the indigenous population since 2003. UNAMID was established by the UN Security Council in July 2007 to help maintain and mediate peace.