Restrictions eased in some areas, but threat continues 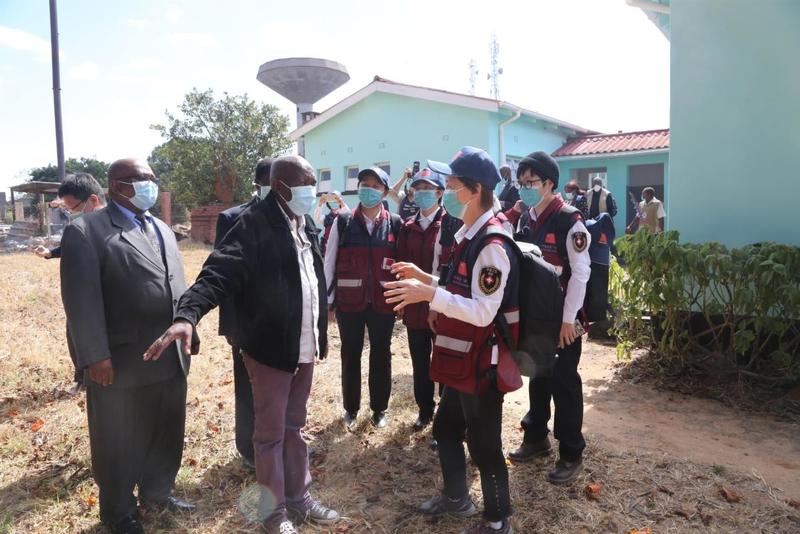 Editor's note: The world faces huge challenges during the COVID-19 outbreak, and maybe even greater ones when it is over. Here, in the 12th part of a series titled "One World, One Fight", we look at how countries can work together to fight the virus and meet the challenges when the pandemic ends.

For the past few years, Andrew Gatera has run a travel agency catering to visitors from around the world wishing to visit Rwanda and other East African countries.

He said his business was very promising until the COVID-19 pandemic struck the continent, totally changing people's lifestyles and ravaging economies.

Gatera, 34, managing director of G-step Tours, based in Kigali, the Rwandan capital, said that even though some African countries have started to lift lockdowns imposed to contain the novel coronavirus outbreak, the situation is still difficult, especially for the tourism industry.

Since the outbreak emerged in Rwanda in March, his company has halted nearly all its business.

"We have had so many cancellations from clients who were supposed to visit Rwanda and elsewhere in East Africa," he said.

Gatera, who is uncertain about the future of his business, frequently asks people if they will have the confidence to travel again soon, or if they will only start thinking about doing so next year.

He also said his family and friends have become accustomed to wearing face masks and keeping at least 1 meter apart from each other.

Meanwhile, in Cairo, the Egyptian capital, Michael Lee, 36, business manager at a Chinese internet company, said all commercial visits to clients have been canceled, and he has to rush home each day before a curfew takes effect.

"Some of my friends in Africa have returned to their home countries, as they are concerned about the spread of the virus as well as the limited medical services in Egypt," he said.

More than three months after Africa's first coronavirus case was reported on Feb 14 in Egypt, the outbreak has spread to all 54 countries on the continent.

According to the Africa Centres for Disease Control and Prevention, there were 147,099 confirmed cases across the continent as of Monday, with 4,228 deaths. South Africa, Egypt, Algeria and Morocco are among the hardest-hit countries.

Some African nations have recently started to gradually and cautiously ease anti-coronavirus measures to help life return to some semblance of normality and for economies to recover. Others have extended lockdowns or strengthened containment measures to avoid a rise in the number of new infections. 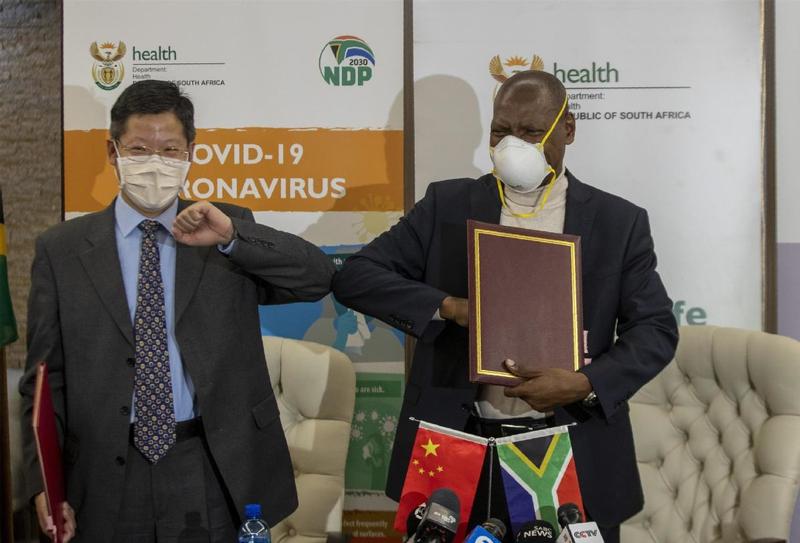 Li Nan, a representative from the Chinese embassy in South Africa, bumps elbows with Zweli Mkhize, the South African minister of health, during a handover ceremony in Johannesburg for the arrival of emergency medical equipment from China in April. (THEMBA HADEBE / AP)

But the Department of Basic Education has delayed Monday's reopening of schools for students in grades 7 and 12 by a week, as teachers' unions and governing bodies said the schools did not have enough protective equipment to keep pupils safe.

As of Sunday, the country had reported 32,683 cases of COVID-19 with 683 deaths, according to health authorities.

Cyril Ramaphosa, the country's president, said last month that restrictions in most areas, except a number of COVID-19 hotspots, would be eased to allow more businesses to reopen and greater movement of people.

A strict lockdown was imposed in the country in late March, with people only allowed to leave home to shop for food or seek medical help. On May 1, the restrictions were eased slightly, with some businesses allowed to reopen.

On Saturday, Egyptians were ordered to wear face masks in public when using private transportation and when visiting government offices, as the country eased a partial lockdown imposed during the Eid alFitr holiday after the Muslim holy month of Ramadan. Violators will be fined and a national curfew from 8 pm to 6 pm has been extended for another two weeks.

As of Sunday, 24,985 confirmed coronavirus cases and 959 deaths from the virus had been reported in Egypt.

In Morocco, a national lockdown imposed in late March has been extended until June 10, with the situation in the country remaining "stable and under control, but not entirely reassuring", Prime Minister Saad Eddine El Othmani said.

A total of 7,807 confirmed coronavirus cases had been reported in the North African nation by Sunday, with 205 deaths.

Tang Xiaoyang, a researcher in African studies at Tsinghua University in Beijing, said African countries have tried hard to contain the outbreak, with most nations imposing lockdowns or other restrictive measures. The number of infections and deaths has not been as high as initially predicted.

He said that although a shortage of testing kits in many African countries may have given a false picture of the number of infections, a relatively young population, as well as high temperatures, "could have also made the continent less vulnerable to the virus". 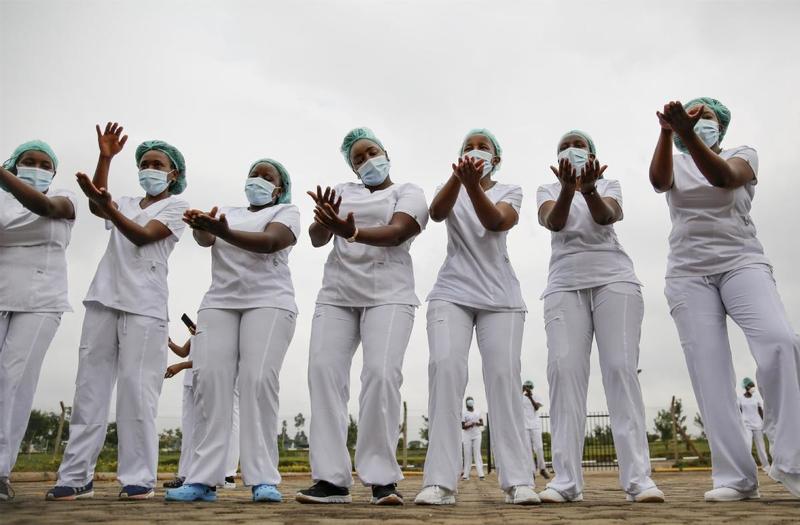 Matshidiso Moeti, the World Health Organization's regional director for Africa, said recently that in most of the continent's countries "there will be a slower peak and a lower level of infections than initially projected in our modeling". The revision was based on the success of some measures put in place by African governments, such as partial lockdowns, social distancing and hand-washing.

An earlier WHO assessment predicted that coronavirus infections in Africa would peak five weeks after the first case was reported in February, and that about 26 percent of the continent's population would become infected.

Tang said that although the situation seems better than predicted, the pandemic has weakened Africa's fragile health systems, ravaged its economy and aggravated food security threats. These three challenges will not disappear anytime soon, as the number of confirmed coronavirus cases in Africa is still growing.

"For the moment, African countries should be cautious about reopening and also be prepared to coexist with the virus for a certain period of time," he added.

He Wenping, a researcher at the Institute of West-Asian and African Studies and China-Africa Institute at the Chinese Academy of Social Sciences, said African countries have relatively weak healthcare systems, poor sanitary conditions and public awareness, and face a shortage of medical supplies.

"Africa's fragile healthcare systems, which have already been overwhelmed by other infectious diseases such as the Ebola outbreak and HIV, will not be able to cope with a large-scale transmission of COVID-19," she said.

She added that many African countries do not have enough medical workers, and some face severe shortages of essential supplies such as face masks and personal protective equipment. In Mali, for example, there is just one ventilator per 1 million people.

"African countries should be alert to the changing coronavirus situation and make quick and effective responses accordingly. If the virus began to spread rapidly, it would be a disaster for the continent," she said.

The pandemic has badly affected the African economy, with at least 42 countries imposing partial or full lockdowns to contain the pandemic. Businesses have shut down, demand for products and services has dropped and there has been a lack of operational cash flow.

In a recent report, the United Nations Economic Commission for Africa estimated that a one-month full lockdown across the continent would cost it about 2.5 percent of annual GDP, equivalent to some US$65.7 billion per month. This is separate from and in addition to the wider external impact of COVID-19 on Africa in terms of lower commodity prices and investment flows. 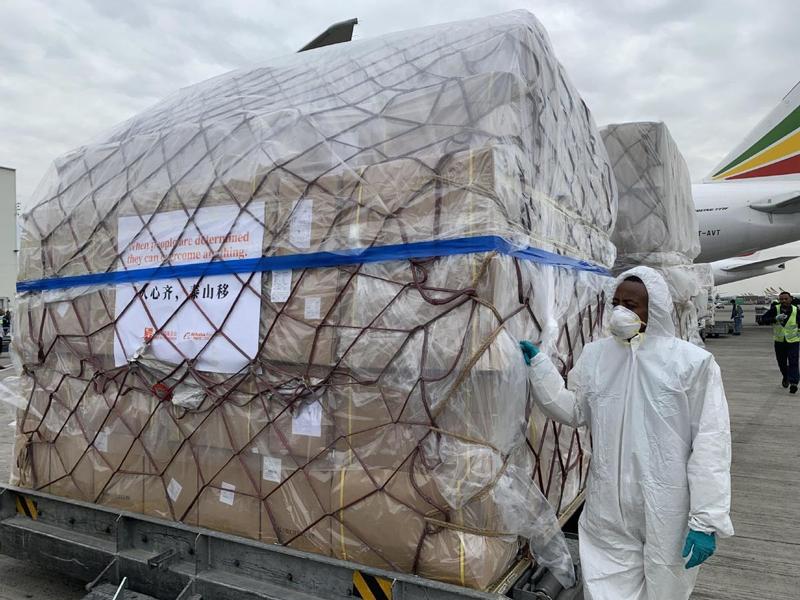 Companies surveyed by the commission reported operating at only 43 percent of normal capacity, while 70 percent of slum dwellers said they were skipping meals or eating less as a result of the outbreak.

"I believe that reopening the economy, and at the same time preventing the spread of the pandemic, is a very difficult matter, but exceptional laws can be enacted to prevent large gatherings, in addition to setting safety instructions for all industrial and commercial establishments and others," he said.

One of the most sensitive issues facing policymakers is the impact of lockdowns on food security. The 2020 Global Nutrition Report said Africa has to tackle increasing food and nutrition security threats, as the pandemic is worsening already-fragile agricultural systems and undermining the continent's efforts to feed its people.

According to the UN World Food Programme, before the pandemic emerged, Africa accounted for the majority of some 212 million people worldwide who are "chronically food insecure and the 95 million who live amidst acute food insecurity".

Moeti, from the WHO, said COVID-19 has escalated food shortages in Africa, as containment measures such as lockdowns, curfews and social distancing hamper the storage, processing and transportation of food. Moreover, low-income households have borne the brunt of restricted movements amid loss of income and an inability to access open-air markets－often the source of local staples.

Tang said African countries should adopt careful and gradual reopening based on active learning and data collection of the virus, which is still accelerating in many nations on the continent.

"Getting Africa back to normality will be a difficult process and will require global communities' support, whether in medical supplies, food supplies or economic recovery," he said.

Tang added that African countries should take advantage of being behind the curve (of infections) to learn from other regions' experiences with lockdown exit strategies. They should also quickly put in place testing and treatment systems in collaboration with global communities.

Xinhua and agencies contributed to this story.