By Chen Zimo and Zhao Ruinan in Hong Kong 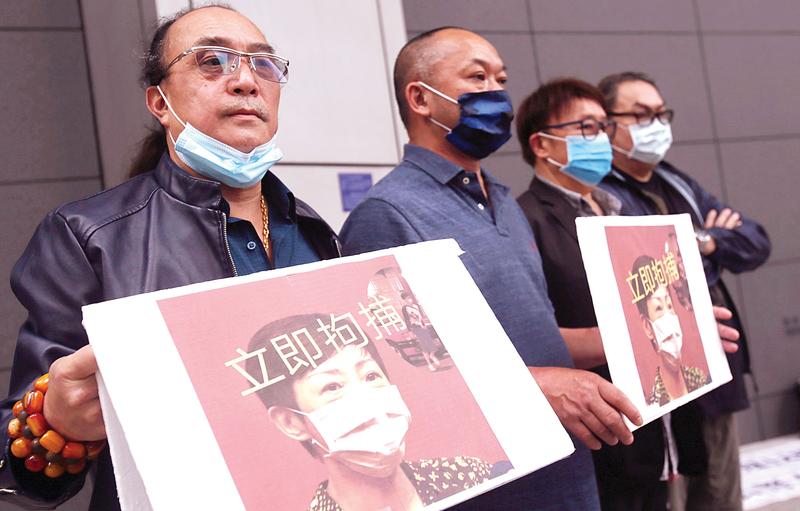 Local residents protest outside the headquarters of Hong Kong police on Tuesday, calling for the arrest of Legislator Tanya Chan Suk-chong for breaching the ban on public gatherings of over four people. The placards with Chan’s photo read: “Prompt arrest”. (PARKER ZHENG / CHINA DAILY)

Hong Kong’s leaders and residents are calling for stricter enforcement of a ban on assemblies of more than four people after a lawmaker flouted the ban by attending a gathering at a local bar attended by about 40 people.

If official instructions prove ineffective in disciplining the public, the government will not hesitate to take tougher measures to enforce these regulations

The ban took effect in Hong Kong on March 29 as part of stricter moves to stop social gatherings and to control the spread of the coronavirus.
Over the weekend, law enforcement officials from different departments had issued 905 verbal warnings to people violating the ban.
In one of the most controversial cases, about 40 people were reported to have gathered at a bar on Sunday night. They then received a verbal warning from police who had gone there to deal with a noise complaint.
Among those at the bar was lawmaker Tanya Chan Suk-chong. She later defended her actions by saying that as a lawmaker, she had qualified for an exemption to the ban and could have a meeting.
Barrister Lawrence Ma Yan-kwok said the offenses showed that verbal warnings and fines were not sufficient to deter people from flouting the ban.
Many violators, including Chan, clearly understood that the government was trying to ensure that people maintained social distancing. But these people had ignored the ban, believing they would not be arrested, prosecuted or even jailed, explained Ma.
He said the government should consider arresting and prosecuting violators because this was in the public interest. This would act as a deterrent to other people; the public would then feel compelled to maintain social distancing to avoid further infections. This would also help to relieve pressure on the healthcare system, Ma added.
Elanie Cheung Hoi-yee, a citizen in her 50s, condemned  the bar gathering as “unacceptable” at a crucial time when the city is fighting the coronavirus. Cheung said that as a public figure, Chan was irresponsible and had set a bad example for the public.
“When 40 people gathered at a bar during the pandemic outbreak, how can they ensure public safety if someone among them has been infected with the virus? Such a gathering can be extremely dangerous before the epidemic has been brought under control. Chan was deliberately violating the ban,” she told China Daily.
What a responsible citizen should do at a time like this, argued Cheung, is to abide by the restriction order in a disciplined way. This would help to contain the spread of the coronavirus, she added.
In response to critics of enforcement of the ban, Chief Executive Carrie Lam Cheng Yuet-ngor said on Tuesday the government would enforce the law more strictly from now on. Anyone defying the ban faces a maximum penalty of a fine of HK$25,000 (US$3,225) and a prison term of up to six months.
If official instructions prove ineffective in disciplining the public, the government will not hesitate to take tougher measures to enforce these regulations, said Lam.
She said the government wanted the public to cooperate and exercise self-discipline on issues that have a far-reaching impact on the community. It therefore gave only verbal warnings during the first stage. However, “every regulation should be strictly enforced,” said Lam.
Hong Kong police issued the city’s first fixed penalty notice under the gathering ban on Sunday, one week after the ban took effect on March 29. Six men who gathered to play chess and observe the game in Kwai Chung, were fined HK$2,000 (US$258) each. On Monday, a group of 13 people were fined after they were found partying at a community center in Sha Tin.