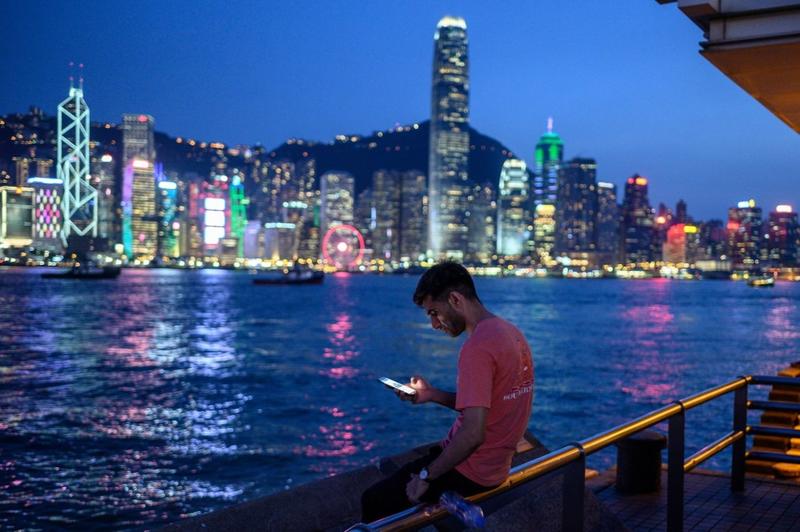 A man looks at his mobile phone as the Hong Kong skyline is seen across Victoria Harbour from the city's Tsim Sha Tsui district, Aug 7, 2019. (PHILIP FONG / AFP)

HONG KONG - At least five more patients confirmed to be infected by the coronavirus were found connected with bars, as Hong Kong recorded 43 new cases on Friday, taking the tally to 845.

The latest count came one hour before the government’s order to close all bars and pubs for two weeks took effect at 6 pm on Friday. The ban was announced on Thursday night.

Two of the newly infected patients were working or performing at bars. The third patient is a friend of a previously confirmed patient belonging to a band at a bar in Lan Kwai Fong.

So far, at least 74 COVID-19 patients were found to have visited bars and pubs in the city during the incubation period. They were the sources of at least 16 secondary and tertiary infections of family members and friends who had not been to any pub

Another patient is an airline cleaner, whose husband, confirmed as infected earlier, is a bar musician. A man who visited All Night Long, a bar in Tsim Sha Tsui, was also confirmed on Friday.

Health authorities are still investigating whether a man, returning from the Netherlands in mid-March, was infected when he went to the pubs later.

So far, at least 74 COVID-19 patients were found to have visited bars and pubs in the city during the incubation period. They were the sources of at least 16 secondary and tertiary infections of family members and friends who had not been to any pub.

The latest 43 patients reported on Friday are aged between 16 to 60. Of the group, 34 patients had recently returned from overseas, including a nurse in Tuen Mun Hospital who came back from London in late March. She was not assigned to caring for COVID-19 patients and have gone on leave since March 9.

Deputy Secretary for Food and Health Chui Tak-yi appealed to residents to hold off their visits to cemeteries for tomb sweeping at Ching Ming Festival this weekend, citing a surge in infections in the past week.

The Hospital Authority said 60 patients in a good condition have been transferred to “second-tier” isolation beds to make available more isolation beds for new patients.

Nineteen more patients have been discharged from hospital on Friday, while eight have remained in a critical condition.