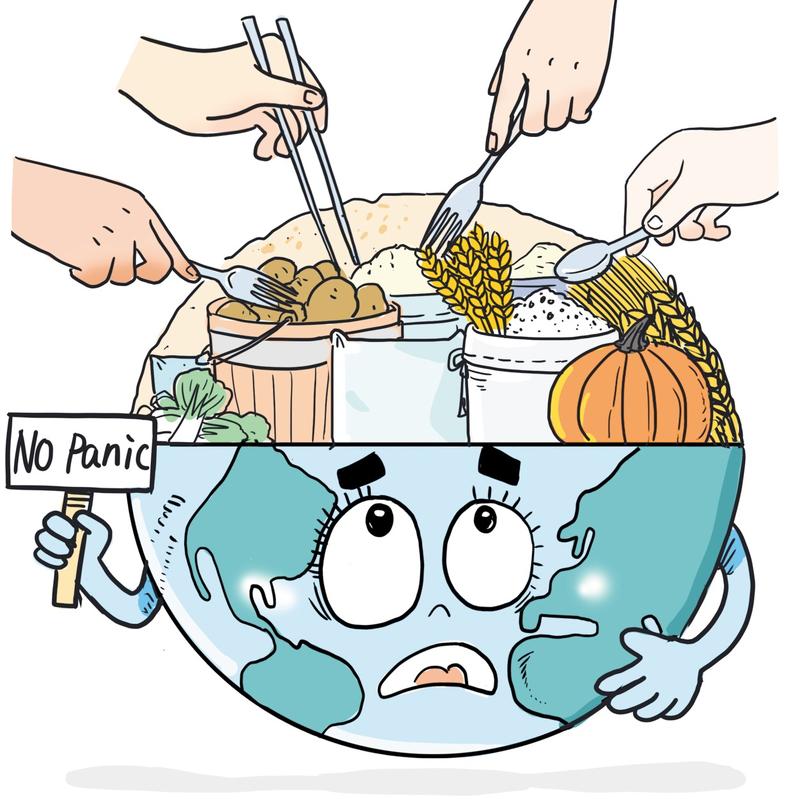 Global food security could be under threat. Not because of shortage of food supply, but because of panic export bans by national governments and panic purchase by people. This panic behavior, especially because of the novel coronavirus pandemic, could potentially lead to a food crisis, making poor, hungry and malnourished people even more vulnerable.

While China has largely controlled the spread of the virus in the country, the outbreak outside continues to intensify. There is hardly a country where the numbers of confirmed cases and deaths are not rising. And now Europe－Italy, Spain and Germany in particular－and the United States have become the new epicenters of the pandemic.

So far, we have not seen any food shortage or drastic increase in prices globally. The Food and Agriculture Organization's estimate for last year's global cereal production is 2,719 million tons, almost 62 million tons (2.3 percent) more than in 2018 and 4.7 million tons more than forecast in February.

The estimate for global production of coarse grains for 2019 has been raised by 5 million tons to 1,444 million tons－2.4 percent higher than in 2018－since the previous report in February. FAO data also show that due to adequate supply of wheat and a drop in the demand for feed, cereal prices declined 0.9 percent from January to February, although rice prices increased due to strong demand in the Far East and Eastern Africa.

Last year, China had a bumper grain harvest of 664 million tons, up 0.9 percent over 2018. For staples such as rice, wheat and corn, China does not depend on the international market; it imports less than 5 percent of its need. In addition, China has adequate stocks of rice and wheat, and the government has taken several measures to ensure that spring planting is not affected by the outbreak. In the short term, food supply is secure. But in the medium and long run, attention needs to be paid to the livestock sector, and import of soybeans and meat.

However, if the novel coronavirus spreads rapidly in Africa, South Asia and Latin America, the situation could change dramatically. Many countries in these regions are already fighting hunger and malnutrition, and they are home to a large percentage of the more than 820 million people suffering from hunger and nearly 150 million children stunted due to lack of proper food and nutrition. Besides, desert locusts and fall armyworms are further threatening food production in Africa and parts of Asia.

The most worrying factor is the panic behavior of consumers and national governments because of the coronavirus outbreak. Many consumers have begun stockpiling food and other daily necessities. Due to restrictions on the movement of people and goods, supply chains are not being able to meet the sudden drastic rise in demand and, as a result, prices have increased in some local markets.

Panic bans on food exports at the global level poses the biggest risk, however, and can disrupt the global food trade and markets on a large scale. For instance, Kazakhstan, one of the world's biggest exporters of wheat flour, has banned the export of not only wheat flour but also carrots, sugar, potatoes and some other products. Serbia has banned the export of sunflower oil and other goods. Russia has left the door open to shipment bans, saying it is assessing the situation weekly. And Vietnam has begun restricting rice exports.

Panic hurts poor more than anybody else

The 2008 food price crisis taught us a valuable lesson. Triggered by droughts in Australia and Argentina, the food price crisis prompted different countries to adopt different policies to restrict food exports. For example, there was no shortage of rice, yet many countries, due to panic, imposed higher taxes on rice exports or banned rice exports altogether. As a result, rice prices doubled in the global market in six months, causing severe disruptions in rice trade and triggering a food price crisis.

The Ebola outbreak in three West African countries of Sierra Leone, Liberia and Guinea is another example. Due to restrictions on the movement of people and vehicles, local farmers could not purchase inputs or sell their agricultural products, and the consequent disruption in both domestic supply and imports of foods led to price hikes in urban areas. School meal and nutrition programs, too, were affected because food could not be transported to schools.

More important, the number of hungry people is likely to increase again this year, as lockdowns and restrictions on the movement of people and traffic have reduced inputs and labor in the farm sector leading to a decline in food production and supply. Plus, slower economic growth is indirectly impacting millions of people's food security.

The coronavirus pandemic will cause a global recession in 2020 that could be worse than the one triggered by the 2008-09 global financial crisis, although world economic output should recover in 2021, according to the International Monetary Fund. And an International Food Policy Research Institute study shows that for every 1 percentage point decline in the global economy, the number of poor－and therefore the number of food insecure people－would increase by 2 percent, that is, by 14 million. And the biggest regional poverty impact would be on Africa.

The novel coronavirus is still spreading in many parts of the world, and it is difficult to say when it would be fully contained. So to ensure food security for all, we need to take some urgent actions at the global and national levels.

First, although global supply is adequate and stable, imbalances in supply and demand at the local levels could lead to price hikes and market volatility. So global, national and local food prices and markets need to be closely monitored. Also, transparent dissemination of information will ensure that markets function smoothly, the government better manages the food markets, people do not panic, farmers make rational production decisions, and consumers do not hoard foods. And it is equally important to prevent wild speculations in the stock and commodity markets.

Second, food production must be secured for the next season and marketing channels must remain open. Ample food supply depends on whether farmers have access to inputs (seeds, feed for livestock and fisheries, fertilizers and pesticides) and labor before the season begins. Disruptions in road transport and shipping, restrictions on people's movement (including migrant workers), lockdown of cities and quarantine measures will have a significant impact on agricultural production if the right arrangements are not in place.

China has created some "green channels" and gives incentives to ensure key inputs are delivered to farms to ensure optimum agricultural production and fresh food supply.

It is also important to make sure all the components of the food supply chain including transportation, processing, wholesale and retail function effectively. Modern technologies such as ICT, online platforms and delivery services can greatly enhance efficiency while helping maintain social distancing.

Those most vulnerable need the most protection

Third, those most at risk of food insecurity need the most protection. Lower-income families spend a large percentage of their income on food, which means a sudden loss of income, breakdown of regular food support systems and/or price hikes will have disastrous consequences for vulnerable communities, reducing their resilience to fight against viruses such as the novel coronavirus and increasing the loss of life and risk of disease outbreaks. So governments should extend the social safety nets, and other stakeholders must mobilize the necessary resources to make sure everyone has access to enough nutritious food.

And where safety nets or other support mechanisms are not in place, public health interventions must be calibrated to protect the extremely poor. Free school meals, food distribution systems and food banks in some countries play a vital role in food security, so ways must be found to make sure those dependent on such programs and initiatives continue to receive food support.

And fourth, the government also needs to increase public spending and issue proactive policies that prioritize health, food and food production. The pandemic is changing spending patterns as investments in healthcare systems emerges, as a top priority worldwide to enable authorities to better respond to an epidemic. Hence, the authorities should urgently introduce emergency support measures to make certain that even the most vulnerable sections of society have access to food.

A global call for collaboration

The authorities should also take measures to facilitate the smooth flow of global trade and use of the international market as a vital tool to secure food supply. And international organizations such as the World Trade Organization, FAO, World Bank and the IMF must ask countries to not use the novel coronavirus pandemic as an excuse to implement trade protectionist policies.

Moreover, United Nations institutions, multilateral development banks, donors and civil society must step up and contribute financial and other resources in bulk to support countries that lack the resources to aptly respond to a crisis. And such support should be aimed at boosting those countries' healthcare systems and making their food systems more resilient so they can prevent a food security crisis from snowballing into a bigger humanitarian disaster.

The author is chair professor at China Agricultural University.