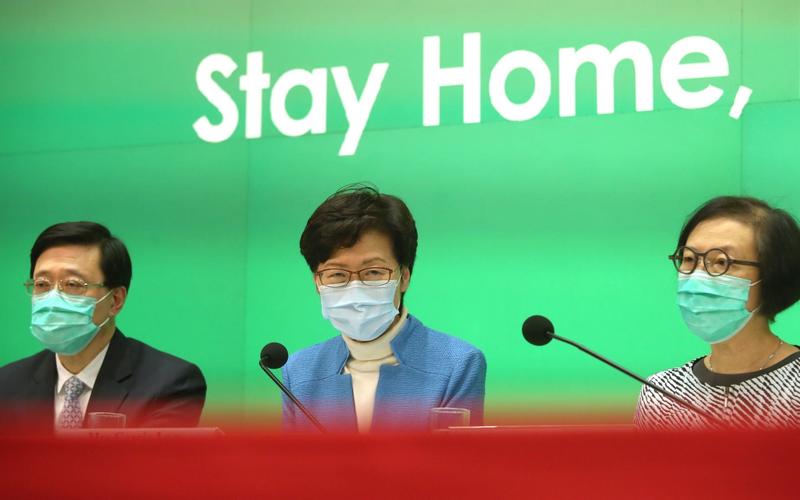 HONG KONG-Hong Kong is to impose a 14-day ban on public gatherings of more than four people from Sunday, along with the closure of all public entertainment venues and restrictions on the operations of bars and restaurants from Saturday, as part of additional efforts to curb the spread of the coronavirus.

The measures, introduced under the Prevention and Control of Disease Regulation, are among the toughest in the city’s fight against the novel coronavirus so far. Offenders face six months’ imprisonment and fines ranging from HK$2,000 (US$258) to a maximum of HK$50,000.

Chief Executive Carrie Lam Cheng Yuet-ngor announced the measures on Friday as the city recorded the biggest single-day jump in the number of infections the same day, with 65 confirmed cases. About one-third of them were linked to bars and eateries in the Lan Kwai Fong entertainment district in Central, Wan Chai and Tsim Sha Tsui.

The latest infections took the local tally to 518 — an almost threefold increase in the past two weeks.

The ban on gatherings of more than four people in public, both indoors and outdoors, however, will not apply to public transport, places of work, government and legislative meetings, funerals and wedding ceremonies.

Starting from 6 pm on Saturday, entertainment venues, including gyms, cinemas, game centers, party rooms, bathhouses and playgrounds will be ordered to shut down.

Restaurants and bars in the city are required to enforce restrictions for dine-in services. Only half of the seats of a restaurant or a bar will be made available to customers at any one time, while a maximum of four people will be allowed to be seated at each table, which should be at least 1.5 meters apart.

Customers are also required to wear a mask at all times, except when eating. They will also have their body temperatures taken before entering, and restaurants are required to provide hand sanitizers for customers.

All the measures will be enforced for two weeks, and will be extended for another 14 days if necessary.

Lam pledged subsidies for restaurants to cover their losses from the tough measures, but on the condition that they don’t lay off staff.

The Agriculture, Fisheries and Conservation Department has also decided to close down all country park barbecue sites and camp sites for 14 days starting from 6 pm on Saturday.

Lam said the measures, endorsed by the Executive Council, are based on the consensus that the most important task right now is to enhance social distancing; and that the government will no longer go ahead with a ban on the sale of alcohol as originally planned.

Stressing that the situation remains worrying, she called on the community to unite in the fight against the virus and refrain from going out unless absolutely necessary.

At the same press conference, Secretary for Food and Health Sophia Chan Siu-chee said the government has started testing all asymptomatic arrivals at the airport, and plans to make it mandatory for all people visiting the city, regardless of which port of entry they use.

Among the 65 new confirmed cases on Friday, 41 were related to recent overseas travel, while 21 infections were linked to bars in Lan Kwai Fong, Wan Chai and Tsim Sha Tsui. So far, 45 patients have been linked to a cluster of band performers, bar employees and customers in the entertainment districts, making it the largest single infection cluster to date.

Chuang Shuk-kwan, head of the Communicable Disease Branch at the Centre for Health Protection of the Department of Health, said although the city saw a record-high daily increase in new cases, more than half of them were returnees from overseas, while the majority of the others were associated with the bar cluster.