By Shadow Li and He Shusi 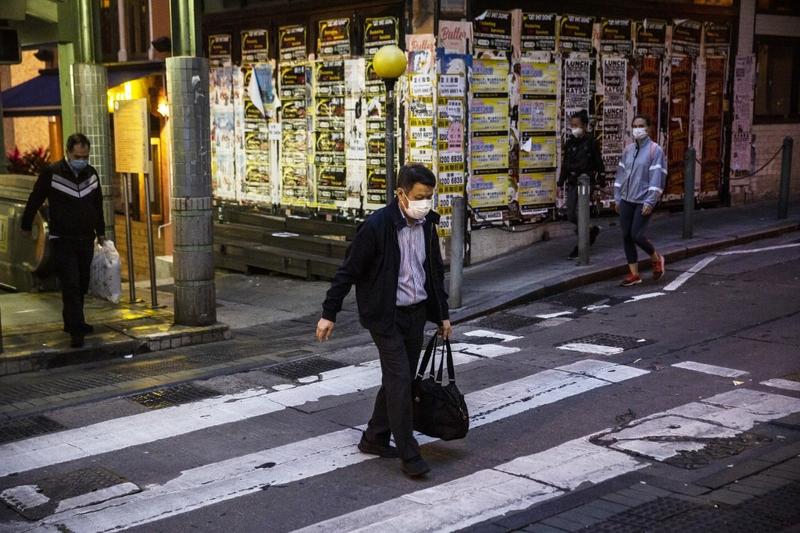 Pedestrians wearing facemasks amid concerns over the spread of the novel coronavirus, walk through a road in the Central district of Hong Kong on March 21, 2020. (ISAAC LAWRENCE / AFP)

The 27 men and 28 women are aged 12 to 71. Forty-one of them had traveled overseas during the incubation period, including 14 students.

Among the 24 patients without recent travel history, 21 were linked to bars and bands performing in Lan Kwai Fong and Tsim Sha Tsui.

Among the 24 patients without recent travel history, 21 were linked to bars and bands performing in Lan Kwai Fong and Tsim Sha Tsui

So far, a total of 45 patients were linked to this cluster, making it the biggest cluster in the city since the epidemic started in January. Among them, 27 are performers, bartenders, or staff at bars and 16 are customers.

Head of the Communicable Disease Branch of the Centre for Health Protection of the Department of Health, Chuang Shuk-kwan, said at a press briefing that although the city saw a record-high daily increase in new cases, more than half of them were returnees from overseas, while the majority of the others was linked to the bar cluster.

All but one or two patients had epidemiological links and were traceable, Chuang stressed. For that reason, the situation was not so different from that of the last few days, and therefore should not be seen as an indication of community outbreak.

Meanwhile, one more patient has been discharged from hospital, increasing the number of recoveries to 111.

Fifty-seven percent of the city’s 1,012 isolation beds have been occupied, health authorities said.

Hospital Authority Chief Manager (Patient Safety and Risk Management) Sara Ho said the stock of N95 masks could last for only about one month.

In light of the worsening of the pandemic globally, the supply of such protective gear might not be sufficient, Ho said, adding that the authorities would consider trimming down non-essential medical services.

In other development, two nurses from Caritas Medical Centre in Western Kowloon who drew blood from a confirmed patient for testing have been regarded as close contacts, as the patient was not wearing a face mask and had coughed during the process.

The two nurses were both wearing face masks and medical gloves. One nurse did developed suspicious symptoms and has been isolated.

The Hospital Authority expressed concern about the incident, and called on all patients at hospitals to wear face masks. Otherwise, it would increase the risk of infecting other patients and medical workers, and would affect hospital operations, Ho said.