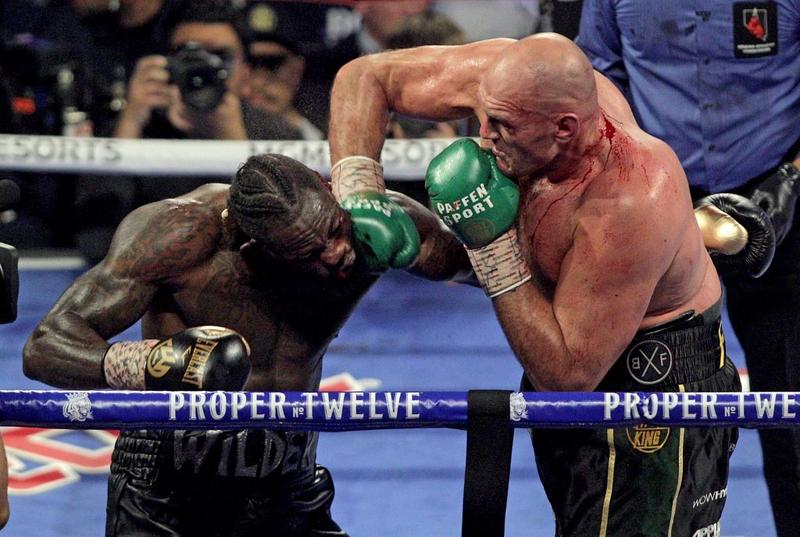 Britain’s Tyson Fury delivered a dominant performance in his heavyweight championship bout with Deontay Wilder on Saturday, overwhelming his opponent to earn a seventh round TKO victory in Las Vegas.

In the highly-anticipated super fight rematch between the two titans, Fury took control late in the first round and never relinquished it, knocking down Wilder twice and bloodying him en route to the referee stopping the fight in the seventh where Wilder’s corner threw in the towel.

“I must say the king has returned to the top of the throne,” Fury told reporters in a post-fight interview.

Fury used his reach advantage to continually beat Wilder to the punch. He took total control in the third where he landed a right hand to Wilder’s left ear to drop him to the canvas.

Wilder never regained his legs or footing after that, wobbling through the rest of the match.

ALSO READ: Wilder, Fury engage in war of words ahead of rematch

Fury again dropped Wilder in the fifth with a body punch and then caught him in the corner with a flurry of punches in the seventh where it ended.

“I want to say (Wilder) came in and he manned up and really did show the heart of the champion,” Fury said. “He is a warrior, he will be back, and he will be the champion again.”

Fury (30-0-1) retained his lineal crown and now takes the WBC crown from Wilder (42-1-1) and settles the score between the two. The first fight between the boxers in December of 2018 was called a draw.

Wilder, known for his violent right-hand knockouts, never got the chance to truly unleash his power.

He landed a few overhand right hands early in the fight but was constantly under attack.

“Things like this happen, the best man won tonight,” Wilder said. “My side threw the towel – I would rather go out on my shield.

“Even the greatest have lost and came back, you take it for what it is. This is what big time boxing is all about. The best must fight the best.”

One of the most anticipated heavyweight fights in years, the event started with plenty of pageantry.

READ MORE: Fury back in boxing to 'inspire others,' win belts back

Former champions Lennox Lewis, Evander Holyfield and Mike Tyson were all introduced in the ring.

Fury made his way to the ring while sitting on a throne. Wilder was dressed in full dark armor and helmet.

Fury punctuated his win with another vocal performance, singing Don McLean’s “American Pie” to the crowd.