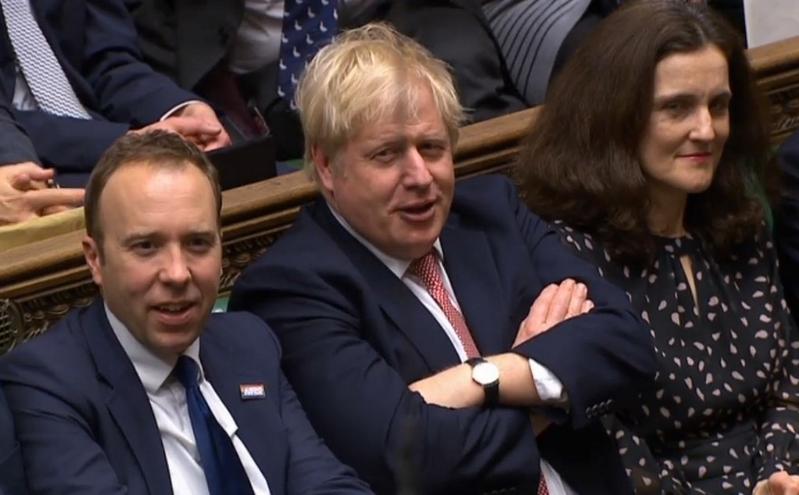 This video grab from footage broadcast by the UK Parliament's Parliamentary Recording Unit (PRU) shows Britain's Prime Minister Boris Johnson (center) reacting after his government won the vote on the third reading of the European Union (Withdrawal Agreement) Bill, in the House of Commons in London on Jan 9, 2020. (HANDOUT / PRU / AFP)

British Prime Minister Boris Johnson’s Brexit legislation cleared its final hurdle in the House of Commons, putting an end to the parliamentary gridlock that cost his predecessor Theresa May her job.

Members of Parliament voted 330 to 231 in favor of the Withdrawal Agreement Bill, which now passes to the upper House of Lords

Members of Parliament voted 330 to 231 in favor of the Withdrawal Agreement Bill, which now passes to the upper House of Lords. Johnson wants the measures passed into law before the end of the month so the UK can leave the European Union on Jan 31 and he can deliver on his election campaign promise to “get Brexit done.”

ALSO READ: Tough road ahead for Johnson in year of Brexit

“It is my sincere hope that their lordships will now give due regard to the clear majorities we have seen during the committee stage and establish their endorsement of this bill in a similar, timely, fashion,” Brexit Secretary Steve Barclay told lawmakers. “This bill will secure our departure from the European union with a deal that gives certainty to businesses, protects the rights of our citizens and ensures that we regain control of our money, our borders, our laws and our trade policy.”

The smooth passage of the bill illustrates the dramatic shift in the political landscape since May first tried to get her Brexit deal through Parliament a year ago. The UK’s split from the bloc this month is now virtually a formality, and attention is already turning toward negotiations on the future relationship. Johnson wants to broker a Canada-style trade deal by the end of 2020, something the EU Commission says is impossible.

After Johnson stormed to an 80-seat majority in the Dec 12 election, he stripped out a series of concessions May had made to opposition lawmakers, including guarantees on workers’ rights and the environment, measures to protect child refugees, and giving Parliament a say over the next stage of negotiations.

Opposition Members of Parliament tried — and failed — to reinsert some of those measures during debates in the House of Commons. Opposition amendments are more likely to pass in the House of Lords, the unelected chamber where the government doesn’t have a majority, but the Commons can strip them out again. In such circumstances, the Lords traditionally bows to the will of the elected chamber.