After #MeToo, in Germany comes #MeTwo 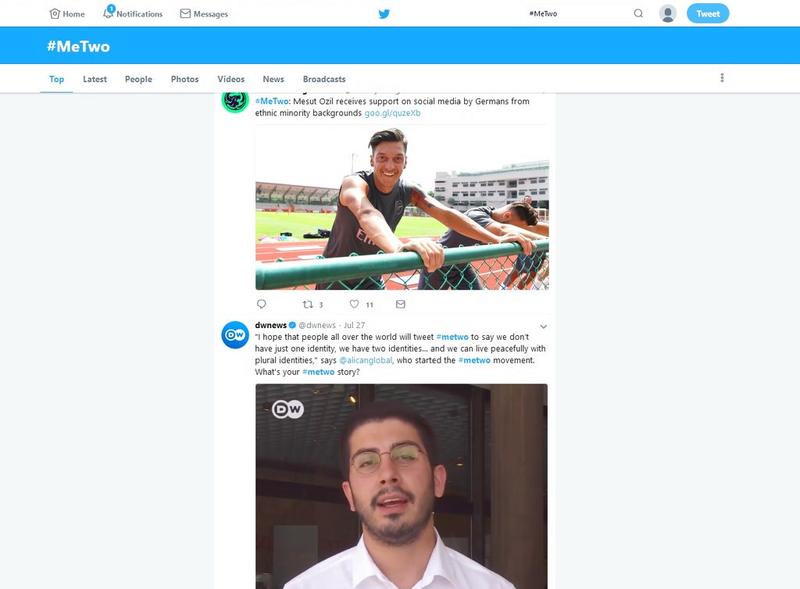 This July 30, 2018 screenshot shows the #MeTwo Twitter website. The hashtag, a play on the #MeToo movement against sexual harassment, was created by journalist Ali Can following the resignation of soccer star Mesut Ozil. (PHOTO / AP)

The hashtag has become a rallying point for scores of second- and third-generation immigrants in Germany, who have taken to Twitter to share their accounts of everyday racism and how they still struggle to be accepted as Germans.

Ozil, the son of Turkish immigrants, quit earlier this month after fierce criticism of his decision to pose for a picture with Turkish President Recep Tayyip Erdogan. In reaction, Ozil attacked the German soccer federation, its president, fans and the media, criticizing what he said was racism and double standards in the treatment of people with Turkish roots. "I am German when we win, but I am an immigrant when we lose," he said.The hashtag, which echoes the #MeToo movement against sexual harassment, was created by Ali Can, a 24-year-old journalist of Turkish descent, following the furor over Turkish-German soccer star Mesut Ozil's recent resignation from the German national team.

Can used the #MeTwo hashtag because he wanted to show that ethnic minorities in Germany often feel connected to two cultures or places at the same time: Germany and the country of their or their ancestors' origin. By Monday, some 153,000 tweets recounting instances of discrimination had been posted to Twitter, according to the German news agency dpa.

Germany is home to more than 4 million people of Turkish origin, who were invited in the 1960s to help rebuild the country after World War II.

The debate also reflects divisions in Germany over the recent influx of many Muslim asylum-seekers. Since 2015, more than 1 million migrants, mostly from war-torn countries like Syria, Iraq and Afghanistan, have come to Germany.

A backlash has helped fuel the rise of the anti-migrant and nationalist Alternative for Germany party, or AfD, which won seats in the German parliament for the first time last year.

All in all, about 20 percent of the more than 82 million people living in Germany have immigrant roots.

"We need to redefine what it means to be German," Can, who kicked off the #MeTwo debate, told The Associated Press on Monday.

"No matter how much immigrants want to integrate into German society, they will not be able to do it on their own," he said. "Everyone here needs to help with integration."

Among the #MeTwo tweets, many complained about discrimination based on skin color or wearing a headscarf. Others denounced some ethnic Germans' assumption that even third-generation immigrant children do not fully belong as "Germans."

Twitter user Moorni recounted her school experience: "Despite good grades no recommendation for comprehensive secondary school. Quote class teacher: Your daughter will anyway wear a hijab and get married early."

Abeneezer Negussie tweeted, "When a stranger says to you after a nice conversation on a train, 'your skin color is not your fault, I mean, you unfortunately can't change it,' and you understand that he perceives your skin color as something that went wrong."

Some wrote that despite the pain and humiliation they have suffered through racism, the #MeTwo outcry had important and positive elements.

"The good thing about the racism debate 2018 is, that migrants have finally joined the conversation," said Turkish-German author Hatice Akyun. "Our parents pretended they didn't understand and looked away in shame."

On Twitter, anti-migrant comments soon followed the #MeTwo movement. But some migrants also posted about their positive experiences in the country using the hashtag #MyGermanDream.

Germany's Foreign Minister Heiko Maas chipped in as well, writing Sunday on Twitter: "It is damaging the image of Germany if there's the impression that racism is socially acceptable again. We cannot allow that people with migrant roots feel threatened. Together, we have to stand up decisively for diversity and tolerance."