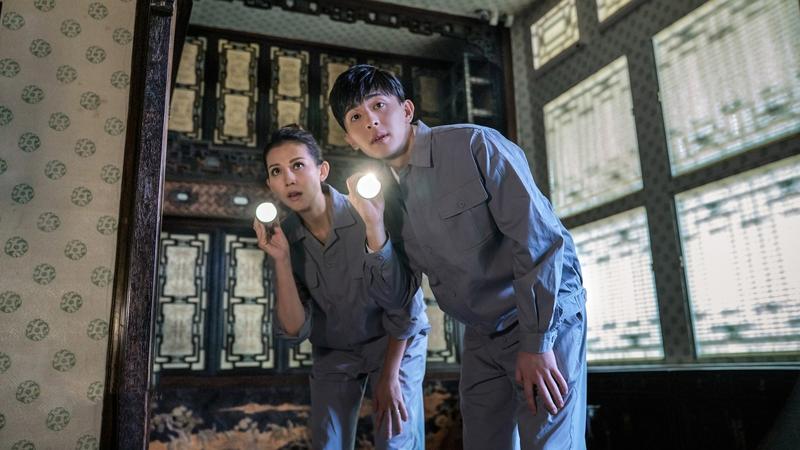 Ada Choi (L) and actor Deng Lun (R) are among celebrities guiding audiences to explore secrets in the Forbidden City in an ongoing variety show. (PHOTO PROVIDED TO CHINA DAILY)

The Palace Museum in Beijing, also known as the Forbidden City, is a much-visited and much-photographed landmark. This 598-year-old former Chinese imperial palace complex, received almost 16.7 million visits in 2017. Numerous TV programs - documentaries and dramas - have showcased the place in recent years.

However it still has secrets, and a new production is set to reveal those unknown areas and the legends within.

That first episode won wide acceptance from audiences, and it rated 8.3 out of a total 10 points on Douban.com, China's major film and TV critic website.

"It brings many elements together, but everything in the show is perfectly matched," says a netizen on Douban.

"It made me recall the thrill I felt when I stepped into the Palace Museum for the first time."

The program itself is difficult to categorize into an existing format.

In each one-hour-long episode, the actors switch between playing guides and historical figures like emperors and royal family members of the Qing Dynasty (1644-1911). They focus on areas still not accessible to the public and the legends surrounding them.

In the show, the actors are also joined by designers who will create products based on what they see. The most popular ones, based on an online vote, are to be turned into souvenirs for sale.

Shan Jixiang, the director of the Palace Museum in Beijing, shows a recent cultural creativity product of the museum, a book for readers to solve puzzles with online interaction. (ZOU HONG / CHINA DAILY)

No previous variety show has been shot in the palace complex like this.

As for cinema, there have been rare exceptions like the Academy Award-winning The Last Emperor.

For the variety show, the Palace Museum has taken the reins of the production for the first time. Zhu Yong, a veteran history researcher at the museum - who is also the head of the film and TV department at Gugong Academy, a research institute affiliated to the Palace Museum - is the chief screenwriter for the show.

Speaking about his new role, Zhu says he understands that it is not an easy job.

"It's complicated work to get so many different departments in our museum all geared up," he says.

"Six centuries of history is not easy to digest, but we have to think of ways to make it accessible to young audiences."

Actor Zhou Yiwei, who is known for his characters in historical productions, has a long monologue in the show as Emperor Qianlong who reigned from 1736 to 1795.

The emperor was a monarch who held ultimate power, but was chained by rituals and his high position. He was also a literati who looked for freedom and was obsessed with the Jiangnan area (a region by the southern bank of the lower Yangtze River).

Fans of Qing-court dramas also have something to look forward to as the show features Hong Kong actress Ada Choi and her mainland counterparts, Qin Lan and Ning Jing, all of whom once played the role of Qing empresses for various popular TV series.

Among the places featured are the Juanqinzhai (the studio of Exhaustion after Diligent Service), an exquisite garden complex built for Emperor Qianlong, which is still not open to the general public.

As of now, about 20 percent of the Palace Museum is still not accessible to the public, but that is a far cry from 2014, when nearly half of the complex was out of bounds for general visitors.

Director Mao Jia says: "Many areas have been opened up in recent years which leaves less room for us to work. So, on many occasions we have to find new stories."

Revealing details about the show, she says an upcoming episode will focus on Emperor Kangxi (1662-1722) in which he will be portrayed as a big fan of Western machinery and medicine.

"The episode will focus on a spot where the emperor once conducted an experiment."

Despite the entertainment aspect of the show, Zhu says his priority is to give viewers a correct understanding of history.

"Many historical dramas based on the Forbidden City are hits," he says. "But they also make people believe that their fictional stories are real history. Now, since we are making a show in the palace, we have to ensure that everything we do is accurate."

One of the advantages that the show's makers have is that it has a huge collection of cultural relics which can be used as reference material. The downside is that there are too many of them, about 1.86 million items in total.

Mao says: "I don't feel I am making a variety show. I feel I am preparing for academic research projects, as all the costumes, props and makeup styles have to follow historical records."

This is why, Mao says, the costumes in the variety show may seem different to viewers who are used to watching history-based TV dramas.

Speaking about the moment when she first saw the clothes worn by Emperor Qianlong in everyday life, Mao says: "Frankly, my response was: Isn't this something worn by a eunuch?

"How could the outfits be so plain-looking? But it is history. Only a red decoration on the top of the emperor's hat revealed his identity."

Emperors did not wear shiny robes all the time, and neither did the empresses and the concubines. Their flamboyant robes and shoes, which are commonly seen in TV series now, were not commonplace. Elaborate styles only appeared in the late 19th century.

During the filming process no actor was allowed to touch the cultural relics.

For a scene where Qianlong sits on his throne in Juanqinzhai, the crew had to create an identical replica of the original for the actor to use.

It is hoped that the show might make the grandiose 720,000-sq-meter palace complex in heart of Beijing feel more accessible to the public.

"People think that the Palace Museum is very big and remote," says Leng Song, a media researcher at the Chinese Academy of Social Sciences.

"The program which showcases new facets of the palace complex's aesthetics could help change that with its unique treatment."

"A cultural program needs taste, but it cannot be a cold fish," says Leng.

"A blend of docudrama and reality show techniques can sustain the interest of the public, and producing souvenirs will make the show's influence on the cultural sector even stronger."

The show is crucial to the plans of Shan Jixiang, 64, the director of the Palace Museum, who is determined to make the museum a part of people's everyday lives.

Souvenirs developed from the abundant cultural treasures in the museum is another part of the plan.

Besides the designers featured in the show, students from top Chinese fine art academies are also being given access to cultural relics appearing in the show, in the form of pictures and background information. They are expected to come up with ideas which can ultimately be turned into souvenirs.

"Our ultimate goal is to enlighten people through these souvenirs," says Shan. "More ways are needed to better connect culture and the market."

According to Shan, the Palace Museum had 10,500 types of cultural souvenirs as of 2017.

"This number is big enough," he says. "Now it's the time to focus more on how to create new themes and improve quality."

As the series is scheduled to have many seasons, Shan says the director can also use the products as inspiration.

Despite his age, Shan's mind is buzzing with ideas.

For instance, when the show needed to find a host to connect the storyline, Shan suggested using a chubby cat speaking in a child's voice for the role. This idea has proved successful, going by feedback on the internet.

"We have 200 cats in our museum," says Shan. "Thanks to them there are no rats in the Forbidden City. So, why not have them on the show."