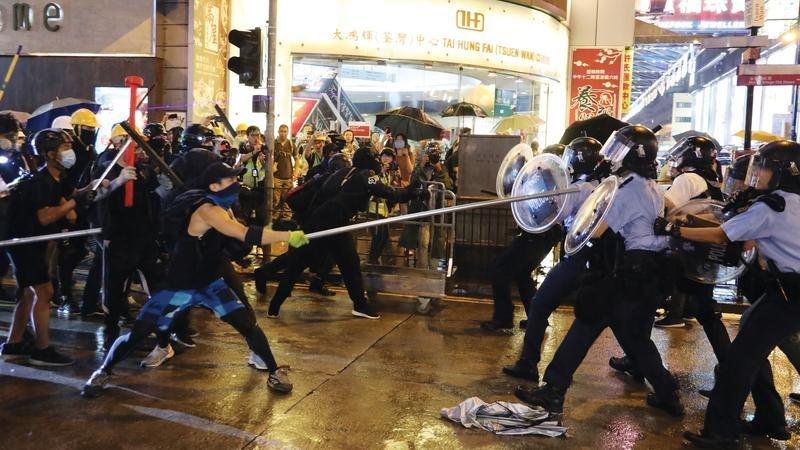 Experts and educators in Hong Kong hailed the Legislative Council's latest proposal to set up a task force to review the teaching materials and textbooks. They, however, cautioned it was not enough.

The Panel on Education of the lawmaking body of the Hong Kong Special Administrative Region passed a motion proposed by legislator Eunice Yung on Friday to set up a mechanism to monitor teaching materials. The newly formed group is expected to look into teaching materials and textbooks in schools - from kindergartens to secondary schools - and review the current practice of leaving textbooks at the liberty of teachers.

This is an attempt to keep biased or political content out of classrooms. The task force is expected to make appropriate suggestions to the city's education authority after reviewing the textbooks.

The proposal comes amid violent crimes committed by a number of young students during the anti-government protests, now entering the seventh month, with no end in sight.

Many educational professionals and parents have blamed the education system and teachers, saying flawed teaching materials have radicalized students.

Many educational professionals and parents have blamed the education system and teachers, saying flawed teaching materials have radicalized students

According to the Hong Kong Police, out of the more than 6,000 people arrested, 2,393 (40 percent) have been students. About 1,000 out of those arrested are teenage students from more than 300 out of Hong Kong's 400-plus secondary schools. The youngest among the arrested is a 12-year-old boy.

Legislator Horace Cheung Kwok-kwan said during the legislative debate on Friday he had received a lot of complaints from parents about the textbooks, especially politically inciting notes, prepared by teachers. He said the task force could help keep politics out of classrooms.

This is not to infringe on the (educational) professionals freedom in their political beliefs, but to prevent them from presenting students with a subjective and biased political stance, he said.

Tang Fei, principal of Heung To Secondary School, believed the move was "necessary".

According to him, it's difficult for the authorities to follow up on fragmented information on social media. He said an all-round review panel could monitor the situation as a whole and suggest remedies.

Echoing Tang, Hong Kong Federation of Education Workers President Wong Kwan-yu said the move will help plug loopholes in the current mechanism, since the city's education authority has failed to ensure quality of the textbooks, especially those relating to liberal studies.

Many legislators and education experts have said the academic curriculum has been hijacked by teachers with radical political views.

He said the liberal studies textbooks do not require approval of the educational authorities and teachers are free to use any materials they like.

The newly established task force may help address the problem, he said.

He said it can only list out problems and report to the authority. The Hong Kong Educational Bureau will decide whether or not to heed the task force's advice or take follow-up measures.

The LegCo agreed to set up the force, without giving details about its way of functioning.

It is still not known if the education panel would play a key role in standardizing teaching textbooks and materials, the expert said.

Meanwhile, some parents voiced their support to the new proposal.

Sinita Liu, the mother of a primary school student and a kindergarten child, said it shows that efforts are being made to fix the city's education system. "I'm glad that the legislative body will keep an eye on textbooks and materials used in classrooms."

"But they should also keep a check on some unprofessional teachers," she said.

Dawn Pang, the mother of two daughters studying in a primary school, said some teachers had "erred" when teaching students about the current affairs in Hong Kong. She cited some comments made by teachers in classes, discrediting the police as "bad guys".

She called upon the schools to build their own inspection teams.

"Not only teaching materials, but also the teachers need to be monitored," she said.

The Education Bureau has received not less than 123 complaints about misconduct by teachers, the majority of which are about hate speeches and acts of provocation. There have also been complaints about using inappropriate teaching materials.

About 80 teachers have been arrested for alleged criminal acts since the social unrest began in Hong Kong in mid-June, according to a statement issued on Thursday by the Education Bureau.