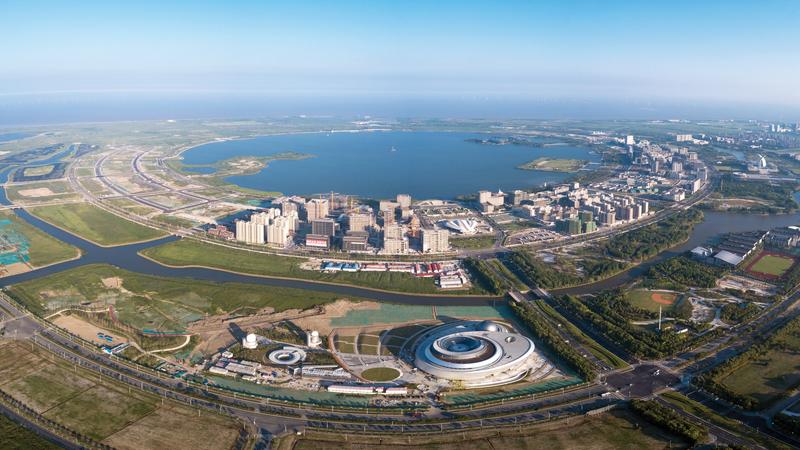 Lingang, in the southeast of Shanghai, was officially included in the China (Shanghai) Pilot Free Trade Zone on Aug 20, marking another major effort by the city to advance China’s new round of opening-up, which is now being carried out at a higher level and more extensively.

During his keynote speech at the first China International Import Expo in November, President Xi Jinping outlined three decisions on the development of Shanghai, one of which was the expansion of the Shanghai FTZ.

With the guideline for the integrated development of the Yangtze River Delta region released in early July and the technology-focused STAR Market launching trade on July 22, Shanghai has already implemented all three development decisions announced by Xi.

On Aug 6, the State Council, China’s Cabinet, unveiled a framework plan to include Lingang in the six-year-old Shanghai FTZ.

With a startup area covering 119.5 square kilometers, Lingang is set to grow into a special economic zone with strong global market influence and competitiveness by 2035.

Lingang Special Area marks the Shanghai FTZ’s second expansion project. The first took place in 2014 when the 28-sq-km area grew to 120 sq km by including more parts of Pudong district, where the Shanghai FTZ is located.

Minister of Commerce Zhong Shan said at the launch ceremony that Lingang will help to advance opening-up and facilitate the integrated development of the Yangtze River Delta region. It has also demonstrated China’s resolve to build itself into an all-round open economy, Zhong said.

Lingang is home to electric-car maker Tesla’s first “gigafactory” outside the United States. The total investment value of Shanghai’s largest foreign manufacturing project is set to reach 50 billion yuan (US$7.08 billion). The plant will help Tesla significantly lower its cost and prices, giving it more edge in market competition.

Tao Lin, global vice-president of Tesla, said the company obtained the first comprehensive qualification certificate on Aug 19, just three days after it applied for a qualification test and seven months after the plant broke ground. This reflects the high efficiency of the Lingang Special Area and the service quality of Shanghai officials, Tao said.

She added that the complete high-end manufacturing industrial chain in Lingang, the large number of modern industrial parks as well as the blueprint to include it in the Shanghai FTZ, will advance the development of tech companies like Tesla in China.

The constant support from the Chinese government “has helped Tesla to make its dream come true”, she said.

Chen Jie, deputy director of Lingang’s administrative committee, said it had received many inquiries from foreign consulates in Shanghai and foreign companies since Lingang’s framework development plan was released by the State Council in early August.

According to Chiu Tzu-Yin, the company’s CEO, Lingang’s geographic proximity to Zhangjiang — home to the largest cluster of semiconductor companies in China — will help to complete Shanghai’s semiconductor industrial chain by attracting companies specializing in design and equipment production, as well as raw material providers.

Yuan Baiwei, inspector of the Shanghai Municipal Finance Bureau, said the municipal government will launch a development fund within the year to support strategic industries in Lingang. The fund will provide more than 100 billion yuan of fiscal support in five years to nurture research and development, technology renovation and new products.

Talent policies are the highlight of the newly released measures, targeting professionals from home and abroad.

Specifically, the policies focus on talent who promise to continue working in the area for at least two more years after obtaining Shanghai residential licenses. They can then be granted Shanghai household registration within five years, instead of seven years previously.

For key talent in strategic industries, the period can be further shortened to three years.

Overseas students who work in Lingang can apply for the type B overseas residence permit with a maximum validity of 10 years. No work permit will be needed for such cases.

Overseas students, who were previously required to have at least two years of work experience in other markets before securing a job in Shanghai, can now work in Lingang right after graduation.

“Based on the basic rule of further opening-up, the newly introduced talent policies in Lingang have made a large number of breakthroughs. The ultimate goal is to let talent enjoy the services of the city as soon as possible,” said Yu Chengbin, deputy head of the Shanghai Municipal Human Resources and Social Security Bureau.

Sany Heavy Machinery has been operating in Lingang for a decade. During the first half of this year, the company’s total output increased 9 percent year-on-year to over 5 billion yuan. The company’s chairman Yu Hongfu said that Lingang’s inclusion in the Shanghai FTZ will increase Sany’s competitiveness in the global market.

“With the detailed policies of the Lingang Special Area released, the company will be substantially more attractive to overseas talents and experts, which will in turn make our products better known in the international market,” he said.

Sun Yuanxin, a professor of management and a researcher of free trade zones at Shanghai University of Finance and Economics, said Lingang will not only take the upper hand regarding the four key industries stated in the plan, but also will take the lead in the development of smart manufacturing, new electric vehicles and big data.

“Defining the newly included area as a special economic zone will encourage more emerging industry companies to settle down in Lingang and help Shanghai to achieve more results in strategically important industries, which is in line with the country’s development trajectory,” he said.

Lingang, the farthest southeastern part of east Shanghai’s Pudong district, has provided many manufacturing industry success stories since the municipal government started to build an industrial cluster in 2003. Artificial intelligence giants like Cambricon and SenseTime have set up operations in Lingang.

The Lingang administrative committee rolled out a plan in May 2018 to build a demonstration zone that will allow testing of driverless cars, boats and even planes.

“It is of the utmost importance now to enhance the country’s industrial competitiveness and move up to the top of the value chain. To that end, the improved capability in science and technology innovation is a must for a city and for the country generally,” he said.

Given the higher opening-up level to be seen from inclusion of the Lingang Special Area, Shanghai will be better able to attract high-end talent and other resources worldwide. This will boost Shanghai’s competitiveness and global cooperation, said Yin.