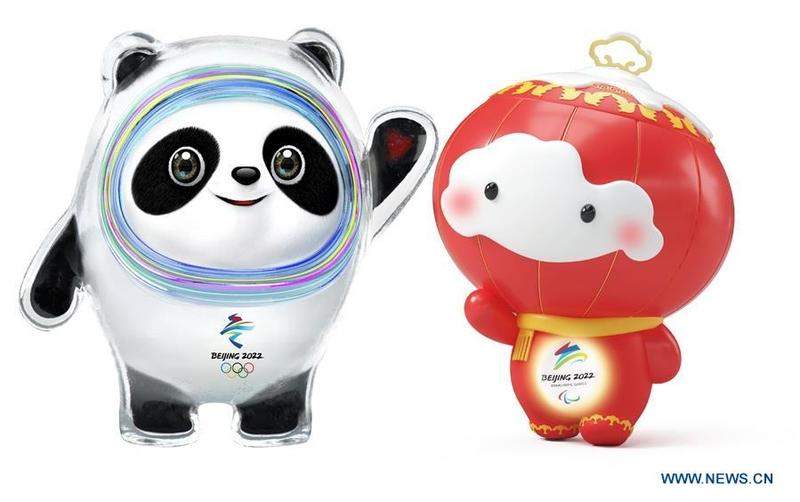 China unveiled the official mascots on Tuesday for the Beijing 2022 Winter Olympics and Winter Paralympic Games.

After months of anticipation and secrecy, the official mascot for the 2022 Winter Olympic Games－a giant panda-inspired cartoon character－made its public debut amid cheers at Beijing's Shougang Ice Hockey Arena.

Pandas combine China's traditional culture and its modern appearance together with winter sports elements in a compelling image that shows our great expectations for the Games and shows that we welcome the world.

The mascot was jointly unveiled by Vice-Premier Han Zheng, International Olympic Committee President Thomas Bach and Gou Zhongwen, executive president of the Beijing Organizing Committee for the 2022 Olympic and Paralympic Games, at a ceremony attended by 1,600 people at a training venue for the 2022 Winter Games.

Pandas are perhaps the most recognized animal species in China, organizers said.

"Pandas combine China's traditional culture and its modern appearance together with winter sports elements in a compelling image that shows our great expectations for the Games and shows that we welcome the world," said Beijing Mayor Chen Jining, who also serves as an executive president on the organizing committee.

One of the five mascots for the 2008 Beijing Summer Olympics was also a panda after Beijing selected the mammal for the first time since it represented the 1990 Asian Games.

"I have already seen the mascot and from what I've seen, it's a wonderful choice," Bach said before introducing the character.

"The mascot really incorporates the best elements and characteristics of China and the Chinese people. It will be a great ambassador for the country and the 2022 Winter Olympics." 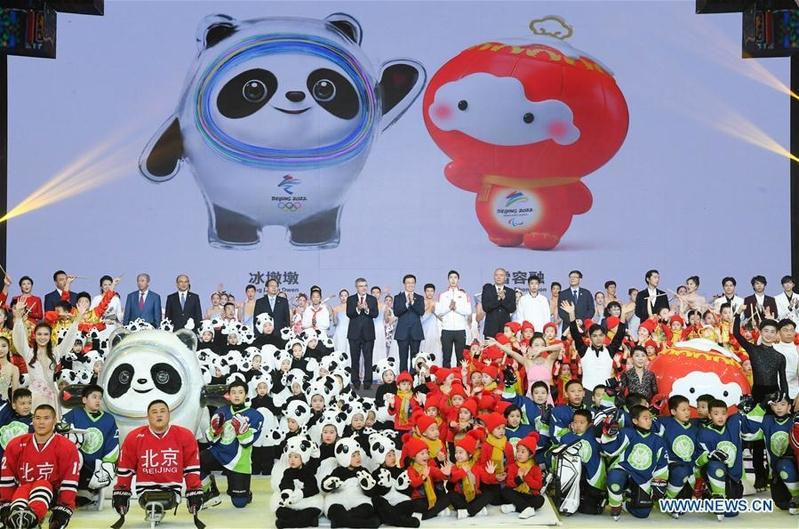 This Sept 17, 2019, photo shows officials and performers on stage during the launching ceremony of the two mascots for the 2022 Beijing Winter Olympic and Paralympic Games at Shougang Ice Hockey Arena in Beijing, capital of China, Sept 17, 2019. (SHEN HONG / XINHUA)

The halo surrounding the mascot's face is suggestive of ice and snow tracks, as well as the flowing "ribbons" on the exterior of the National Speed Skating Oval. The oval is one of two new competition venues in downtown Beijing expected to become a landmark of the Games, according to its chief designer Cao Xue, dean of school of visual communication at Guangzhou Academy of Fine Arts.

Shuey Rhon Rhon does not easily translate into English but contains characters for both "snow" and "forbearance".

Designed by a team from Jilin University of Arts, the lantern mascot emanates a glow from its heart that symbolizes warmth, friendship and the resilience of disabled athletes.

This demonstrates that the legacy of the 2022 Winter Olympics spreading the joy and benefit of winter sports to all Chinese people is already taking shape. The launch today will generate more excitement for that mission.

The vivid red image is a perfect fit for the gala event, especially as the Games will coincide with China's Lunar New Year celebration in February and March 2022.

"The mascot Shuey Rhon Rhon will become the face of the Beijing 2022 Winter Paralympic Games, lighting up the lives of billions around the world who will watch in awe as paralympic athletes inspire and excite the world," International Paralympic Committee President Andrew Parsons said in a video message.

The unveiling of the mascots marks the culmination of a journey that began in August 2018, when Beijing organizers launched a global design competition for the mascots.

A total of 5,816 submissions were received from 35 countries, and were reviewed by Chinese and international experts in a comprehensive evaluation and selection process.

The two new mascots will serve as spirited symbols of the Games that will take place in the three zones of downtown Beijing, the suburban district of Yanqing and co-host city Zhangjiakou in surrounding Hebei province.

ALSO READ: IOC: Beijing 2022 delivery 'on time and in style'

Of the 13 competition and noncompetition venues in downtown Beijing, 11 are existing facilities from the 2008 Summer Games, setting an example of sustainability for future hosts. Solid post-Games utilization plans have also been made for mountain venues in Yanqing and Zhangjiakou as part of a plan to involve 300 million people in winter sports activities.

"This demonstrates that the legacy of the 2022 Winter Olympics spreading the joy and benefit of winter sports to all Chinese people is already taking shape. The launch today will generate more excitement for that mission," said Bach.