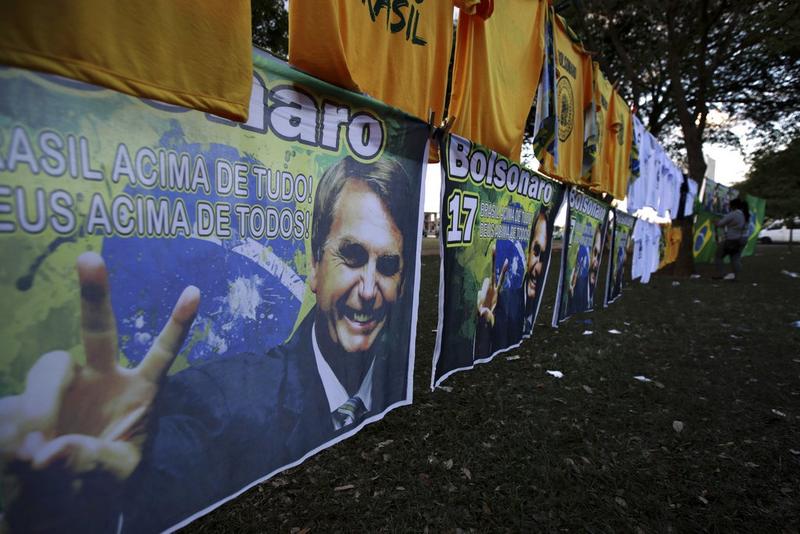 A woman sells T-shirts and flags with the image of the presidential frontrunner, Jair Bolsonaro, of the Social Liberal Party, in front of the headquarters of the national congress, in Brasilia, Brazil, Oct 7, 2018. (ERALDO PERES / AP)

RIO DE JANEIRO — The far-right former army captain who looks likely to become Brazil's next president promised nothing short of a complete overhaul of Latin America's largest nation, vowing Monday to combat the evils of corruption by gutting government ministries and privatizing state companies. He also pledged to promote traditional values that would roll back the rights of gays and other minorities.

With his pledge of "Brazil above all," Jair Bolsonaro has catapulted from the fringes of Congress, where he served as a member of marginal parties for 27 years, to a stone's throw from the presidency. A rabble rouser who has reminisced fondly about dictatorship and promised an all-out war on drugs and crime, he just missed outright victory in Sunday's vote and will face former Sao Paulo Mayor Fernando Haddad of the leftist Workers' Party in an Oct 28 runoff.

Bolsonaro only needs a few more points to secure victory, and Haddad's supporters vowed Monday to launch a tough fight to make up ground after their candidate finished a distant second.

The election was a seismic shift for this nation of more than 200 million people, where the left has won the past four elections but deep divisions have opened in the wake of a massive corruption scandal and the 2016 impeachment of then-President Dilma Rousseff. Brazil's move fits into a global trend among voters — in the United States and Europe, among other places — who are choosing anti-establishment and often far-right or populist candidates who target minorities and promise a return to "traditional values."

"The evils and damages of corruption hurt the people in many ways. It's they who don't have a bed in the hospital, who don't have security in the streets or money in their pockets," Bolsonaro tweeted Monday. "A corrupt government encourages crime in all spheres."

"Reduce the number of ministries, get rid of and privatize state companies, fight fraud in (a popular social welfare program for low-income families) ... decentralize power giving more economic force to the states and municipalities," he said on Twitter, one of his favorite forms of communicating.

Bolsonaro's Social and Liberal Party was a tiny, fringe group until the candidate began surging in the polls through his use of social media and carefully orchestrated rallies. Bolsonaro has often praised Donald Trump, and his campaign took many pages from the US president's playbook, from his echoing of Trump's "America First" slogan, to bashing the mainstream media to using the candidate's adult children as proxies.

Bolsonaro's party took a whopping 52 seats in the lower house of Congress — up from just one in the last election — giving it 10 percent of that house and making it the second-largest party after the Workers' Party, with 56.

If elected, Bolsonaro has promised a total overhaul of Brazil's government. The proposals that have attracted the most attention — and criticism — focus on how he would slash rising crime rates. Brazil has long been the world leader in homicides, with a record 63,880 people slain last year, according the Brazilian Public Security Forum, an independent think tank.

To this thorny problem, Bolsonaro has proposed simple solutions: Give police more freedom to shoot first and give ordinary people freer access to guns. Critics have expressed concern that police violence, already a major contributor to the high homicide rate, will only worsen if police are given carte blanche. 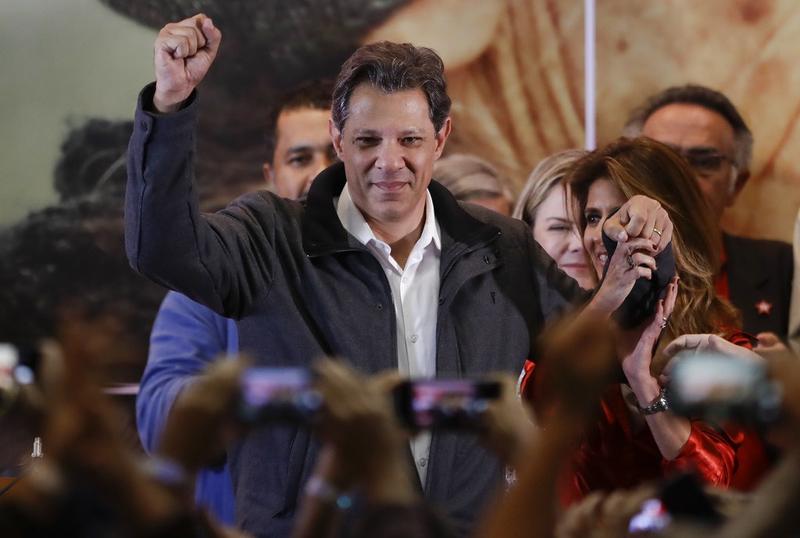 Brazil's presidential candidate for the Workers Party Fernando Haddadd, center, gestures to supporters after speaking about the results of the general elections, in Sao Paulo, Brazil, Oct 7, 2018. (ANDRE PENNER / AP)

While Brazilians say that deteriorating security is one of their major concerns, crime — and efforts to crack down on it — have become almost a metaphor in Bolsonaro's campaign. He has painted a Brazil not only at war with criminals but, in many ways, with itself.

Bolsonaro often uses crime as a lens through which to sketch out a broad indictment of the left: What he calls its coddling policies toward the poor, marginalized and criminal and its push to protect the rights of minorities at what he says is the expense of the majority.

He has vowed to end the designation of indigenous lands, saying such reserves impede development and give special privilege to native peoples that others don't get. His education policy calls for removing "premature sexualization" from schools, a nod to criticism from the right that "leftist ideas" like sex education have taken hold in the curriculum and morality is absent.

In an interview Monday with a friendly radio station, Bolsonaro indicated he would not change his hard-line views on issues like gay marriage. The constitution "recognizes the stable union between a man and a woman," he said, adding: "We can't think that gays can have super powers" to influence laws.

Many are concerned that his veneration of the armed forces, including his praise of the country's 1964-1985 dictatorship, signal that he will erode democratic values and rule with an authoritarian hand. He has said he will surround himself with former military officers, like his running mate who is a retired general.

In an interview late Monday with Brazil's most watched TV news program, Bolsonaro pledged to be "a slave of the constitution."

"My administration will have authority, not authoritarianism," he said. 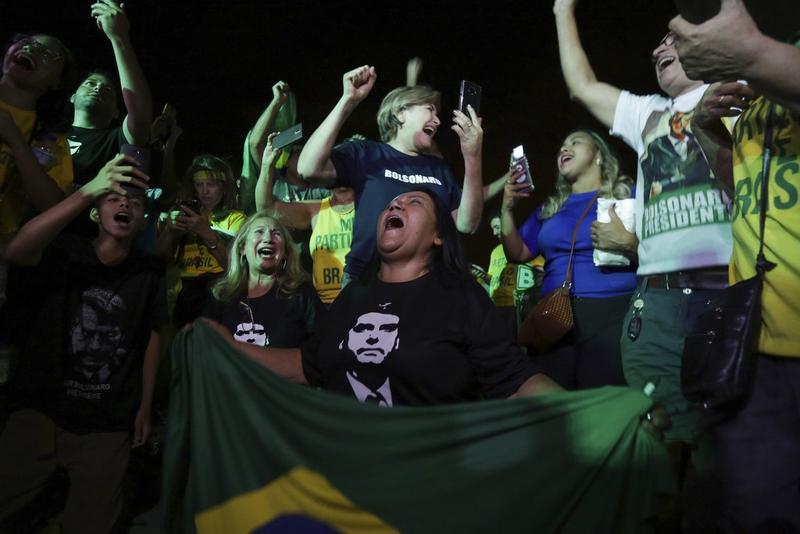 Supporter of presidential frontrunner, Jair Bolsonaro, of the Social Liberal Party, celebrate as they wait for the first results of the vote counting of the presidential elections, in front of the headquarters of the national congress, in Brasilia, Brazil, Oct 7, 2018. (ERALDO PERES / AP)

While Bolsonaro was expected to come out in front Sunday, he far outperformed predictions, blazing past competitors who had more financing, the institutional backing of traditional parties and much more free air time on television. His first-place finish with 46 percent of the vote — just short of the 50 percent-plus needed for an outright win — came after an unpredictable campaign in which the front-runner, former President Luiz Inacio da Silva, was barred from running after being jailed on a corruption conviction.

Supporters of Haddad, who got 29 percent of the vote, promised a tough fight Monday that included forcing Bolsonaro to engage in policy debates

Bolsonaro himself was stabbed and forced to campaign from a hospital bed for several weeks. But the attack allowed him to pick and choose his media appearances and largely speak to his supporters through social media. He will likely face much tougher scrutiny and questioning by reporters over the next three weeks.

Supporters of Haddad, who got 29 percent of the vote, promised a tough fight Monday that included forcing Bolsonaro to engage in policy debates.

Brazilians have a lot to be angry about. Since 2014, they've watched slack-jawed as prosecutors detailed how many in government manipulated public contracts and promised favors in exchange for billions of dollars in kickbacks and bribes. Much of that focused on the Workers' Party, and many voters cited a desire to root out corruption in their choice of Bolsonaro.

Brazil has also just emerged from a protracted recession, unemployment is high and crime is rising.

Haddad has leaned on a narrative of returning to better times: He promises to bring back the boom times Brazil experienced under his mentor, da Silva, and has portrayed an unequal society hijacked by an elite that can't bear to see the lives of poor people improve. He has promised to fight those inequalities, invest more in education and improve state services.

"Public security is a public service, to give guns to the population is to exempt the state from protecting citizens," Haddad told reporters Monday after he visited da Silva in jail.