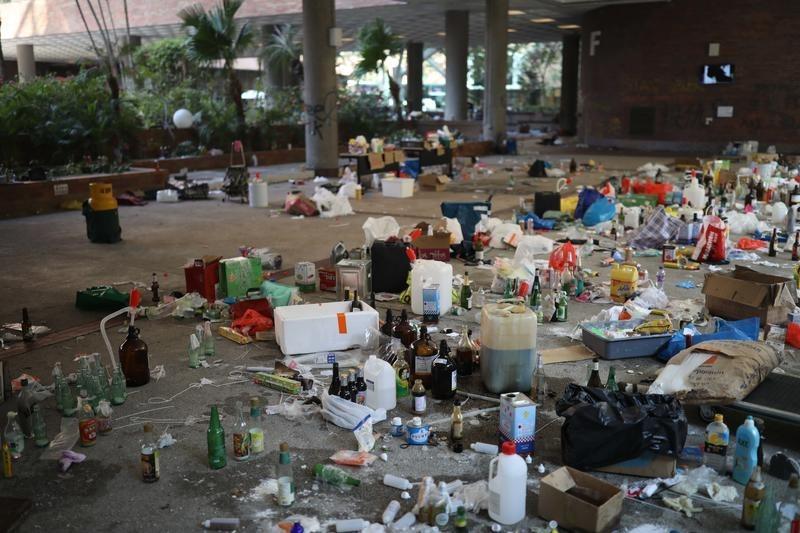 HONG KONG -- Shards of glass, empty bottles, charred chairs, smell of trash and buzzing flies make the campus barely recognizable. Only a red banner at the entrance which read "25th congregation, the Hong Kong Polytechnic University (PolyU)" reminds people that it was once an educational institute.

From Sunday afternoon, rioters gathering around PolyU have taken the campus as a stronghold to launch assaults on police officers, using lethal weapons including gasoline bombs, bows and arrows, metal balls and bricks.

From Sunday afternoon, rioters gathering around PolyU have taken the campus as a stronghold to launch assaults on police officers, using lethal weapons including gasoline bombs, bows and arrows, metal balls and bricks.

While most of the rioters have surrendered themselves, police believed that dozens are still hiding inside the buildings.

Before entering the site, police officers kindly reminded reporters to be careful. "They have weapons and they could shoot arrows from above," said an officer, pointing at the red-brick buildings. "They have shot a colleague of us in the calf."

But the first impression of the campus was dead silence.

Burnt bottles and chairs, broken umbrellas and helmets were scattered everywhere, while the blue dye on the ground, from water cannon of police, suggested that it was once a battlefield.

The medical service center has also been vandalized. Its glass door was broken and rubbish was left on chairs prepared for patients waiting for diagnosis.

A few steps inside the campus were barricades erected by rioters, several of which were built of bricks and cement presumably acquired from a nearby construction site, while a few others were made by piles of chairs, wooden boards or iron bars.

The dinning hall is a smelly place where decayed kitchen waste has attracted swarms of flies.

A laboratory is open. Police have warned on Facebook on Monday that "lots of dangerous chemicals were stolen." Together with the petrol bombs and explosives already owned by rioters, they could pose a threat to the public, police said.

Small groups of black-clad youngsters could be seen wandering in central areas of the campus. Some were carrying bags and some holding long iron sticks, staring vigilantly at strangers passing by.

During the standoff in the PolyU, police have been seeking peaceful resolutions by appealing to the rioters to surrender their weapons and leave the campus. They even broadcast Cantonese pop songs in an attempt to persuade them.

Hong Kong police said on Tuesday that some 1,100 people have been arrested for offenses including taking part in a riot and possession of offensive weapons. In the following days more were coming out of the campus.

There were also rioters who attempted to escape the blockaded campus. They abseiled from a bridge or used the sewage network.

Seeing a picture of an uncovered sewage well, a police liaison officer sounded anxious. "It would be very dangerous going inside," he said. "They could lose their lives by doing so. If such tragedies do happen, we police will be accused of 'killing' them again."

He referred to the bias by some Western media that accused police of their "brutality". Rioters also spread rumors that police killed protesters and harassed the female.

Outside the campus the world becomes noisy again. Several hundred meters away from the PolyU are high streets and shopping malls, where heavy traffic is typically Hong Kong-style in the Asian financial hub.

Decorations hanging over the streets carry the words "Merry Christmas." The year 2019 is coming to an end.