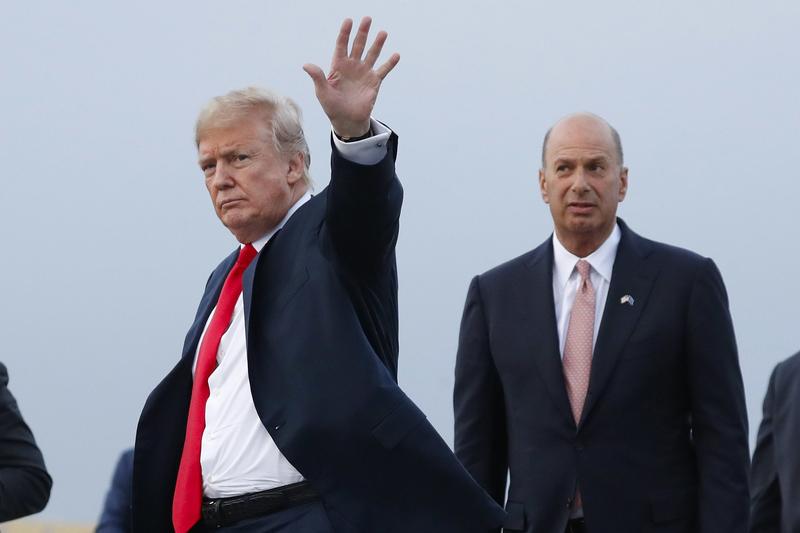 In this July 10, 2018, file photo, President Donald Trump is joined by Gordon Sondland, the US ambassador to the European Union, second from right, as he arrives at Melsbroek Air Base, in Brussels, Belgium. (PABLO MARTINEZ MONSIVAIS / AP)

WASHINGTON — Escalating his fight against Congress' impeachment inquiry, President Donald Trump flouted Democratic warnings about impeachable conduct Tuesday in blocking a US diplomat from testifying about Trump's dealings with Ukraine. House committee chairmen quickly issued a subpoena to force the envoy to appear before the House next week and produce documents recovered from his personal devices.

Gordon Sondland, the US European Union ambassador, was barred by the administration from appearing in a closed-door session with three House panels investigating Trump's entreaties to Ukraine. His attorney said Sondland, who had agreed to the interview without a subpoena, was "profoundly disappointed" to be prevented from testifying.

By preventing us from hearing from this witness and obtaining these documents, the president and secretary of state are taking actions that prevent us from getting the facts needed to protect the nation's security

Sondland was to have been asked about text messages released last week that show him and two other US diplomats acting as intermediaries as Trump urged Ukraine to investigate the 2016 US election and a gas company linked to Democrat Joe Biden's son. Sondland also spoke directly to Trump hours before sending a text message assuring another US envoy that there was nothing untoward about their plans, according to a person familiar with the exchange who spoke on condition of anonymity to discuss the conversation.

"By preventing us from hearing from this witness and obtaining these documents, the president and secretary of state are taking actions that prevent us from getting the facts needed to protect the nation's security," said Schiff, D-Calif. "For this impeachment inquiry we are determined to find answers."

House Speaker Nancy Pelosi echoed Schiff's comments at an event in Seattle, saying it was an "abuse of power" for Trump to thwart witness testimony.

Democrats believe that Sondland, who donated US$1 million to Trump's inaugural committee, could provide valuable information. He spoke to Trump in September as diplomats raised questions about why hundreds of millions in security aid to Ukraine was being withheld. After the call, Sondland assured another diplomat in a text message that there were "no quid pro quo's of any kind" with Ukraine.

Schiff, House Foreign Affairs Chairman Eliot Engel and House Oversight and Government Reform Chairman Elijah Cummings issued a subpoena late Tuesday demanding that Sondland testify Oct. 16 and provide documents, including additional communications on a personal device that he has turned over to the State Department. Schiff said the department is withholding those communications from Congress.

Sondland's absence on Tuesday raised questions about whether other witnesses called by the committee would appear. Marie Yovanovitch, the former US ambassador to Ukraine who was recalled from the post, is scheduled to testify Friday, and the committee has called two other State Department officials.

Trump indicated Tuesday that it was his decision to stop the deposition, tweeting that he would "love to send Ambassador Sondland" to testify, "but unfortunately he would be testifying before a totally compromised kangaroo court."

Democrats have struggled to investigate Trump and his administration all year as the White House has blocked and ignored subpoenas for documents and testimony. While the Democrats are already in court to force some of that evidence, they are making it clear that they do not intend to wait much longer. Articles of impeachment, including for obstruction, could be drafted by the end of the year.

Speaking to reporters Tuesday, Schiff laid out four parameters of the committee's investigation. He said the panel is probing whether Trump solicited foreign help from Ukraine for his 2020 reelection; whether a never-realized White House meeting between Ukrainian President Volodymyr Zelenskiy and Trump was conditioned on Ukraine conducting investigations; whether US military assistance to Ukraine was conditioned on those investigations; and whether the administration has obstructed justice.

Republican Rep. Jim Jordan of Ohio said Tuesday that Trump was simply "doing his job" to prevent corruption in Ukraine. He and other Republicans attacked Schiff for leading what they called an unfair, partisan inquiry.

Across the Capitol, Senate Judiciary Committee Lindsey Graham — one of Trump's staunchest defenders — said he would call the president's personal lawyer Rudy Giuliani to testify about corruption in Ukraine. Giuliani was communicating with Zelenskiy about the investigations that Trump wanted.

"Given the House of Representatives' behavior, it is time for the Senate to inquire about corruption and other improprieties involving Ukraine," Graham said in a tweet.

Giuliani said he was "very interested" in the invitation but would need to review matters of executive privilege and attorney-client privilege before committing to appear.

House Democrats have subpoenaed Giuliani for documents, but Giuliani said he would not cooperate with them.

Text messages released by House Democrats last week show Sondland worked with another of Trump's diplomats, former Ukrainian envoy Kurt Volker, to get Ukraine to agree to investigate any potential interference in the 2016 US election and to probe the Ukrainian energy company that appointed Biden's son Hunter to its board.

There has been no evidence of wrongdoing by Biden or his son.