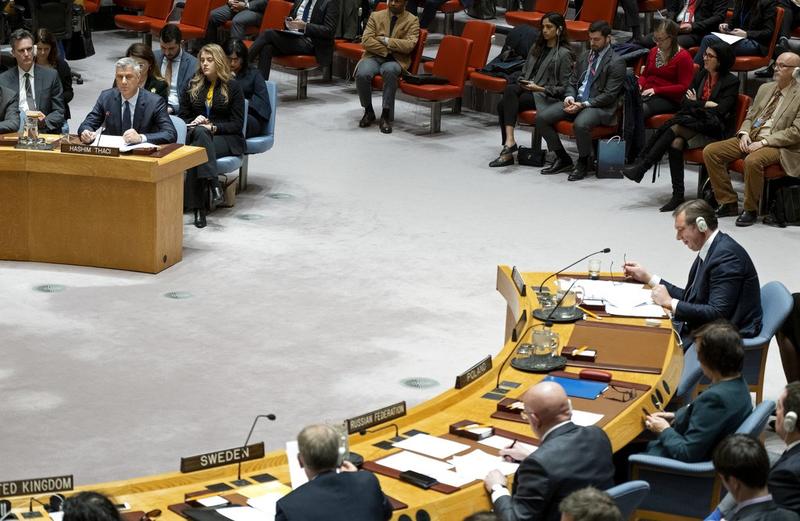 Kosovo president Hashim Thaci, upper left, speaks during a Security Council Meeting at United Nations headquarters, Dec 17, 2018, as Serbian President Aleksandar Vucic, end of row at right, and others listen. European Union members on the UN Security Council on Dec 18, 2018, reaffirmed their commitment to the internationally agreed parameters for a solution to the Israeli-Palestinian conflict. (CRAIG RUTTLE / AP)

UNITED NATIONS — European Union members on the UN Security Council on Tuesday reaffirmed their commitment to the internationally agreed parameters for a solution to the Israeli-Palestinian conflict.

"We ... would like to reiterate once more and emphasize the EU's strong continued commitment to the internationally agreed parameters for a just and lasting peace in the Middle East based on international law, relevant UN resolutions and previous agreements," said the countries in a statement.

The EU is truly convinced that the two-state solution based on the 1967 borders with Jerusalem as the capital of both states ... is the only viable and realistic way to end the conflict and achieve just and lasting peace

EU members on the UN Security Council said in a statement

Any peace plan that fails to recognize these internationally agreed parameters would risk being condemned to failure, reads the statement, in probable reference to a new Middle East peace plan yet to be unveiled by the US administration.

The statement was read to reporters by Karel van Oosterom, the Dutch ambassador to the United Nations, on behalf of the eight EU countries of Britain, France, the Netherlands, Sweden, Poland — the current EU members on the Security Council — and Belgium, Germany, and Italy.

Belgium and Germany will become council members next year. Italy split a two-year council term with the Netherlands.

The EU is truly convinced that the two-state solution based on the 1967 borders with Jerusalem as the capital of both states, which meets Israeli and Palestinian security needs and Palestinian aspirations for statehood and sovereignty, is the only viable and realistic way to end the conflict and achieve just and lasting peace, reads the statement.

The EU will continue to work toward that end with both parties, and its regional and international partners, according to the statement.

There is a pressing need for a political horizon to be restored. That is why the EU and its member states in past months have been so vocal in reconfirming their united, consolidated position in support for the two-state solution, with Jerusalem as the future capital of both states, reads the statement released before a Security Council meeting on the Palestinian question.

At the meeting, UN Special Coordinator for the Middle East Peace Process Nickolay Mladenov regretted the "weakening of international consensus" and the lack of progress on the Middle East peace process in 2018.

It is only by realizing the vision of two states living side-by-side in peace, security and mutual recognition, with Jerusalem as the capital of Israel and Palestine, and all final-status issues resolved permanently through negotiations, that the legitimate aspirations of both peoples can be achieved, he told the Security Council. 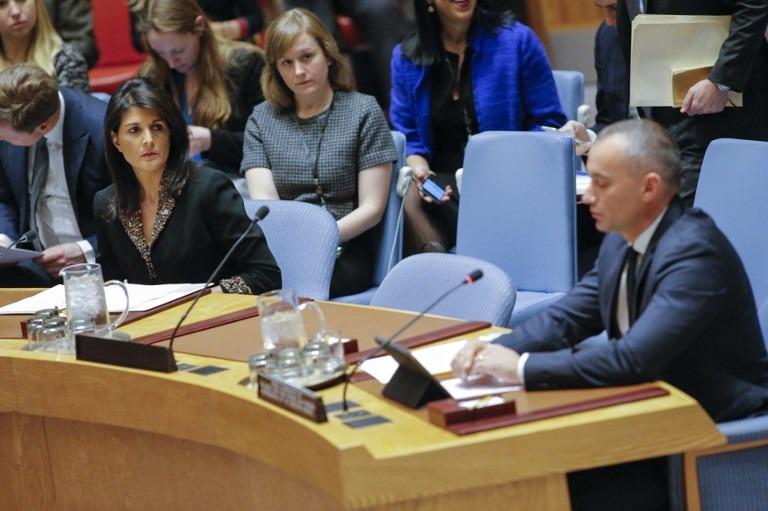 In this Dec 18, 2017 photo, US Ambassador to the UN Nikki Haley (left) looks at Nickolay Mladenov, UN Special Coordinator for the Middle East Peace Process, while he speaks at a UN Security Council meeting over the situation in the Middle East including Palestine at UN Headquarters in New York. (KENA BETANCUR / AFP)

Mladenov condemned the continued expansion of the Israeli settlement enterprise, which, he said, is illegal under international law, undermines hope among the population, trust between the parties, and the two-state solution itself.

Ongoing instances of incitement, provocative steps, and inflammatory rhetoric plague the public language of the conflict, he said. Over the past year, statements that encourage violence continued. Such rhetoric, particularly if it denies the right of existence of one of the sides, or their right to statehood, or glorifies terror, is dangerous and plays into the hands of extremists beyond Israel and Palestine, he warned.

Mladenov also expressed concern over violence in the West Bank in 2018, despite the fact that violence in Gaza caught more attention.

It is only by realizing the vision of two states living side-by-side in peace, security and mutual recognition, with Jerusalem as the capital of Israel and Palestine, and all final-status issues resolved permanently through negotiations, that the legitimate aspirations of both peoples can be achieved

He regretted the fact that this year has seen no affirmative steps by the parties to reverse negative trends nor serious progress on implementing important agreements signed in 2017, including on water, energy and telecommunications.

While there has been no progress on intra-Palestinian reconciliation, it is critical that this important Egyptian-led process continues, he stressed.

At the same Security Council meeting, US ambassador to the UN Nikki Haley talked about the Trump administration's new Middle East peace plan.

"Unlike previous attempts at addressing this conflict, this plan is not just a few pages, containing unspecific and unimaginative guidelines. It is much longer. It contains much more thoughtful detail. It brings new elements to the discussion, taking advantage of the new world of technology that we live in," she said.

Haley, who did not give details of the plan, said it contains both elements that the two parties like and dislike. She asked them to focus on the elements that they like and encourage negotiations to move forward.

"It is time we faced a hard truth: both sides would benefit greatly from a peace agreement, but the Palestinians would benefit more, and the Israelis would risk more," she said.

Speaking to reporters after the Security Council meeting, Permanent Observer of Palestine to the UN Riyad Mansour criticized Haley for hostility to the Palestinian people.

Haley was more aggressive, more pro-Israeli than previous US ambassadors, he said.

"Different representatives of the United States were always showing massive support to Israel. But yet in the same time, there was a bit more balance in terms of not ignoring the Palestinian side completely," said Mansour, who has seen many US ambassadors to the UN since he served the post in 2005.