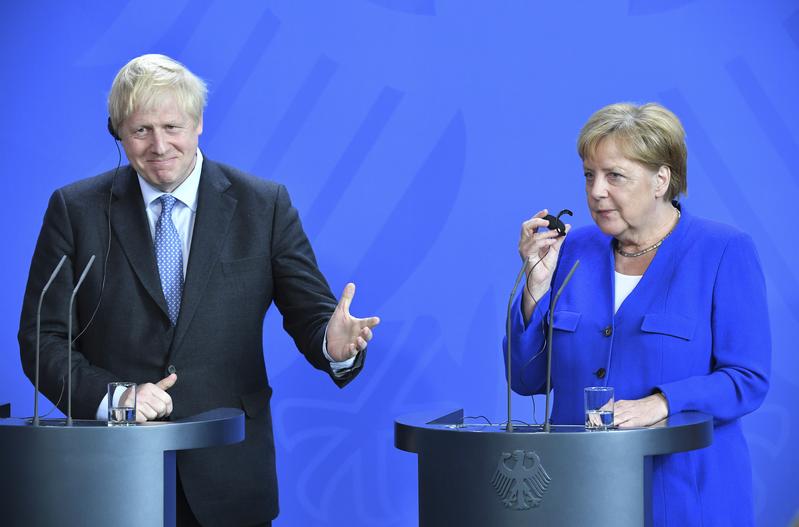 BERLIN — German Chancellor Angela Merkel on Wednesday challenged Britain to come up with alternatives to the Irish border backstop within 30 days, but French President Emmanuel Macron cautioned there would be no renegotiation of the Brexit deal.

More than three years after the United Kingdom voted to quit the European Union, it is still unclear on what terms - or indeed whether - the bloc's second largest economy will leave the club it joined in 1973.

British Prime Minister Boris Johnson, a Brexiteer who won the premiership a month ago, is betting that the threat of "no-deal" Brexit turmoil will convince Merkel and Macron that the EU should do a last-minute deal to suit his demands.

Speaking beside Merkel at the German Chancellery, Johnson repeatedly said that the Irish border backstop - which is a protocol of the Withdrawal Agreement struck by his predecessor Theresa May - needed to be removed in full.

"It was said we will probably find a solution in two years. But we could also find one in the next 30 days, why not?" Merkel, Europe's most powerful leader, said.

Johnson confirmed that she had given him 30 days to come up with alternatives and said there was ample scope for a deal. The two leaders had a constructive dinner of tuna, venison and chocolate tart, a British source said.

But just an hour after Merkel spoke, Macron said the demands made by Johnson for a renegotiation of the divorce deal, including the removal of the Irish backstop, were not workable as they currently stood. Johnson is due to meet Macron in Paris on Thursday.

Asked about the distance between the positions of London and the other 27 members of the EU, Johnson said: "If we approach this with sufficient patience and optimism, we can get this done. It's in the final furlong generally when the horses change places and the winning deal appears."

But with just over 10 weeks left until the scheduled departure, the EU has repeatedly said it will not renegotiate the Withdrawal Agreement and that it will stand behind member state Ireland.

As Johnson arrived, protesters outside the Chancellery gates shouted "Stop Brexit". Johnson and Merkel smiled and they joked about the British premier's German language skills.

Merkel has previously promised to discuss "practical solutions" to the Irish border insurance policy or "backstop" that Johnson says is unacceptable - but she has said the Withdrawal Agreement would not be reopened.

The German leader has suggested solving the Irish border riddle as part of the declaration on post-Brexit ties - a possible way to avoid a no-deal Brexit.

But France now believes no-deal Brexit is now the most likely Brexit scenario, said an official in Macron's office who cautioned that Berlin and Paris were united.

"Have no doubt that the French and German positions -- and elsewhere -- are the same. There's not the thickness of a cigarette paper between us," the French official said.

Once the nightmare scenario on the extreme edge of probability ranges, a 'no-deal' Brexit is now seen as a realistic possibility by both governments and investors.

Amid the political turmoil in London, little is clear. The alternatives are a delay, a last-minute deal, an election or even cancelling Brexit.

In Washington, US President Donald Trump, who has been enthusiastic about Brexit but critical of May's negotiating strategy, offered Britain help while criticising the EU.

"They have not treated the UK very well," he said. "That's a very tough bargain they are driving, the European Union. We are going to see if we can work something out."

But Macron said a no-deal Brexit would be of Britain's own making, adding that any trade deal London cut with Washington would not mitigate the cost of crashing out of the bloc.

"Can (the cost of a hard Brexit) be offset by the United States of America? No. And even if it were a strategic choice, it would be at the cost of an historic vassalisation of Britain," Macron said.

READ MORE: Govt source: Britain ready and willing to do a Brexit deal

Wrenching Britain out of the EU without a deal means there would be no arrangements to cover everything from post-Brexit pet passports to the trade arteries that pump capital, food and car parts between the two neighbours.

Many investors say a no-deal Brexit would send shock waves through the world economy, hurt the economies of Britain and the EU, roil financial markets and weaken London's position as the pre-eminent international financial centre.