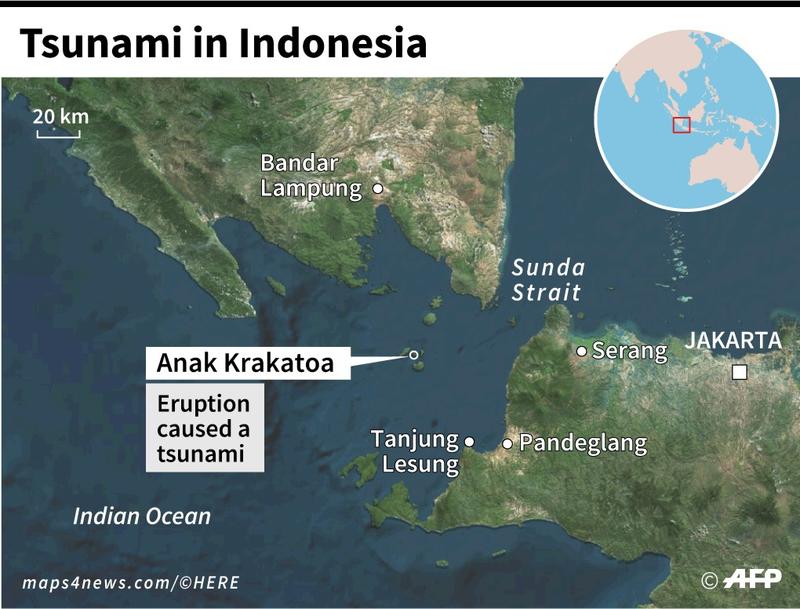 This AFP graphic shows a map locating the Anak Krakatoa volcano and the zone hit by a tsunami on Dec 22, 2018 in Indonesia.

WELLINGTON — A large chunk of the southern flank of the volcanic Anak Krakatau island may have slipped into the ocean just minutes before a tsunami hit an Indonesian shore, killing hundreds of people, scientists said on Monday.

At least 281 people were killed, more than 1,000 injured and numerous buildings were heavily damaged when the tsunami struck, almost without warning, along the rim of the Sunda Strait, between Java and Sumatra islands, late on Saturday.

Scientists said on Monday that the consensus, based on satellite images and the information available, was that the collapse of a portion of the volcano triggered the killer waves

The timing of the tsunami, over the Christmas holiday season, brought back memories of the Indian Ocean tsunami triggered by an earthquake on Dec 26, 2004, which killed 226,000 people in 14 countries, including more than 120,000 in Indonesia.

Scientists said on Monday that the consensus, based on satellite images and the information available, was that the collapse of a portion of the volcano triggered the killer waves.

Images captured by the European Space Agency's Sentinel-1 satellite showed that a large portion on the southern flank of the volcano slid off into the ocean.

"Underwater landside is the leading theory," said Sam Taylor-Offord, a seismologist at GNS Science in Wellington.

"So when that land pushes into the ocean ... it displaces the ocean surface causing the vertical displacement that causes the tsunami," he said, adding however that the lack of data and access made it impossible to ascertain this theory. 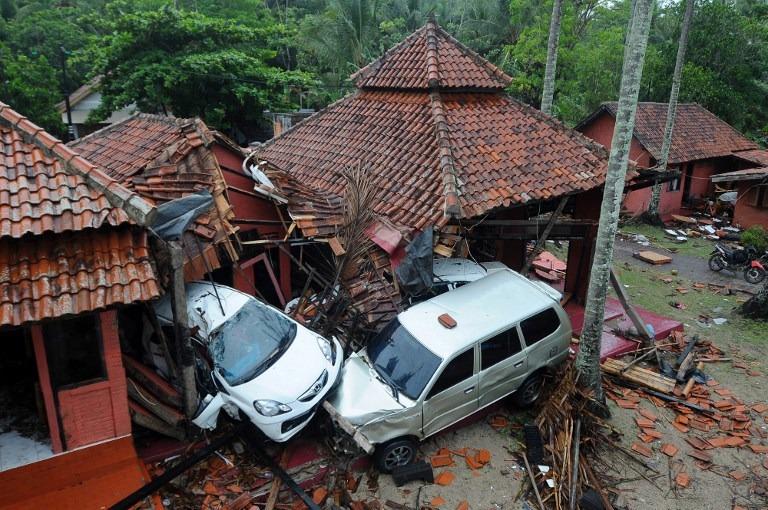 Damaged buildings and cars are seen in Anyer, Serang on Dec 23, 2018, after the area was hit by a tsunami on Dec 22 following an eruption of the Anak Krakatau volcano. (DASRIL ROSZANDI / AFP)

Anak Krakatau, halfway between Java and Sumatra, has been spewing ash and lava for months. It erupted about 24 minutes before the tsunami struck, and that could have triggered the landslide.

Taylor-Offord said the eruption and "high noise environment" may be why the landslide was not recorded seismically.

The fact the tsunami was triggered by a volcano, and not by an earthquake, may be the reason why no tsunami warning was signalled, scientists said

The fact the tsunami was triggered by a volcano, and not by an earthquake, may be the reason why no tsunami warning was signalled, scientists said.

Coastal residents reported not seeing or feeling any warning signs, such as an earthquake or receding water along the shore, before waves up to 3 meters high surged in.

This is because there are so many different variables and there is a "sweet spot" of exactly the right speed and volume of rocks slipping into and sea and deeper to generate a wave.

"In Indonesia, we've all been waiting for another big earthquake tsunami and then boom, here we have a volcanic landslide one," said Borrero.

"I've seen a few bits of imagery that suggest there's some sort of slant collapse that may extend underwater but none of this will be confirmed until there can be an offshore survey where they go and map the sea floor." 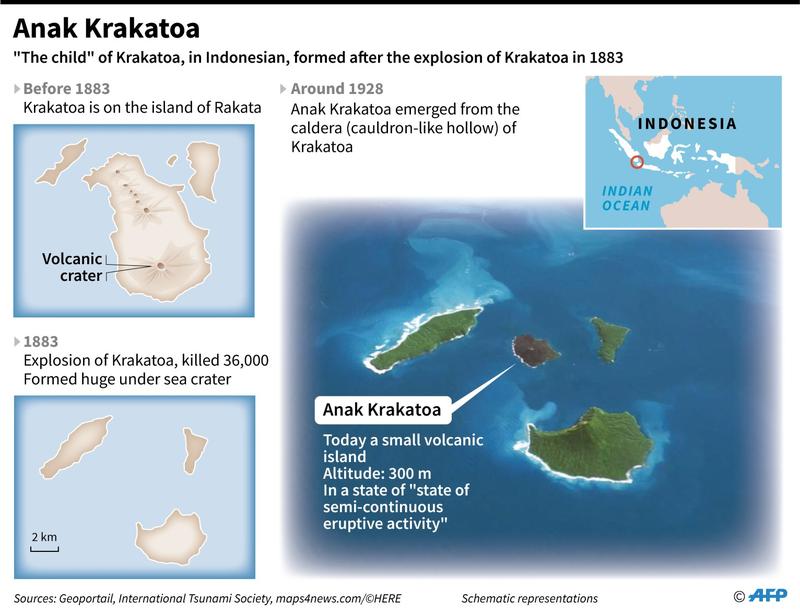 This AFP graphic depicts the formation of the volcanic Anak Krakatau island after the explosion of the Krakatoa volcano in 1883.

Anak Krakatau or "child of Krakatau" emerged from the Krakatau volcano, which in 1888 erupted with such force the blast was heard all the way in Perth, said Mika McKinnon, a geophysicist based in Vancouver, Canada.

Further eruptions have continued from the massive crater left behind.

McKinnon said volcanoes are weak, sloppy heaps of loosely bound rocks all slanted downhill and they slip off all the time.

If this happens to be a large portion, then it would displace enough water to trigger a tsunami.

There are no early warnings systems that can detect such landslide-driven tsunami.

Anak Krakatau is so close to shore there would never have been enough time to react and clear out the population.

"A similar event at Anak Krakatau might trigger another one, or it might not. Maybe a month later, or year from now. We will never know," she said.