By Dai Kaiyi in Hong Kong

A profit-making insurer is not without its prerequisites — being digital-savvy and customer-centric, the CEO of Aegon Asia Andrew Byrne tells Dai Kaiyi. 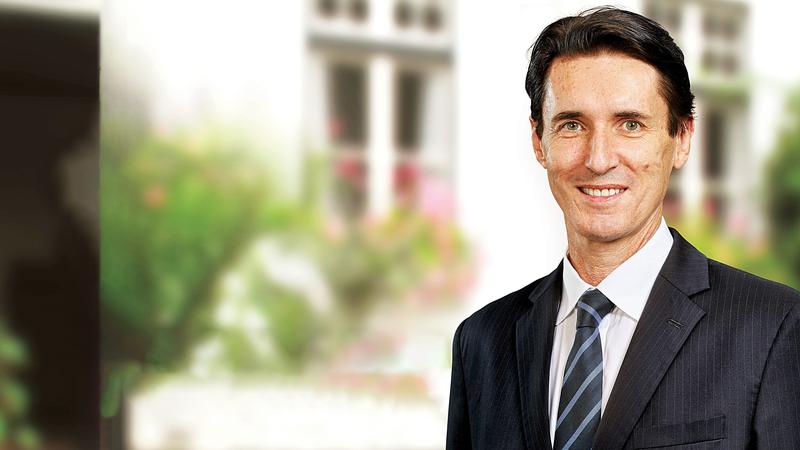 The demand for insurance is as robust today as it was more than a decade ago — even before the world was engulfed by the cataclysmic financial crisis in 2008 — giving everyone the impression that profits for the ubiquitous insurers are up for grabs.

However, Andrew Byrne begs to differ.

The CEO of Aegon Asia, a Netherlands-based insurer, believes that a profit-making insurer is not without its prerequisites — being digital-savvy and customer-centric.

Customers, especially in Asia, are far from well-served on the insurance front, as the many service providers are reluctant to keep up with paradigm-shifting technology, and customer mindsets are not the same as they were.

When I look back almost 10 years later, it’s probably the best career decision I’ve ever taken, but still a difficult one, walking away from stability

Before the financial tsunami swamped the world, commissions were relatively high as distributions were mainly channeled through agencies, delivering lackluster returns to customers.

However, Byrne has observed a progressive transformation in the industry over the last 10 years.

Not only has the ever-intensive competition increased the insurers’ focus on ensuring better outcomes to customers, but the digital side of the industry has seen great progress as well, providing customers with more-comprehensive product information.

“Its core principle is about transparency and helping consumers make better choices, so it doesn’t sell Aegon products, and it will refer you to any products of any insurer — that’s the value,” said Byrne, adding that the tech-powered website tore down walls that had been built by the traditional business model.

However, not every insurance company is as open and flexible to changes as Aegon is.

Challenges that include tedious policy documents, and agencies’ reluctance to be more open-minded to technology renovation, are slowing the industry’s evolution while raising doubts about insurers’ commitment to being focused on customers’ needs.

“Typically, what’s happened is, insurance companies have been influenced by the distribution rather than the end customer,” Byrne said. “It’s the age of the banks and the brokers, who said, ‘This is the product that we want,’ without giving the right value to the consumers.”

Aegon Asia’s CEO believes the changes are necessary for the industry. He said there is always going to be a need for a person-to-person financial environment, as customers need choice-making expertise from agencies and brokers.

“Increasingly, consumers are expecting they are accessing the information the same way the agencies do, which will be increasingly the case for financial services,” Byrne said. “I think we are in the early stages of that.”

In the past, a large part of the market has been structured around serving the existing distribution model, with banks or life insurance agencies selling insurance products in a way that ended up excluding a tremendous portion of the market. The middle and the lower market are in fact not being covered at all because both the agents and the banks are focused on the higher-value customers.

“There’s a logic to it because it’s expensive to distribute products,” said Byrne, but added that the insurance industry needs to have social responsibility.

Fortunately, the emergence of digital progress in the industry offers a brand new method of more-efficient distribution, which could improve the current situation in which the costs are sometimes too high relative to the benefits, he said.

Byrne said that Aegon can contribute to those people who “don’t get proper access” to good insurance today, using digital-powered channels and expanding its high-caliber service to the broader market. “I think we can do it in a way that’s cost-effective,” he said.

China, as the world’s second-largest economy, is leading the way in searching for and buying insurance products online. “To me, digital and the technology is just a solution, rather than the ‘answer of itself’,” Byrne said.

Going beyond the digital breakthrough in the industry, the upbeat note is also backed by the momentum of the Guangdong-Hong Kong-Macao Greater Bay Area — the Chinese central authorities’ initiative that is using the country’s southern powerhouse of innovation and economic growth in a bid to take on San Francisco, New York and Tokyo.

The Bay Area has exciting potential, as the city cluster of 71 million people, while is nearly triple Australia’s population of 25.4 million, shares “a lot of similarities” in terms of “what customers need across the mainland side as well as on the SAR side.”

In order to grab a larger market share, Aegon has to prioritize its job in fostering better brand recognition in Asia due to its absence of popularity in the region, which Byrne said was due to businesses in different regions having multiple brand names.

For instance, Transamerica Life Bermuda, acquired by Aegon in July 1999, is one of the largest insurers in the US, and it has mainly been selling insurance products to high-net-worth individuals.

Aegon’s business in Singapore and Hong Kong has all been under the name of Transamerica Life Bermuda, rendering its parent company rather unknown in the region.

With projected removal of cross-border restrictions to business operations, Transamerica Life Bermuda could start running a business on the mainland side, while Aegon THTF Life Insurance, a joint venture between Aegon and Tsinghua University-founded tech company Tsinghua Tongfang, would also be well-poised to start expanding into Hong Kong, Byrne said.

Alongside the Bay Area opportunity has been a long-standing issue of China’s aging population — both a challenge and an opportunity for insurers deploying business within the world’s second-largest economy, Byrne said.

“How does China support its aging population?” Byrne said, noting that 250 million people in China today are past retirement age, and 25 percent of the population will be retirement age — at least 60 years old — by 2030.

Coincidentally, the Chinese life insurance market, only a mere 10 percent of the US population in 2006, expanded tremendously over the following decade and rose to be the second-largest market in this category in the world by 2017.

“There is a real societal need to solve the aging-population issue” as the proportion of retirees to the working population is too high, Byrne said. “We have to have ways to make sure the savings are enough to pay for people’s retirement.”

Born and raised in Australia, Andrew Byrne has always loved hiking. On that front, Hong Kong — a city crisscrossed with hiking trails — has never disappointed him after his move to the city.

What he almost missed was the tremendous potential of the insurance industry in the city and region.

With over 25 years of experience in the insurance and financial services industries, Byrne started his professional career without envisioning it at all.

Byrne had an opportunity to dip his toes into the industry at a relatively young age — the then-28-year-old was given the responsibility for one of the biggest single insurance product lines for his employer at that time.

With around 1 million customers in Australia, Byrne thought that he was providing a service that made a “significant difference for a large number of people”, and the sense of responsibility ignited his interest in the sector.

Byrne also came to appreciate the handy, seamless, immediate feedback, powered by a prodigious amount of data and statistics.

“It gave you a lot of insight about how people make claims, how people choose to buy insurance or those sort of things, so the data I found very interesting,” said Byrne, who fell in love with the statistical part of the industry. This was despite the fact that he wasn’t really focused on the math side of courses during his university years in Canberra, even though the CEO once majored in accounting and finance.

Byrne did have a choice between two diverging career trajectories — a finance role more relevant to his background and expertise, or a general-manager role in insurance.

Out of passion and love toward the insurance industry, Byrne, with barely a second thought, decided to stay in that sector — despite its being a low-margin business in which any growth that one company notched was at the expense of another company’s.

Everything went according to plan for Byrne — until Direct Asia, a Singapore-based private equity firm, approached him and offered him a position as head of the Asian startup.

“That was a career turning point for me,” Byrne said.

The choices he made moved him away from a large and established business — with 1,000 employees working for him in Sydney, to essentially heading a startup in Asia with only five employees under his supervision.

“To build up business from that point, there were no insurance license, no infrastructure, no IT system, nothing at all,” the CEO said.

But in hindsight, Byrne is more than grateful for his career choice back then.

“When I look back almost 10 years later, it’s probably the best career decision I’ve ever taken, but still a difficult one, walking away from stability,” he said.

Sensing huge business potential in Asia, Byrne relocated to the region, where old-style insurers operated in the market with high commissions, and customers ended up not getting quality insurance services.

“Asian insurers would only focus on most potential customers that would give them the most commissions and the biggest margins,” said Byrne, who noted that that strategy excluded an estimated 70 percent of the market, underdeveloped and overlooked in terms of good insurance.

The avant-garde entrepreneur has always been keenly interested in industry innovation and improving insurance outcomes in the community, including developing new distribution and customer-service models.

As far as he concerned, the market should be transparent, with product offered at a lower cost, and communications with customers — in a straightforward manner.