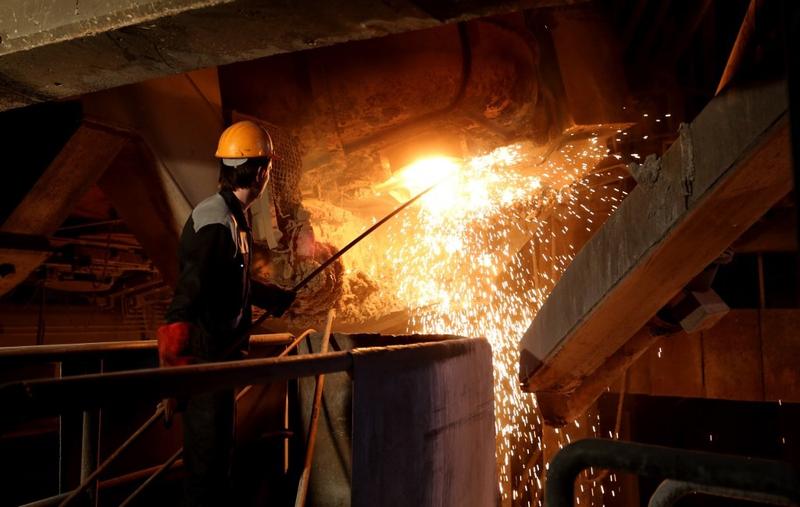 This file photo taken on April 6, 2015, shows an employee working at the Iran Alloy Steel Company's plant in the central Iranian city of Yazd. US President Donald Trump on May 8, 2019, announced sanctions against Iran's industrial metals, hours after Tehran said it was relaxing some restrictions on its nuclear program. (ATTA KENARE / AFP)

WASHINGTON/LONDON — US President Donald Trump on Wednesday imposed new sanctions on Iran, targeting revenue from its exports of industrial metals, the latest salvo in tensions between Washington and Tehran over a 2015 international accord curbing the Islamic Republic's nuclear program.

Iran had announced hours earlier that it was relaxing some restrictions on its nuclear program, steps that stopped short of violating the deal with world powers for now, but threatening more action if countries do not shield it from US sanctions.

An executive order issued by Trump covers Iran's iron, steel, aluminum, and copper sectors, the government's largest non-petroleum-related sources of export revenue and 10 percent of its export economy, according to a White House statement

An executive order issued by Trump covers Iran's iron, steel, aluminum, and copper sectors, the government's largest non-petroleum-related sources of export revenue and 10 percent of its export economy, according to a White House statement.

"Tehran can expect further actions unless it fundamentally alters its conduct," Trump said.

The administration says the nuclear deal, negotiated by Trump's predecessor Barack Obama, was flawed as it is not permanent, does not address Iran's ballistic missile program and does not punish it for waging proxy wars in the Middle East.

Tensions between the two countries were already high when the Trump administration said last weekend that it was deploying a carrier strike group and bombers to the Middle East in response to what it said were "troubling indications and warnings" from Iran.

On Wednesday, a senior administration official said the United States was "not escalating militarily against Iran" and accused Iran of being "provocative." It was in Iran's best interests to continue complying with the pact, the official said.

The executive order effectively bans entities from the purchase, acquisition, sale, transport, or marketing of those minerals and their products from Iran or face sanctions.

It also states any individuals and entities would be subject to US sanctions if they knowingly engaged in a significant transaction for the sale, supply, or transfer to Iran of significant goods or services used in connection with those industrial metal sectors.

The US Treasury said it was allowing a 90-day winding down period for transactions related to Iran's metals sectors and warned against entering into any new business after May 8, saying that would not be considered a wind-down activity.

A year ago, Trump unilaterally withdrew the United States from the nuclear deal signed by Iran, Russia, China, Britain, France, Germany and the United States. The accord relaxed international sanctions on Iran in return for Tehran accepting curbs on its nuclear program that were designed to prevent it from developing nuclear weapons. Tehran has said it pursued a peaceful nuclear program only.

Iranian President Hassan Rouhani announced changes on Wednesday that experts said seemed tailored to ensure Tehran avoids triggering the deal's mechanism to punish it for violations, at least for now. The main new measure that takes effect now would have limited practical impact: a halt to Iran's sales of enriched uranium and heavy water to other countries.

The deal allows such sales so Iran can keep reducing its stockpiles below maximum thresholds, but Washington already effectively barred the sales with a sanctions move last week.

For now, Iran's stockpile of enriched uranium is still well below the deal's cap and heavy water is less sensitive.

"The Iranian people and the world should know that today is not the end of the JCPOA," Rouhani said in a televised address, using the acronym for the nuclear deal. "These are actions in line with the JCPOA."

Rouhani also threatened that in 60 days Iran would resume enrichment of uranium beyond the low fissile purity - suitable for civilian nuclear power generation - allowed under the deal, unless the five other powers signed up to it found a way to protect Iran's oil and banking industries from US sanctions.

Tehran halting compliance with some elements of the nuclear deal was "nothing less than nuclear blackmail of Europe," Tim Morrison, special assistant to the US president and senior director for weapons of mass destruction, told a conference.

"Now is the time for the community of nations to strongly condemn Iran’s nuclear misconduct and increase pressure on the regime to comply with US demands," Morrison said.

Morrison said the United States would move quickly against any attempt by European countries to undermine Washington's sanctions pressure on Iran. He advised them against using the so-called Special Purpose Vehicle to facilitate non-dollar trade to circumvent US sanctions.

From this month, Washington has effectively ordered countries worldwide to stop buying Iranian oil or face sanctions of their own. The Trump administration has revoked waivers that had allowed some countries to continue buying Iranian oil and it aims to reduce Iranian crude exports to zero.

Iran announced on Wednesday it was relaxing some restrictions on its nuclear program, and also threatened that in 60 days Iran would resume enrichment of uranium beyond the low fissile purity allowed under the deal, unless the five other powers signed up to it found a way to protect Iran's oil and banking industries from US sanctions

Washington has also blacklisted Iran's Revolutionary Guards as a terrorist group. Iran responded with threats to close the Gulf's Strait of Hormuz - the conduit for about a third of the world's seaborne oil exports - if its ships were blocked there.

"We have made our focus diplomatic isolation and economic pressure and that policy is working," Special Envoy for Iran Brian Hook said in a briefing. Hook said that more nations now, compared with a year ago, were in agreement with the United States on Iran.

Washington's European allies opposed Trump's decision to pull out of the deal and have tried, so far in vain, to find ways to blunt the economic impact of new US sanctions, which include an all-out effort to block Iran's oil exports to throttle its economy.

France and Germany both said they wanted to keep the nuclear deal alive, and warned Iran not to violate it.

"It is important to avoid any action that would impede the implementation of their obligations by the parties now engaged in the accord or that would fuel an escalation," deputy foreign ministry spokesman Olivier Gauvin said in a statement.

Russia and Iran both blamed the United States for what they portrayed as Tehran's forced decision to suspend some pledges under the nuclear deal, while putting the onus on European powers to guarantee sanctions relief for Iran.

China said the deal should continue to be implemented and called on all sides to exercise restraint and pursue dialogue.

The looming total ban on oil sales is likely to sharply increase the economic hardship for Iran's 80 million people.

Finding a response is the biggest test yet for Rouhani, a pragmatist who has faced strong opposition from hardliners.