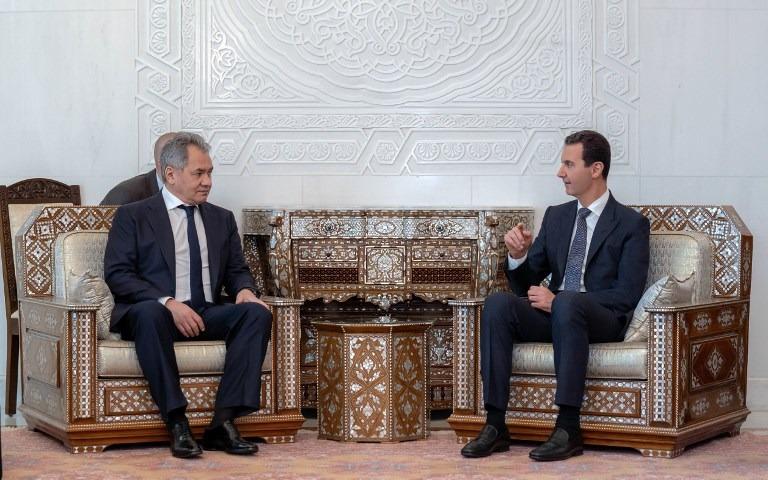 Shoygu delivered a message from Putin to al-Assad, and they discussed fighting international terrorism in Syria, various aspects of security in the Middle East and post-conflict settlement, the Russian Defense Ministry said in a press release.

Both sides agreed to continue joint work to find suitable solutions to the issues of Idlib, the last major rebel stronghold in Syria, and the Eastern Euphrates River region in eastern Syria, which is largely controlled by the US-backed Syrian Democratic Forces (SDF).

They exchanged views on expanding the possibilities for the voluntary return of refugees and temporarily displaced persons to their places of residence in Syria, as well as providing humanitarian assistance to the Syrian people.

Syria with the support of Russia achieved significant success in the fight against international terrorism, and they saved the Syrian state and created conditions for the return of citizens to a peaceful life, Shoygu told al-Assad.

"However, not everyone is satisfied with the successes of the Syrian government in restoring a peaceful life. Western countries are trying to minimize any positive changes in Syria and create new obstacles to ending the crisis," Shoygu said.

The visit of Shoygu comes a day after the chiefs of staff of Iran and Iraq visited Syria and held meetings with Syrian Defense Minister Ali Abdullah Ayyoub and then Assad.

During the meeting with the two officials, Ayyoub said the SDF must embark on reconciliation with the government, or the areas under their control will be retaken by the Syrian army.

READ MORE: Russia, Turkey to work together on rebuilding Syria

The Syrian official said the government will completely wrest control over all territory including Idlib sooner or later, through reconciliations or military force.

The Syrian government has long said it would retrieve Idlib from the ultra-radical rebels. However, a planned military campaign was put on hold late last year when Russia, Iran and Turkey agreed on setting up a demilitarized zone in Idlib.