Trump to visit Japan in late May 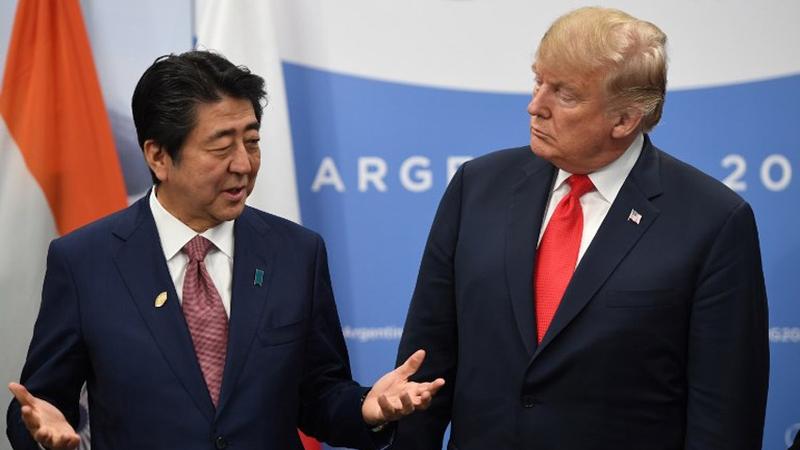 In this Nov 30, 2018 photo, Japan's Prime Minister Shinzo Abe (left) speaks with US President Donald Trump during a meeting in the sidelines of the G20 Leaders' Summit in Buenos Aires. (SAUL LOEB / AFP)

TOKYO - US President Donald Trump will visit Japan as a state guest in late May, the Japanese government said Friday.

The fact that Japan will host Mr. Trump and his wife as the first state guests under the new imperial era of Reiwa symbolizes the bond of the unwavering Japan-US alliance

According to the government's top spokesperson, Trump's visit will be from May 25 to 28 and he will be the first foreign leader to meet with Crown Prince Naruhito who will ascend the Chrysanthemum throne on May 1.

"The fact that Japan will host Mr. Trump and his wife as the first state guests under the new imperial era of Reiwa symbolizes the bond of the unwavering Japan-US alliance," Chief Cabinet Secretary Yoshihide Suga told a press briefing on the matter.

Japanese Prime Minister Shinzo Abe will hold summit talks with Trump during the president's first visit to Japan in a year and a half, government officials said, with issues of security and trade likely to be on the agenda.

Trump will also have an audience with the new Emperor and have dinner at the Imperial Palace, officials said.

The US president has expressed his wish to watch a grand sumo event and will play golf with Abe.

Abe will hold talks with Trump in Washington on April 26 and 27 and the pair will likely meet again at the Group of 20 summit in Osaka in June.