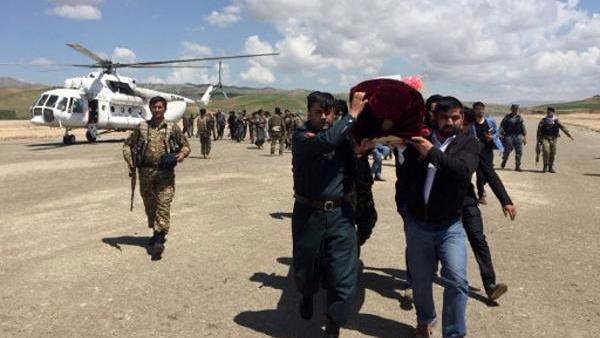 Afghan relatives carry the coffin of an Afghan National Army (ANA) soldier killed in a Taliban attack on an army base, in Takhar province on April 23, 2017. The country observed a national day of mourning April 23 after at least 100 soldiers were killed or wounded in a Taliban attack on a military base, prompting angry calls for ministers and army chiefs to resign. (Naseer Sadeq / AFP)

ISLAMABAD - Afghanistan's Taliban announced the start of their spring offensive Friday, promising to build their political base in the country while focusing military assaults on coalition and Afghan security forces.

Taliban spokesman Zabihullah Mujahid announced the launch of the offensive in an email statement that boasted Taliban control over more than half of the country, referencing a February report issued by Washington's special inspector general for Afghan reconstruction.

That report said that the Afghan government had control or influence over only 52 percent of Afghanistan's 407 districts last year, down from 63.4 percent previously.

The Taliban dubbed this year's offensive "Operation Mansouri," named for the Taliban leader killed last year in a US drone strike.

"Hence, keeping the evolving situation in mind, this year's Mansouri Operations will differ from previous ones in nature and will be conducted with a twin-tracked political and military approach," said Mujahid. He did not make any mention of peace talks with the government.

Attempts to find a peaceful end to Afghanistan's protracted war have been relentlessly unsuccessful.

On the political side, Mujahid said the Taliban were going to begin building institutions in areas under their control, establishing what he called "social justice and development" mechanisms. He didn't offer specifics nor did he indicate whether this was an indication that the Taliban would step up their brand of justice that during their rule included the chopping off of hands for those convicted of theft and public executions.

While the Taliban may be officially announcing their spring offensive, recent attacks including one earlier this week on an army base in northern Afghanistan that killed more than 140 Afghan soldiers would seem to warn of a tough fighting season ahead. In the latest attack, the Taliban disguised as Afghan army soldiers slipped into the compound of the 209 Corps in northern Afghanistan's Balkh province. While two militants exploded their suicide vests, the others opened fire on scores of soldiers.

As well as the Taliban, Afghanistan is also battling an emerging local Islamic State affiliate known as Islamic State in Khorasan.

The Taliban announcement of the offensive coincides with the anniversary of Afghanistan's so-called Saur Revolution against its pro-Russian rulers, which led to a 10-year uprising by US backed Islamic insurgents or mujahedeen against an invading Soviet army. The Soviets withdrew defeated in 1989.