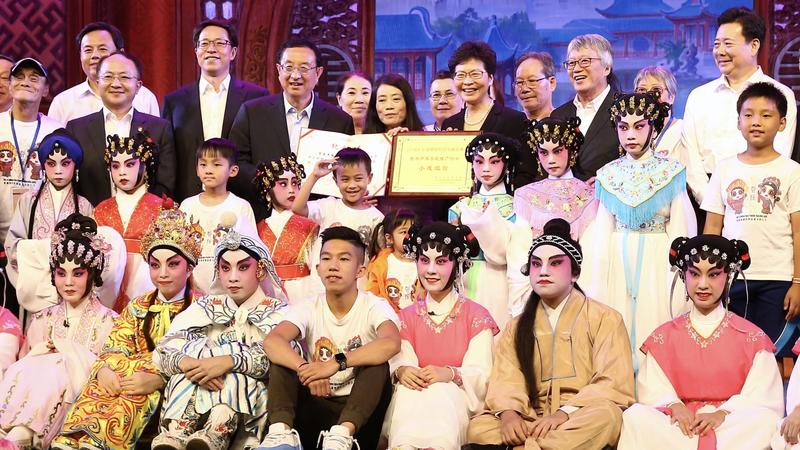 Chief Executive Carrie Lam Cheng Yuet-ngor (fifth right, back row); Zhang Xiaoming (fourth left, back row), director of the Hong Kong and Macao Affairs Office of the State Council; Wang Zhimin (third left, back row), director of Liaison Office of the Central People's Government in the Hong Kong SAR; Minister of Culture and Tourism Luo Shugang (fifth left, back row) and other officials and guests have a group photograph with young Cantonese Opera performers after their performance in Beijing on Friday. (Zou Hong / China Daily)

Audience members included Chief Executive Carrie Lam Cheng Yuet-ngor; Zhang Xiaoming, director of the Hong Kong and Macao Affairs Office of the State Council; Wang Zhimin, director of the Liaison Office of the Central People’s Government in the Hong Kong Special Administrative Region; and Minister of Culture and Tourism Luo Shugang. The show was organized and sponsored by the Ministry of Culture and Tourism.

The show began with the Cantonese Opera song adapted from a chapter in Dream of the Red Chamber, one of China’s four classic novels. The actors and actresses, aged 6 to 21, are from the Hong Kong Sing Fai Cantonese Opera Promotion Association.

She fondly remembered the exact date and words the president said to her. “President Xi encouraged me to keep working hard and encourage more people to practice Cantonese Opera.”

Lam recalled this anecdote when she met the press in the afternoon. The CE emphasized the importance of promoting Cantonese Opera on the mainland and beyond.

Lam also conveyed Xi’s greetings to the young performers as Xi and his wife Peng Liyuan are currently on an overseas visit.

Li remembered she was quite nervous that day because “I never expected President Xi would come. I feared that I was not well prepared.”

At the thought of performing in front of Lam, however, she was not as tense; she is now used to it. Her troupe has held performances in July every year in Hong Kong – and Lam has attended.

This was her first time to visit Beijing for a debut show in the capital.

“We went to the Temple of Heaven and it was impressive. Beijing locals were friendly and nice.”

Having listened to Peking Opera many times and appreciating the traditional art form, Li said the biggest difference between Peking and Cantonese operas was that the former had fixed gestures and routines, whereas Cantonese Opera stars can improvise.

Another young celebrity actress praised by Xi was Patrice Luk, 11, who has practiced Cantonese Opera for six years. Unlike Li, Luk – who played the role of Lin Daiyu – said she was a bit uneasy, “because the stage is new, the audience is new, and I don’t want to disappoint them”.

Recognizing that Cantonese Opera is a distinctive culture in Hong Kong, however, Li and Luk said few of their peers were interested in it. They both have a mission to promote Hong Kong’s cultural heritage far and wide.

“I often talk about Cantonese Opera with my classmates regardless of whether they know it or not. I also invite my friends to watch my performances,” Li said.

Yim Wing-si, 21, admitted that young people still had a stereotypical view that Cantonese Opera was for elderly people. She hopes to correct this misunderstanding and encourage her peers to embrace it. “You don’t have to practice it, but at least have some knowledge about the art,” added Yim.