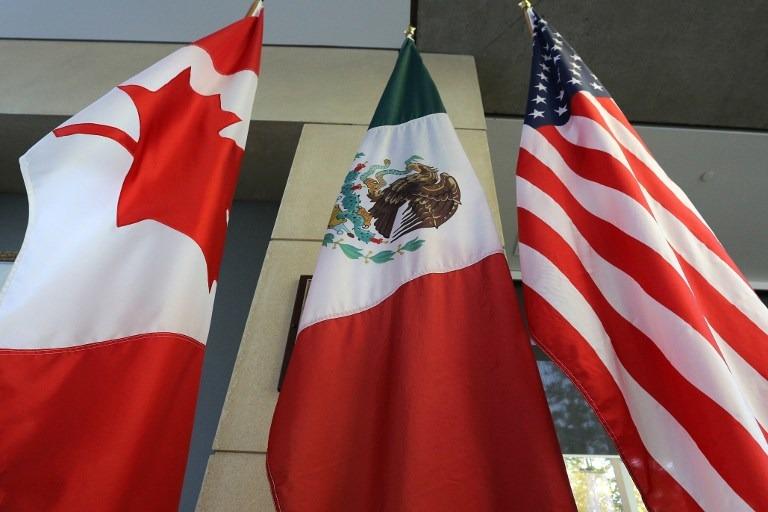 In this file photo taken on Sept 24, 2017 the Mexican, US and the Canadian flags sit in the lobby where the third round of the NAFTA renegotiations are taking place in Ottawa, Ontario. Canadian and US negotiators reached a deal late on Sept 30, 2018 with the pact newly named the United States-Mexico-Canada Agreement (USMCA). (LARS HAGBERG / AFP)

TORONTO — Canada and the United States reached a deal Sunday night for Canada to stay in a free trade pact with the US and Mexico.

The new deal, reached just before a midnight deadline imposed by the U.S., will be called the United States-Mexico-Canada Agreement, or USMCA. It replaces the 24-year-old North American Free Trade Agreement, which President Donald Trump had called a job-killing disaster.

The agreement reached Sunday gives US farmers greater access to the Canadian dairy market. But it keeps a NAFTA dispute-resolution process that the US wanted to jettison and offers Canada protection if Trump goes ahead with plans to impose tariffs on cars, trucks and auto parts imported into the United States.

In a joint statement, the two nations said the new deal would be called the United States-Mexico-Canada Agreement (USMCA). The agreement preserved a NAFTA dispute-resolution process that the US wanted to jettison

Canada has agreed to provide US dairy farmers access to about 3.5 percent of its approximately US$16 billion annual domestic dairy market. Although Canadian sources said its government was prepared to offer compensation, dairy farmers reacted angrily.

"We fail to see how this deal can be good for the 220,000 Canadian families that depend on dairy for their livelihood,” Pierre Lampron, president of Dairy Farmers of Canada, said in a statement.

The deal also requires a higher proportion of the parts in a car to be made in areas of North America paying at least US$16 anhour, a rule aimed at shifting jobs from Mexico.

Canada and Mexico each agreed to a quota of 2.6 million passenger vehicles exported to the United States in the event that Trump imposes 25 percent global autos tariffs on national security grounds.

The quota would allow for significant growth in tariff-free automotive exports from Canada above current production levels of about 2 million units, safeguarding Canadian plants. It is also well above the 1.8 million cars and SUVs Mexico sent north last year.

But the deal failed to resolve US tariffs on Canada's steel and aluminum exports. 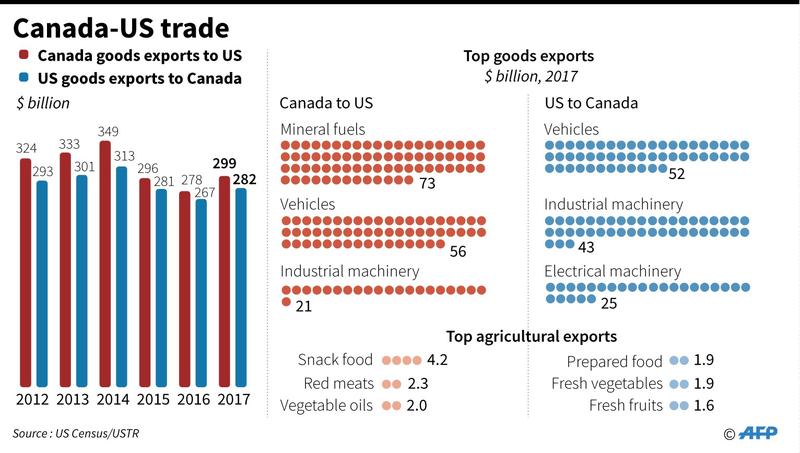 "It's a good day for Canada," Prime Minister Justin Trudeau said as he left his office. Trudeau said he would have more to say Monday.

"It is a good night for Mexico, and for North America," Mexican Foreign Minister Luis Videgaray tweeted. Representatives for the government of Mexican president-elect Andres Manuel Lopez Obrador have called a press conference to discuss details of the trade deal on Monday.

"USMCA will give our workers, farmers, ranchers, and businesses a high-standard trade agreement that will result in freer markets, fairer trade and robust economic growth in our region," the joint statement reads. "It will strengthen the middle class, and create good, well-paying jobs and new opportunities for the nearly half billion people who call North America home."

The US and Canada were under pressure to reach a deal by midnight Sunday, when the US must make public the full text of the agreement with Mexico.

Canada, the United States' No. 2 trading partner, was left out when the US and Mexico reached an agreement last month to revamp the North American Free Trade Agreement.

The Trump administration officially notified Congress of the US-Mexico trade agreement on Aug 31. That started a 90-day clock that would let outgoing Mexican President Enrique Pena Nieto sign the new pact before he leaves office Dec 1.

Mexico's economics ministry said in a tweet earlier Sunday that the text of the pact would be delivered to the Mexican Senate Sunday night, adding that "if there is agreement with Canada, the text will be trilateral. If there is not, it will be bilateral."

Trump had said he wanted to go ahead with a revamped NAFTA — with or without Canada. It was unclear, however, whether Trump had authority from Congress to pursue a revamped NAFTA with only Mexico, and some lawmakers said they wouldn't go along with a deal that left out Canada.

Some lawmakers immediately expressed relief that Canada had been reinstated in the regional trading bloc. "I am pleased that the Trump administration was able to strike a deal to modernize NAFTA with both Mexico and Canada," said Senate Finance Chairman Orrin Hatch, R-Utah. "NAFTA is a proven success.

US-Canada talks bogged down earlier this month, and most trade analysts expected the Sept. 30 deadline to come and go without Canada being reinstated. They suspected that Canada, which had said it wasn't bound by US deadlines, was delaying the talks until after provincial elections Monday in Quebec, where support for Canadian dairy tariffs runs high.

ALSO READ: Canada, US in 'extremely intense' talks on NAFTA