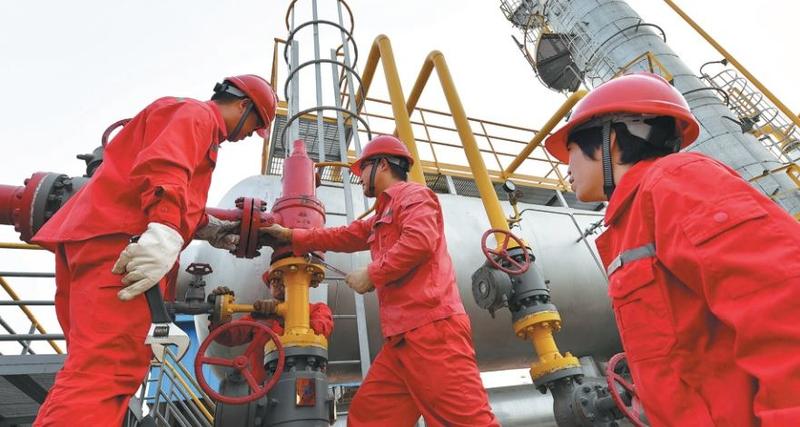 While China needs more natural gas to meet its surging demand for clean fuel, a lack of storage capacity is making it difficult for the country to cope with supply crunches in winter months when demand surges to heat homes.

The lack of storage capacity is restricting gas supply, and the country's total underground storage capacity available for peak shaving is significantly lower than the international average of 15 percent, according to analysts at London-headquartered analytics firm IHS Markit Ltd.

Mu Lei, Associate in the field of Asian oil and gas at JPMorgan's Asia-Pacific Equity Research

Bloomberg Intelligence estimated earlier that China's gas storage will rise to 4.1 percent of demand in 2020.

China National Petroleum Corp, the country's biggest oil and gas company, built 23 of the 25 State-owned facilities, with the remaining two built by China Petroleum and Chemical Corp, the world's largest refiner by volume.

With the increasing penetration of gas in the heating sector, especially in northern regions, gas demand in China will become more seasonal and the country is in urgent need of more storage capacity, said IHS Markit.

China consumed 280.3 billion cubic meters of natural gas in 2018, up 18.1 percent year-on-year, while it also aims to increase the share of gas in its energy mix from the current 7.8 percent to 10 percent of the nation's primary energy demand by 2020, according to the National Development and Reform Commission, the nation's top economic regulator.

As a result, China has been speeding up expansion of its much-needed underground gas storage facilities in recent years. It has issued several policies since 2017 focusing on storage buildup and the related pricing mechanisms. The 13th Five-Year Plan on Natural Gas Development set a target for underground storage working capacity to reach 14.8 billion cubic meters by 2020 from the current capacity of around 10 billion cubic meters.

The National Development and Reform Commission and the National Energy Administration released a document last April, stipulating that all gas supply entities must have sufficient gas storage by 2020, with gas supply companies to have a storage capacity no lower than 10 percent of the contract sales of that year; local governments at or above the county level to have storage capacity able to meet at least three days of gas demand; and urban gas enterprises to have a storage capacity of at least 5 percent of their gas consumption.

Analyst said if these targets were met, China would be able to achieve a 16 percent storage level, which is similar to other large gas markets.

Considering the country's high dependence on oil and gas imports, it's necessary to ramp up construction of gas storage tanks and come up with a more open and liberalized gas sector in the country, said Li Li, research director at energy consulting company ICIS China.

"While challenges are expected to be resolved in the long term as the investment life for natural gas storage is normally 10-20 years, all participants, including the country's national oil corporations and urban gas enterprises, are currently facing similar challenges," said Mu Lei, an associate in the field of Asian oil and gas at JPMorgan's Asia-Pacific Equity Research.

"China natural gas storage capacity expansion was only accelerated a few years ago, and the policymakers, storage operators, buyers and suppliers all have limited experience working together under fast industry expansion," he said.

"The policymakers should work closely with all industrial participants to enable favorable investment returns, a fluent mechanism and healthy market as the first step of upcoming industrial reform."

According to Mu, there are primarily two types of underground gas storage in China－depleted oil and gas reservoir storage and salt cavern storage－both of which have unique and specific geological requirements, which also pose challenges for gas suppliers.

"With a positive outlook for China's natural gas demand growth, we believe the natural gas storage business has great development potential," he said.

Mu believed with a strong government push, underground storage construction will accelerate and likely meet the 2020 target, despite challenges, including a lack of technically suitable storage sites and a clear pricing mechanism, which might still continue to impede near-term storage expansion.

Zhang Mingsen, former deputy chief engineer at the Beijing Research Institute of Chemical Industry under the State-owned oil giant China Petroleum and Chemical Corp, suggested that the government should provide fiscal and tax subsidies for the construction of underground gas storage facilities and improve the pricing mechanism for natural gas to achieve a more open gas market system.

Sufficient storage facilities and competent peak load regulation capacity are necessary for a stable supply of natural gas and China should align itself with world standards, with gas in storage contributing more than 10 percent of annual gas consumption, he said.