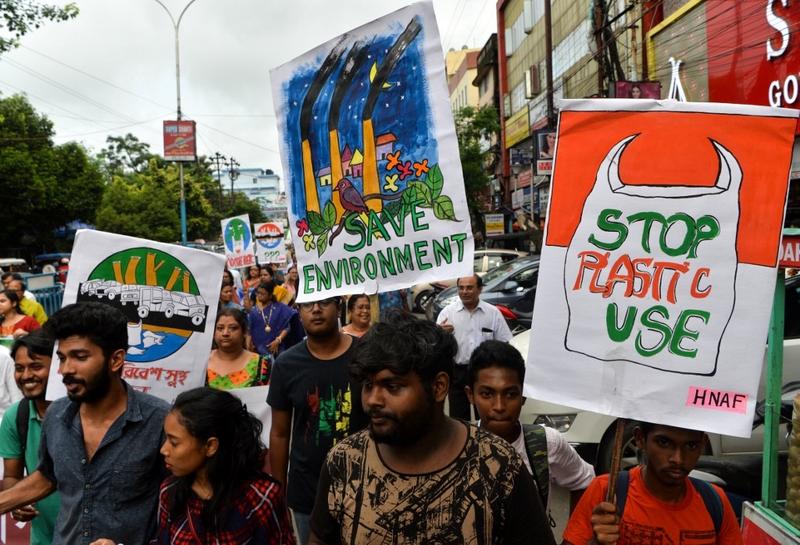 Indian citizens hold placards as they take part in a campaign against plastic bags and for a 'Plastic Free Zone' in Siliguri, India, July 8, 2019. (DIPTENDU DUTTA / AFP)

Among them is the Housing and Urban Ministry, which has banned all single-use plastic items, including plastic files.

The Airport Authority of India has said 55 airports are now free of single-use plastics, while national carrier Air India announced that it would ban single-use plastic items such as spoons, cups and plates on most of its flights from Oct 2 - Mahatma Gandhi's birthday.

"Plastic teacups will be replaced with sturdy paper cups. Banana chips and sandwiches are presently packed in plastic pouches, and these will be changed to butter paper pouches," the airline said.

... India will put an end to single-use plastics in coming years. We are committed to the development of environmentally friendly substitutes and also an efficient plastic collection and disposal method.

Corporate India, too, has taken note of the move.

Mahindra Group chairman Anand Mahindra tweeted a picture of refillable bottles, saying these had replaced plastic bottles, after a social media user pointed them out in a picture of a boardroom meeting.

The flurry of bans comes amid a push by Prime Minister Narendra Modi, who has asked Indians to get rid of single-use plastics before Oct 2. At a recent Conference of Parties to the United Nations Convention to Combat Desertification, he said: "My government has announced that India will put an end to single-use plastics in coming years. We are committed to the development of environmentally friendly substitutes and also an efficient plastic collection and disposal method."

Single-use plastics, according to the UN, include plastic products such as bags, straws, plates and bottles that are discarded after one use.

Like most countries, India has a growing plastic problem: It chokes rivers and creates hazards on land.

Cows, which roam freely on the roads, are often killed by the plastic bags they ingest while searching for food among rubbish.

In Mumbai, the country's financial capital, beaches are often strewn with plastic waste, which then finds its way into the ocean.

One garbage mound on the outskirts of Delhi captured headlines after it was found to be 65 m tall, just a few meters shy of the height of the iconic Taj Mahal.

Various states have tried banning plastic. Sikkim in the northeast banned disposable plastic bags in 1998, while others did it in some form or other over the years. But most of the bans were poorly implemented.

Environmentalists said much more needs to be done, apart from banning single-use plastic.

Swati Singh Sambyal, program manager of environmental governance (waste management) at the non-profit Centre for Science and Environment, said: "A ban is a very small part of the whole solution. We need to get waste management right... in segregating plastics. We are not able to segregate wet and dry successfully. We don't have any back-end measures in place."

She also noted that there is no data on how much single-use plastic waste is generated in India.

"We put a ban... For a month or so, it may work because of campaigning, but it will die down. If you want a holistic plastic ban, many things need to be worked out, with a clear definition of what you mean by single-use plastic and guidelines on how to switch to alternatives," she said.

A ban does help in some way in less littering - that is one visible impact. Unless we have an adequate system for collection and recycling, these bans are not going to stay for a long time.

Sanjay Kumar, an expert on waste management from Skat Consulting, said: "A ban does help in some way in less littering - that is one visible impact. Unless we have an adequate system for collection and recycling, these bans are not going to stay for a long time.

While India generates less plastic than many other countries, it is still a massive problem.

Concerns have also been raised about what happens to the hundreds of thousands employed in the plastic industry.

Some believe the problem is not plastic itself.

Thiagarajar College of Engineering's Professor Rajagopalan Vasudevan, who is known as the plastic man of India for developing a method to reuse plastic waste to construct sturdier roads, said the waste generated in India could be used for building roads.

"The aim should not be to ban but to plan, because plastic is a poor man's friend and the common man's need. It is the most useful material in every field, from needle to machinery. By itself, it is not a problem. It is the human culture that is the problem. We throw it indiscriminately."

He added: "You can use all the plastic (waste generated in India) in roads. Just give it to me."