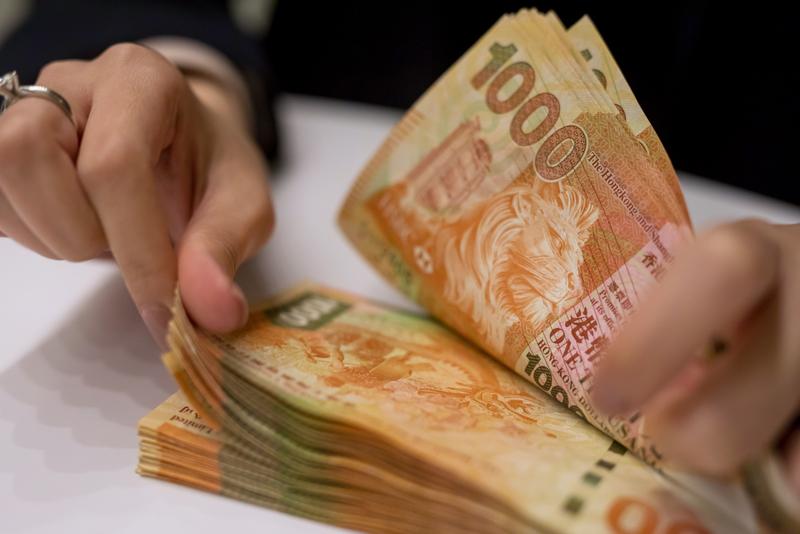 Asia’s best carry trade is suddenly in Hong Kong, where the local dollar has strengthened to an almost three-year high.

Elevated local rates are increasing the appeal of owning the city’s currency, after years of depreciation wagers. Selling the greenback and using the proceeds to buy Hong Kong dollars has delivered Asia’s highest Sharpe ratio -- a measure of returns adjusted for price swings -- over the past month.

The sustained strength has much to do with expectations that liquidity conditions will remain tight, keeping funding costs for the local dollar high versus those on the greenback. Traders unwinding their short positions in December triggered the biggest monthly rally since 2008, and the longest in three years.

“For the time being, the yield differential is still in favor of the Hong Kong dollar and it’ll probably stay on the strong side of the midpoint for a while,” said Khoon Goh, head of Asia research at Australia & New Zealand Banking Group Ltd. Short-term rates are likely to remain elevated heading into the Lunar New Year holiday before falling in February, he said.

The options market is now pricing in a roughly 50-50 chance that the currency -- which is pegged to the US dollar -- will touch the strong end of its narrow trading band by the end of March. That compares with just 9.5% about a month ago. The Hong Kong dollar hasn’t been quoted at the 7.75 per greenback level since early 2016.

One-month interbank funding costs for the currency, known as Hibor, have been higher than comparable rates on the greenback -- or Libor -- since early November. That’s the longest stretch since 2015, forcing investors who had profited by borrowing the Hong Kong dollar cheaply and selling it against higher-yielding currencies to shift their strategy. The premium briefly reached the highest since the 1990s on Nov. 14.

ALSO READ: Hong Kong's dollar jumps into strong half of its trading band

It marks a dramatic reversal from before mid-2019, when Hibor had been lower than Libor for most of the past few years. The short Hong Kong dollar trade became so popular that the currency was repeatedly pushed to the weak end of its trading band against the greenback, prompting the local de facto central bank to repeatedly intervene.

As the Hong Kong Monetary Authority spent billions to defend the peg, it shrank the pool of cash in the city. That meant mega share sales like Alibaba Group Holding Ltd.’s late last year -- which mop liquidity as investors set aside cash to buy stock -- may have a greater impact on local rates than before. The city’s exchange operator has been discussing more secondary listings with Chinese tech firms. 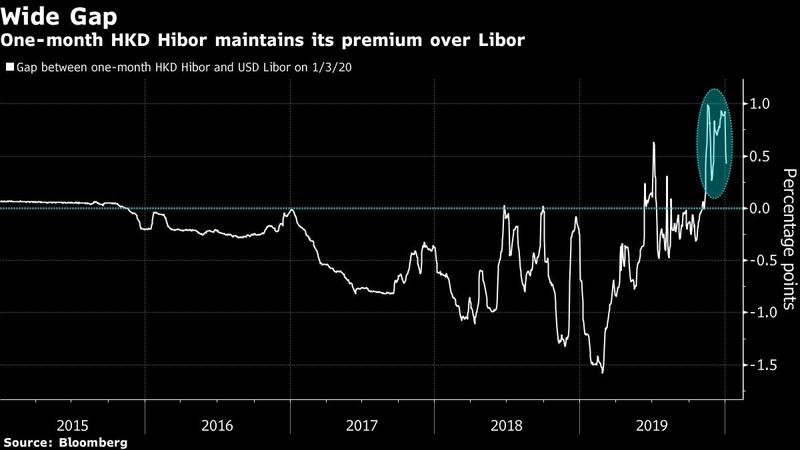 Some analysts say they currency’s strength will be short lived, and the carry trade’s attractiveness will fade. ANZ’s Goh expects the Hong Kong dollar will weaken to around 7.82, predicting short-term rates will decline after seasonal demand fades, narrowing its yield gap with the greenback.

Eddie Cheung, an emerging markets strategist at Credit Agricole CIB, says the city’s weak economic outlook will weigh on growth and the currency. “The Hong Kong dollar should touch 7.85 before it touches 7.75,” he said.