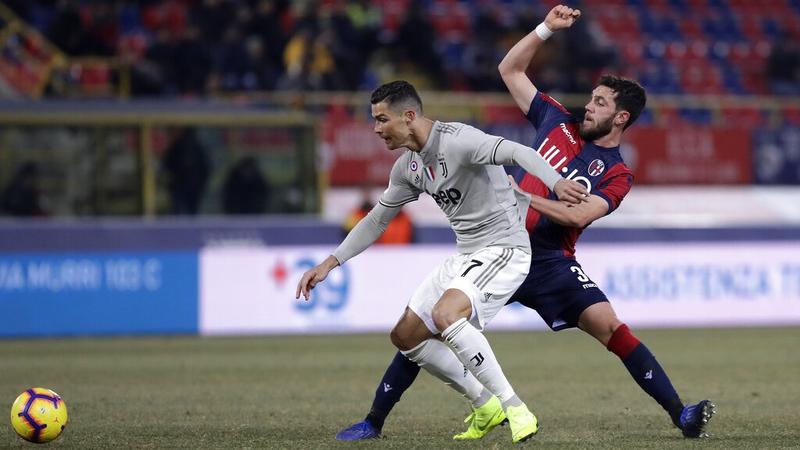 Juventus' Cristiano Ronaldo, left, challenges for the ball with Bologna's Arturo Calabresi during a round of 16 Italian Cup soccer match between Bologna and Juventus at the Renato Dall'Ara stadium in Bologna, Italy, Jan 12, 2019. (LUCA BRUNO / AP)

Cristiano Ronaldo was among several regular players who didn't start though defending champion Juventus nevertheless eased into the quarterfinals of the Italian Cup on Saturday.

Juventus, which achieved the league and cup double in the past four seasons, won at Bologna 2-0 and will next face Atalanta or Cagliari.

Juventus coach Massimiliano Allegri said on Friday that Ronaldo would play at Bologna and insisted the superstar was calm after being asked this week by police to provide a DNA sample in a rape investigation. Kathryn Mayorga alleges Ronaldo raped her in his Las Vegas hotel room in 2009 and paid her to keep quiet.

Ronaldo was in the reserves with fellow forward Paulo Dybala, while Mario Mandzukic, Juan Cuadrado, Andrea Barzagli and Joao Cancelo were injured. He was brought after the hour mark with the match all but won.

Bologna gifted Juventus the opener in the ninth minute as goalkeeper Angelo Da Costa collided with teammate Arturo Calabresi as they both went to defend Mattia De Sciglio's long ball, allowing Federico Bernardeschi to fire into an open net.

Bologna wasted chances to level and Juventus doubled its lead four minutes into the second half when Douglas Costa's shot was deflected and teenager Moise Kean fired in the rebound.

Juventus is scheduled to travel to Saudi Arabia for Wednesday's Italian Super Cup against AC Milan.

Patrick Cutrone came off the bench to fire AC Milan into the quarterfinals.

The Italy forward, who turned 21 this month, scored twice in extra time to help Milan win at Sampdoria 2-0.

Milan, which lost last year's final to Juventus, will face Napoli or Sassuolo.

Milan and Sampdoria had their chances in regular time. Gonzalo Higuain even had the ball in the back of the net for Milan but it was ruled out for offside.

Gennaro Gattuso sent on Cutrone at the start of extra time and he threw on Andrea Conti in the 99th minute. Those two substitutes combined three minutes later to give Milan the lead as Cutrone volleyed in Conti's cross.

Cutrone all but sealed the result for Milan six minutes later when he dinked another volley over Sampdoria goalkeeper Rafael.

Lazio eased into the quarterfinals after thrashing third-division side Novara 4-1.

Ciro Immobile scored twice against one of the only two Serie C sides left.

The other, Virtus Entella, also travels to the Italian capital, to play Roma on Monday.

Lazio plays Inter Milan or second-division Benevento in the next round.